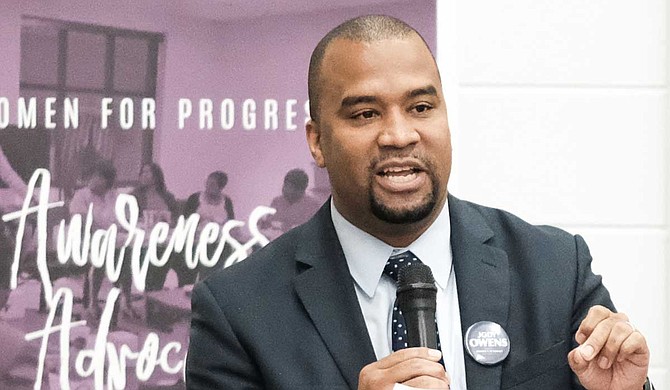 Jody Owens will take over the Hinds County district attorney's seat from Robert Shuler Smith. He won the Aug. 6 primary with no Republican challenger in November. Photo by Ashton Pittman

Owens graduated from Jackson State University and earned his law degree at Howard University School of Law. He is the former director and managing attorney of the Mississippi office of the Southern Poverty Law Center, and he has litigated class-action lawsuits on behalf of children and adults on matters like mass incarceration, private prisons and the school-to-prison pipeline.

He ran on a SMART Justice platform, which includes a re-entry program for ex-offenders, mental health and rehabilitation treatment for those with addiction, support to the families of those affected by violence and collaborating with community organizations to find ways to reduce crime. He also pledges to prosecute violent offenders.

Owens positioned himself as someone who is working to change the system from the inside. "What makes me unique is that I understand the totality of the system because I've been a system changer, particularly the juvenile system in Mississippi," he told the Jackson Free Press at a June 24 press conference.

At an Players Coalition forum at the Mississippi Museum of Art on July 17, Owens said he was running because Hinds County has a broken criminal-justice system that does not work for victims or defendants of crime. Instead of making communities safer, mass incarceration is making the situation worse, he said

"If you look at things like the war on drugs (and) the crack epidemic, by taking all these individuals out of homes and destroying communities, we didn't get safer," he said. "In fact, it didn't stop crimes from occurring. More crimes occurred, so we have to acknowledge and be honest as a society that we got that wrong."

Throughout his campaign run, Owens received endorsements from various local elected officials and community organizers including Mayor Chokwe A. Lumumba, as well as nationally with singer John Legend and Real Justice PAC co-founder and activist Shaun King backing him. King congratulated Owens Tuesday night on Twitter, calling him "one of the best leaders in the country."

King also released this statement: "Jody has been a tireless advocate for justice - fighting to protect voting rights, fund public schools, and close private prisons. He is the best person for the job, and tonight's results reflect a clear mandate to bring about real change. The Real Justice PAC is proud that we endorsed him. This is a huge step forward for the movement to reform America's justice system by electing district attorneys across the country who will end mass incarceration, fight racism, and hold police accountable."

Sheriff's Race to Runoff, Along with Other Hinds Races

In the race for Hinds County sheriff, two men with strong name recognition are heading into the Aug. 27 because neither cleared the 50%-plus-one-vote threshold. Former Jackson Police Chief Lee Vance led a long roster of candidates with 38 percent of the vote with current Sheriff Victor Mason drawing 32 percent. Colendula Green, a Jackson Police Department public information officer, was a district third with 14%. Vote percentages for all other candidates were in the single digits.

Incumbents will keep their seats in some other Hinds County races with no Republican challengers, including coroner Sharon Grisham-Stewart and tax collector Eddie Fair.

Two of five Hinds County supervisors races will definitely go to the Aug. 27 runoff with David Archie and incumbent Darrel McQuirter squaring off in District 2; and incumbent Bobby McGowan and Patty Patterson in District 5. In District 3, returns show Credell Calhoun with 50%, and Silas Bolden Jr. with 24%, but without the race called for Calhoun, the husband of the outgoing, 27-year supervisor Peggy Hobson Calhoun. Credell Calhoun, a state representative, chose to run for his wife's seat instead of returning to the Mississippi Legislature. 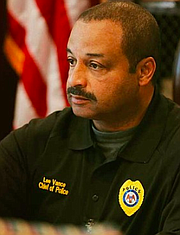 In District 4, Vern Gavin won the seat held by Supervisor Mike Morgan, a Republican, with 58% of the vote over Bryan White. Incumbent Robert Graham kept his District 1 seat with 84% over challenger Fred Nelson Jr.

Incumbent Don Palmer kept his District 1 Justice Court judge seat over challenger Sirena Wilson. In District 2, incumbent Tabitha Britton-Porter is headed to a runoff with Eddie Robinson; and Joanna Archie and Kenny Lewis will face off in the Aug. 27 runoff for the District 4 seat.

For the District 2 constable's seat, incumbent John Brown, a Democrat, won 71% of the vote over two challengers.

In Jackson-area legislative primary races, some candidates won outright, and others are headed to a runoff. In the District 22 Senate contest, former Republican operative Hayes Dent is heading into the November election. On the Democratic side, Joseph Thomas and Ruffin Smith are in the Aug. 27 runoff. 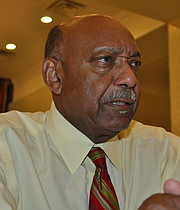 In the House, Democrats Ronnie Crudup Jr., Zakiya Summers were big winners. Crudup took 71% over three women challengers to keep the seat of now-Judge Adrienne Wooten that he won in a special election in the spring. Summers won 55% over Cassandra Welchlin and Lonnie Holmes.

On the Republlican House side, incumbents Jason White and Joel Bomgar won their primaries, although Bruce Bartley took 44% against Bomgar.

All the above percentages come from uncertified returns and may be updated.

The Aug. 27 primary runoffs are open to any registered voter. However, if you voted in one party's primary in yesterday's election, you cannot switch parties and vote in the other runoff.

"If you voted in the Republican primary yesterday, you cannot vote in the Democratic primary in three weeks and vice versa," Hinds County Republican Party Chairman Pete Perry told the Jackson Free Press today. "If you did not vote, you can vote in whatever primary."

CORRECTION: The above story is corrected. We originally said that Mike Morgan was vacating his Hinds supervisor's seat, but as a Republican, he will face off against Vern Gavin in November. We apologize for the error.

Read more about Hinds County candidates here and listen to Let's Talk Jackson Politics podcasts with many candidates, with more to come with candidates in the runoffs and general election in November.

CLARIFICATION: This piece has been edited to reflect a clarification. While the NFL is a supporter of the Players Coalition, the two are actually separate entities.