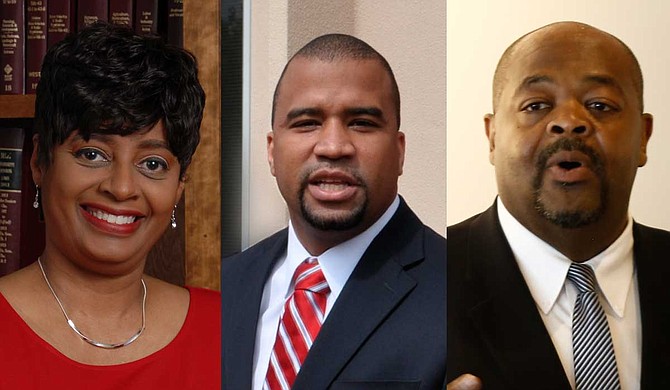 Candidates Darla Palmer (left), Jody Owens (center) and Stanley Alexander (right) all agree that the justice system in Hinds County needs changes, with two even indicating that the system, where it currently stands, is "broken"—a characterization Palmer rejected in her recent Let's Talk Jackson Politics podcast. Photos by Trip Burns and Imani Khayyam

The national trend of reforming the criminal-justice system, even from inside prosecutors' offices, emerged dramatically in Hinds County during the current campaigns for the next district attorney, who will be decided in the Aug. 6 Democratic primary, or a run-off if needed. Robert Shuler Smith, a candidate for governor, is vacating the seat after three terms plagued with controversy, with many accused sitting in jail for years before trial and even being prosecuted himself multiple times, including an acquittal for selective prosecution.

Candidates Stanley Alexander, Jody Owens and Darla Palmer all agree that the justice system in Hinds County needs changes, with two even indicating that the system, where it currently stands, is "broken"—a characterization Palmer rejected in her recent Let's Talk Jackson Politics podcast.

Still, the capital city is experiencing homicide rates it has not seen since the crack era, meaning that criminal-justice reform—especially of the "decarceral" kind that Owens supports—must be balanced with citizens' concerns about violent criminals on the streets.

"Jackson has serious crime problems. We have crime problems that are not going to be pled away," Stanley Alexander said in his Let's Talk Jackson Politics podcast.

All three candidates pledge to prosecute violent offenders, with Alexander, the only candidate with felony-prosecution experience, agreeing with Owens, a long-time civil-rights attorney, that non-violent offenders should get options other than going into the system, which studies show make it more likely for younger offenders, especially, to commit worse crime later. Palmer took the toughest stance about fighting crime, dismissing the need for Owens' vision of decarceral reform, but still supporting giving low-level offenders a chance to succeed after punishment, including later expungements of criminal records. 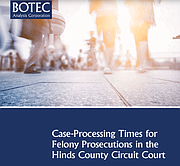 All three candidates talked in their podcasts about how they would repair what is not working well in the system, however, with all citing the need for more organization, communication, transparency, and efforts among the district attorney, law enforcement and judges to end the sometimes-years-log pre-trial detention of accused who sit in jail without a trial, as described in the 2016 BOTEC Analysis study of Jackson crime. "The Hinds County Circuit Court resolves only 9% of felonies in 90 days, 14% in 180 days, and 55% within 365 days," researchers wrote in the detailed report. The Mississippi maximum is supposed to be 270 days.

One accused man has been in the Raymond jail for six years now, Sheriff Victor Mason said in his elections podcast.

Those backlogs cost the county money to house and feed the accused, violate their rights to a speedy trial, and create conditions for violence and destruction in the facility, as nearly all candidates for both DA and sheriff have pointed out to the Jackson Free Press in podcasts to date.

'We Didn't Get Safer'

"We're hosting this forum to hear directly from the Hinds County DA candidates on these issues and how they plan to improve public safety and create a fairer justice system in Jackson," Davis said in a press release.

The Players Coalition is a nonprofit that NFL Players Anquan Boldin and Malcolm Jenkins founded to make an impact on racial inequality and social justice.

Owens was in the hot seat, taking questions from the hosts on topics such as incarceration, sentencing, police accountability and cash bail. He said he is running because Hinds County has a broken criminal-justice system that does not work for victims or defendants of crime. Instead of making communities safer, mass incarceration is making things worse, Owens said.

"If you look at things like the war on drugs (and) the crack epidemic, by taking all these individuals out of homes and destroying communities, we didn't get safer," he said. "In fact, it didn't stop crimes from occurring. More crimes occurred, so we have to acknowledge and be honest as a society that we got that wrong."

Owens said that far too often, the justice system focuses on insignificant crimes when it should focus on issues that are "terrorizing" the community. He does not believe that prosecutors should try the recreational use of certain drugs, like marijuana. As the next district attorney, he would work with law-enforcement officers to determine what that looks like, he said.

"Not only are we charging them for something that's legal in other parts of this country, but we're punishing them for being poor. So that individual is losing his or her apartment, car or job," he said. "We have to be smart about who we prosecute and why."

Owens said that if elected, he will implement drug courts and will not focus on criminalizing addiction, but instead on getting people the services they need to get better. His office would also create a special victims unit that addresses domestic violence, sex crimes and other life issues.

On police accountability, Owens said no one is above the law, and his administration would investigate any allegations of police misconduct and be transparent with the public. He wants a focus on improving the perception that communities do not need or want police.

"I think you build trust by having everybody judged by the same standards, and second by ensuring that you're transparent about those investigations," Owens said.

'Not Gone Be a Sit-in-the-Office District Attorney'

On July 22, Alexander, a former assistant district attorney under then-DA and now Hinds County Circuit Judge Faye Peterson, talked on his podcast about what he sees as broken in the system as a seasoned prosecutor on the county and state level. On Peterson and Alexander's watch, county records showed that, in 2006, the circuit-court system actually received 1,488 case dispositions, which included 933 guilty pleas, 236 revocations, 38 jury trials and 190 remands. Of the 38 cases that went to trial, 32 ended in guilty verdicts and six not-guilty verdicts—an 84-percent conviction rate.

Alexander, who now directs public-integrity prosecutions for the attorney general's office, which has included current DA Smith, detailed reasons for the current pretrial backlogs, from people not working hard enough due to poor leadership, to a lack of a system in the current DA's office, to the difficulty of prosecuting violent crimes creating delays. Alexander was clear that he does not want non-violent offenders clogging the system. "I believe that all comes with the experience of knowing what works best for what type of offenders. I'm a big supporter of alternative sentencing, pre-trial diversion, non-adjudication and drug court for folks with drug-addiction problems," he said.

Pre-trial diversion is an alternative to prosecution that diverts certain offenders from traditional criminal-justice processing. Non-adjudication allows a first-time, nonviolent defendant to complete certain conditions and avoid a conviction on their record.

One of the things Alexander believes will speed up the criminal-justice system in Hinds County is weeding out nonviolent offenders, whether in cases involving drug possession, crimes related to drug addiction or property crimes. Nonviolent offenses should not get to the indictment process, he said.

"You can get those folks helped and get them pointed in the right direction without clogging up the courts docket," he said, pointing to examples of when he was Peterson's ADA. Alexander said his experience as the only candidate who has prosecuted a felony case at trial is important because with the amount of murder, armed robbery and aggravated assault cases in the county, prosecutors are going to have to try those cases.

"These cases take a long time to move through the system, and this is how the docket gets clogged up," Alexander said. "That's why you need someone that is trained in trying cases because we don't get do-overs. If someone is found not guilty, they're not guilty regardless. The Constitution says we can't try them again, so we have to get it right the first time."

If voters elected Alexander as district attorney, his role would be to make sure there are qualified people in the courtroom, he said.

"You need seasoned prosecutors in each courtroom, and you need young lawyers in there willing to learn to help and to bring (it) up," he said. "None of us are getting any younger, but the unique thing that I bring to the office is that I have trained young lawyers, trained prosecutors, and I can do that, as well as prosecute cases."

Alexander also pledges to try cases himself as district attorney, which he considers one of his strengths. "I'm not gone be a 'sit-in-the-office' (kind of) district attorney. I wouldn't want to take a salary for not working and prosecuting cases," Alexander said.

'The DA's Office is a Voice for the Victim'

The final candidate, Darla Palmer, was also a guest on the "Let's Talk Jackson" podcast on July 22. She has served as a public defender, a prosecutor, an attorney in private practice and a staff attorney for the City of Jackson. She is running because she is concerned about the rise in violent crimes in Jackson and would like to see cases moved quickly through the district attorney's office, she said. She wants to instill a sense of respect in the district attorney's office.

"I can give more insight as to how to manage these cases and how to move them along because I've represented so many individuals charged with these crimes, and I feel that I have a knack for dealing with someone charged with a particular crime," Palmer said.

She believes that Hinds County is missing an attitude of respect among many people. Right now, there is a general attitude that there will be no consequences for the actions a person takes when they commit a crime, she said.

"We need to send a message out in Hinds County that we now have a different expectation about what we want to happen in Hinds County and what the results will be. Once you start that message of respect, then when an individual comes through the system, there is no ignorance of the law," she said.

Alexander and Owens both talk about fixing the broken justice system in Hinds County; however, Palmer said the word "broken" is not the word she would use to describe the justice system.

"The DA's office prosecutes cases, meaning we are involved in the institution of criminal acts against a person, but law enforcement or the sheriff's office is responsible for the jail," Palmer said. "If we're working together, it'd be better connected rather than broken. I just don't think it's flat out broken. You have to work in the system to know that."

"You set a goal (that) these are the types of cases, these are the number of cases that we're trying to move on a daily basis and have constant contact with the lawyers in your office to make sure cases are being moved," she said.

Palmer said as a defense attorney, she does not want any lingering cases.

"It would be my first order of business to go in and look at what we have that's outstanding and what we need to move quickly. The DA's office is a voice for the victim," she said.