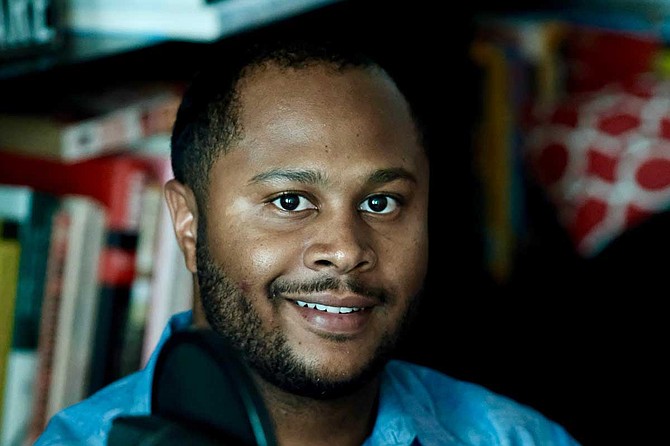 Marcus Williams sat down for a Let’s Talk Jackson podcast in June to discuss his campaign plans for the state. Photo by Ashton Pittman.

Jackson Mayor Chokwe Antar Lumumba endorsed Marcus Williams, a defense attorney and candidate for Mississippi Senate District 26 and former president of the Young Democrats of Mississippi, during a press conference at the Capitol this morning. Longtime Democratic incumbent John Horhn currently holds the seat, which represents parts of North Jackson, southern Madison County and Hinds County to the West, reaching parts of Clinton and Edwards, Miss.

“As I consider all of the needs of the city of Jackson has, it is important that we have allies in our state capitol to move forward our agenda. We have developed a strategic plan that is aimed at growing Jackson, making it a welcoming city and aimed towards economic development,” Mayor Chokwe A. Lumumba said. “In order to achieve those goals, it is important that we have true allies that put the people before the politics. That is why I am endorsing Marcus Williams for senate and I am happy to stand here not only because I believe in his ideas.”

Williams said Lumumba’s endorsement means a lot. He has known the mayor for a long time and is excited about what he is doing at city hall, he said.

“The mayor’s endorsement is a very important one, coveted by folks. His opinion matters. He’s an important part of Jackson. I want to make sure I get the endorsement of every elected official in my district and make sure that they know I’m gone work for them and fight for them.”

Among other issues, Williams is a strong advocate of criminal-justice reform, saying on his Facebook page that "66,000 Mississippians are behind bars or under criminal justice supervision and the majority of them are people of color. For the past 40 years, incarceration rates have increased exponentially—its time for CHANGE!"

Williams supports collaboration to expand reentry and transition programs; training and data-driven solutions; "pragmatic programs" to guide young people; stronger support for domestic-violence survivors; and protecting Mississippi from discrimination based on their criminal history and record.

He spoke extensively about his criminal-justice platform, and other issues, in his Let's Talk Jackson Politics podcast recently.

Owens said he is running on the "SMART justice" platform for the seat vacated by outgoing District Attorney Robert Shuler Smith. He wants to implement a re-entry program for ex-offenders to find jobs and pursue their education; use mental-health and rehabilitation programs to help those with addictions get treatment; provide support to victims and their families to help rebuild families and communities affected by violence; and collaborate with clergy and community organizations to establish interventions that are effective in reducing crime prison and courts.

"For me and the people who believe in a fair and just system, it's realizing that you stop crime by making sure people are not going into this repeated cycle," Owens told the Jackson Free Press on June 24.

The activist's national work includes organizing a social-media campaign to identify men who assaulted Deandre Harris in a parking garage during the white-supremacist Unite the Right rally in Charlottesville, Va., in 2017.

King also raised $60,000 for Tamir Rice's family. Rice was a 12-year-old black boy whom police officers shot and killed in a Cleveland, Ohio, park in 2014. A neighbor called to report that a young man was drawing a gun on people but told the dispatcher the gun might be fake. Following the incident, the neighbor's assumption turned out to be true.

The activist also used his social media to spread awareness of the shooting death of Jazmine Barnes. In December 2018, Barnes was riding in the car with her mother when Larry D. Woodruffe shot and killed her in a drive-by shooting in Houston, Texas. The getaway driver, Eric Black Jr., was also charged in Barnes' murder. As a journalist, King has written for The Intercept, Daily Kos, New York Daily News and Harvard Law School's Justice Collaborative.

In 2018, he founded the Real Justice PAC, which supports city- and state-level prosecutors working to reform the criminal-justice system. He announced his endorsement of Owens on social media.

"Hinds County is ready for a change, and Jody is the right person for the job," King said on social media.

Owens told the Jackson Free Press on July 18 that his team is excited and proud of the endorsement from King and the Real Justice PAC.

"It's saying that our message is real to so many people who didn't believe in SMART justice and that you can be safer and prosecute less. It's an affirmation that our vision for a safer Hinds County makes sense," he said.

Owens, long-time prosecutor Stanley Alexander and defense attorney Darla Palmer face off in the Aug. 6 Democratic Party primary. Democratic and Republican candidates in other races are also on the ballot, including candidates in the races for governor; attorney general; Mississippi House and Senate seats; and more. If no candidate in any of those races wins 50% or more among primary voters, the top two vote-getters go head-to-head in an Aug. 27 runoff. The general election is Nov. 5.