Teacher Pay in Limbo as Mississippi Senate Balks at $4,000 Raise 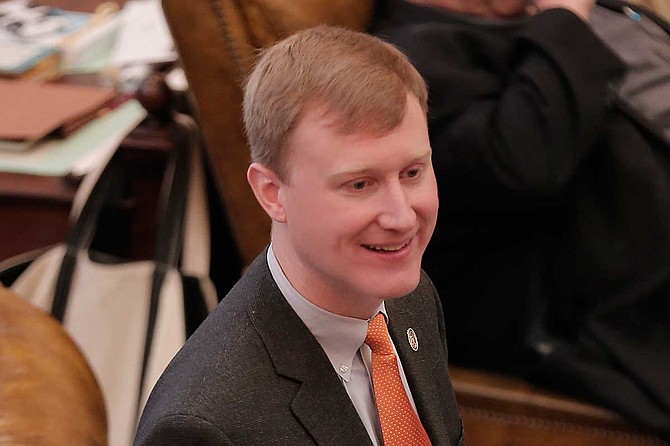 Rep. Joel Bomgar, R-Madison, said he could not support a teacher pay raise bill unless it joined cuts in "wasteful spending." Photo by Imani Khayyam.

JACKSON — The fate of a bill that could grant Mississippi's public-school teachers a $4,000 pay raise over a two-year period remained uncertain Monday morning as lawmakers from both chambers of the state Legislature worked to reach an agreement.

When the bill came before the House, though, Democrats and 20 Republicans balked at the paltry sum.

"Now I'm telling you, there's no group of people in this state more important than the professional educators that teach our children and grandchildren," Rep. Steve Holland, I-Plantersville, said on the House floor on March 11. "So bah humbug on $500 a year. You ought to be ashamed if you vote for it. So let's start with the high road."

On March 19, the Senate declined to concur with the change, sending the bill to conference, where a group of lawmakers from the House and Senate must negotiate a final agreement.

That likely means the Senate is not prepared to agree to a $4,000 pay raise. When Holland argued for amending the bill on March 11, he said that, while he hoped the Legislature could achieve that raise, it would at least be a starting point for a higher raise than the Senate's original proposal. In conference, legislators could theoretically increase or decrease the sum.

'Too Bad My Name's Not Nissan'

Over the weekend, some Mississippi educators expressed their displeasure with the process on Twitter.

"Hearing lots of chatter that our $4000 payraise will be a no-go, showing us once again that our legislators aren't working for their constituents or the future of Mississippi," wrote Toni Coleman, who teaches at Central Hill High School in DeSoto County. "Sad day but an even sadder one for them come Election Day!"

"Too bad my name's not Nissan," replied Tom Tucei, a teacher at Picayune Memorial High School in Pearl River County.

In 2014, lawmakers used education funds to provide $1.3 billion in subsidies to the automaker's plant in Canton.

Mississippi's educators last saw a pay raise the year before the 2015 statewide elections, when legislators raised teacher salaries by $2,000 over a two-year period. With the 2019 statewide elections now looming, legislators would need to raise teacher salaries by at least $3,000 just to keep up with inflation since the last pay raise five years ago.

"Election year pay raises aren't enough if we plan on retaining the teachers we have and recruiting the ones we don't," he tweeted. "They need competitive salaries, opportunities for growth, and a reduced testing burden with less and more efficient tests."

Mississippi is facing a teacher-shortage crisis, with a 40-percent decline in the number of education majors at Mississippi universities pursuing teaching degrees or certificates since 2014.

The University of Southern Mississippi and Mississippi Gulf Coast Community College announced a partnership last month to help alleviate the crisis with the launch of a program that aims to get teachers as young as 20 in the classroom.

'No Wonder We're Leaving the Profession in Droves'

Earlier this month, several teachers vented to the Jackson Free Press about the proposed pay raises.

"(The $1,000 raise) is a joke and a slap in the face to all teachers in Mississippi," Melanie Eason, who teaches Advanced Placement U.S. history at Purvis High School in Lamar County, said on March 11. "No wonder we're leaving the profession in droves. I personally work two other part-time jobs to supplement my income. They can keep their $1,000. I would settle for just being treated like a respected professional with a college degree."

"When I think about all my uncompensated hours I devote to my job, no, I don't think either is enough," she said. "It almost feels preemptive. There have been so many successful teacher strikes across the country lately. Maybe they're hoping we will be sated by this small amount instead of fighting for what we deserve."

Nathaniel Smith, a Spanish teacher at Columbia High School in Marion County who works a second job, told the Jackson Free Press on March 11 that he was considering "quitting teaching and going back to slinging pizzas" at Domino's, where he previously worked as an assistant manager. There, he said, he made almost as much as he does now as a teacher.

"It's a less stressful environment, I get overtime pay, flexible hours, and I never had to bring it home with me," he said.

After the House amended the Senate bill on March 11, all but two representatives voted for the pay-raise bill. One of those House members was Rep. Joel Bomgar, R-Madison. On his website, he wrote that while he supports "ensuring that state employees are compensated fairly," he "could not support this bill because it increased state spending without a commensurate reduction in unneeded programs."

"We cannot continue asking taxpayers to pay more of their hard-earned dollars while we still spend millions on programs that are outside the proper role of government," he wrote. "Reducing wasteful spending is the appropriate way to increase compensation for state employees, not simply asking the taxpayers to pay more."

During debate over the bill earlier this month, Hinds Democratic Rep. Kathy Sykes brought up Mississippi's lottery law that the Legislature passed in a special session last year. It established a state lottery, funds from which will go toward infrastructure. Democrats had pushed for those funds to go toward education.

"Some other states, when they passed a lottery, they put education as a priority for the lottery funds," Sykes said, suggesting the Legislature should reconsider sending those funds to education instead.

Lawmakers had planned to end the legislative session sometime this week, which would be earlier than planned, but negotiations over teacher pay and several other matters could prolong the session closer to its original April 7 end date.