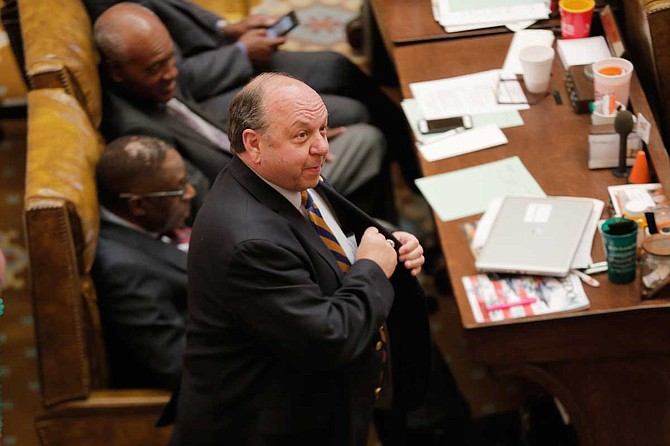 Democratic House Rep. Steve Holland successfully argues for his fellow legislators to amend a teacher pay bill to raise salaries by $4,000 instead of $1,000 over two years. Photo by Imani Khayyam.

JACKSON — Mississippi State Rep. Steve Holland "cried with joy" as he watched his grandson participate in a school program at Tupelo's Joyner Elementary School a few weeks ago. The affection quickly subsided once the program was over, though, as teachers besieged the local legislator over a teacher pay-raise bill that increases salaries by $1,000 over a two-year period.

"Are you kidding me? $500 a year?" one educator educator said, incredulous over a raise that amounts to just an extra $41.67 each month. "You ought to be ashamed of yourself."

"That ain't my idea," the folksy representative replied. "Not at all."

Holland, who recently left the Democratic party to become an independent, recounted that story as he stood in front of his colleagues in the House Monday, holding his smartphone up to the mic to let them hear the sounds of his grandson and his classmates singing. Then, he asked them to amend the bill to increase the pay raise to $4,000 over two years, starting in 2020.

"Now I'm telling you, there's no group of people in this state more important than the professional educators that teach our children and grandchildren," he said. "So bah humbug on $500 a year. You ought to be ashamed if you vote for it. So let's start with the high road."

The amendment does not necessarily mean the final bill will include such a significant pay increase. Holland admitted that negotiations with the Senate could result in a smaller raise.

"This is your opportunity to shoot for the stars and do something that will be the most powerful thing that comes out of this session and any session in years to come," Holland said.

'Going Back To Slinging Pizzas'

Mississippi teachers told the Jackson Free Press that they agreed with critics of the $1,000 raise, and they had their own criticisms of even a $4,000 raise.

"(The $1,000 raise) is a joke and a slap in the face to all teachers in Mississippi," Melanie Eason, who teaches Advanced Placement U.S. history at Purvis High School in Lamar County, said Tuesday. "No wonder we're leaving the profession in droves. I personally work two other part-time jobs to supplement my income. They can keep their $1,000. I would settle for just being treated like a respected professional with a college degree."

"When I think about all my uncompensated hours I devote to my job, no, I don't think either is enough," she said. "It almost feels preemptive. There have been so many successful teacher strikes across the country lately. Maybe they're hoping we will be sated by this small amount instead of fighting for what we deserve."

Nathaniel Smith is a Spanish teacher at Columbia High School in Marion County, where he says he makes about $35,000 a year before taxes. Like Eason, he works a second job, which he says is necessary to care for himself and his nephew. Even a $4,000 increase would not be enough, he told the Jackson Free Press.

"It's disgraceful for a highly qualified professional, one of the noblest of professions, to be treated with such disregard," he said Monday. "The people who educate the future leaders of our state are being written off as insignificant, and it speaks volumes about the opinion politicians, both Democratic and Republican, hold about a teacher's worth. Are we not worth investing in?"

"I work all the time, and am mentally and physically exhausted all the time, but I couldn't make it without my second job," he said. "Being able to put all of my energy into only teaching, that is what I consider fair and appropriate."

Before teaching, he worked as an assistant manager at Domino's in Columbia, where he said he made "almost as much" as he does teaching.

"I've thought about quitting teaching and going back to slinging pizzas," he said. "It's a less stressful environment, I get overtime pay, flexible hours, and I never had to bring it home with me."

If things don't change for teachers in Mississippi, Smith said, he will not continue to teach.

"I just can't do it and work another job the rest of my life," he said. "My mental and physical health won't allow it."

"I understand it's an election and whatever, and people have opponents, but we've got to balance the budget, and we've got other state employees who need pay raises," Bennett said.

"You offended me when you said this is an election-year issue," he said. "It's not with this man," he said of himself. "It's not at all. If I had a chance, I would have done this the year before and the year before. This is the most critical issue of this election."

Earlier, another member asked Bennett why he had settled on $1,000.

Hinds Democratic Rep. Kathy Sykes brought up Mississippi's lottery law that the Legislature passed in a special session last year. It established a state lottery, funds from which will go toward infrastructure. Democrats had pushed for those funds to go toward education.

"Some other states, when they passed a lottery, they put education as a priority for the lottery funds," Sykes said. "Do you think we need to revisit that and make education a priority?"

"That was a decision this body made," Bennett said, offering no further thoughts.

The $1,000 raise would not have been enough to keep up with inflation since the last time legislators raised teacher pay by $2,500 the year before the 2015 statewide elections. Teachers would need to make nearly $47,500 to equal, in 2019 dollars, the 2014 purchasing power of the $44,659 they made after that raise fully kicked in, the U.S. Inflation Calculator shows. That would require a raise of 6.3 percent—not the 2.2 percent increase this bill grants.

Mississippi ranks near the bottom for teacher pay nationally, and the Legislature consistently underfunds education. That has led to an exodus of teachers from the state, creating a growing teacher-shortage crisis.

To alleviate the shortage, the presidents of the University of Southern Mississippi and the Mississippi Gulf Coast Community College worked out an agreement last month that will put teachers as young as 20 years old in elementary and special-education classrooms.

Lora Toney, a kindergarten teacher in Laurel, told the Jackson Free Press on Monday teachers can boost pay by doing things like obtaining advanced degrees and certifications, but moving to another state is often easier.

"Why would we stay here and do those things when we can cross state lines and bump our salary without doing those things?" she said.

Toney would move to Alaska, she said, but she does not want to uproot her sons.

Supporters of the more robust pay raise hope it will help alleviate the teacher shortage. In a statement Monday evening, the House Democratic Caucus praised its members for unanimously supporting the amendment.

"Although this amendment may mean a conference committee will determine the final amount of any raise, we believe that momentum is there to achieve a significant and much-deserved pay raise for our teachers," Democratic House Minority Leader David Baria said. "Mississippians know that we are in a teacher shortage crisis, and the best way to help solve that problem is by offering our teachers reasonable salaries."

Candidates for statewide office in 2019 have also spoken up about the need for teacher pay raises. DeSoto Rep. Robert Foster, who is running for the Republican nomination for governor, and Oxford Rep. Jay Hughes, in the race for lieutenant governor, both criticized the $1,000 raise as too little.

At a Stennis Institute luncheon in Jackson on Feb. 22, Secretary of State Delbert Hosemann, a Republican candidate for lieutenant governor, said he would seek yearly pay raises for teachers.

"If I'm lucky enough to be there, I intend to raise teacher salaries each year—not just on election years," he said.

Correction: An earlier version of this story misidentified Rep. Steve Holland as a Democrat. He left the Democratic Party and became an independent earlier this month. We apologize for the error.