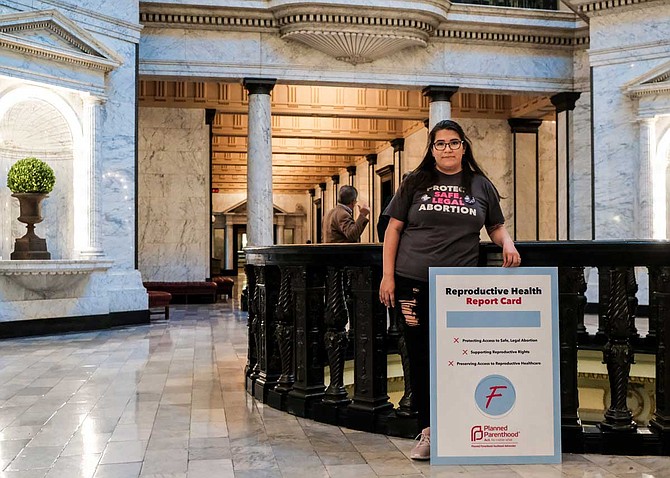 Daniella Dismuke-Rojas, a volunteer with Planned Parenthood Southeast, traveled from the Mississippi Gulf Coast to Jackson on March 14, 2019. Photo by Ashton Pittman.

JACKSON — When Daniella Rojas woke up one morning in October 2017, she had no idea that she would finish the day a married woman. At the Harrison County Courthouse later that day, though, she stood as a sudden bride facing her groom, Harley Dismuke. His tie-dye bowtie matched her rainbow shoes. He wore cowboy boots. Around them stood a handful of friends and family, including Daniella's dad and his girlfriend, whom they had hastily assembled to join them as they recited their vows.

Earlier that day, the couple received a shock when they learned that the 5th U.S. Circuit Court of Appeals had decided to  allow a Mississippi law popularly known as HB 1523 to take effect. That law, which the Legislature passed in 2016 as the "Protecting Freedom of Conscience from Government Discrimination Act," enshrines into law the right of businesses to discriminate against LGBT people on the basis of the owners' religious beliefs about marriage and gender identity.

That law proved a double threat for the couple. Harley is transgender, and Daniella, who met Harley before he came out, identifies as queer. HB 1523's enactment, the couple feared, could precipitate a domino effect endangering their rights. They wanted to make sure to get married while they still could—just in case.   So on Oct. 28, 2017, they contacted the justice of the peace, rushed to the courthouse, and became the Dismuke-Rojases.

About a year and a half later, Daniella Dismuke-Roja is now an activist who is challenging laws that she believes similarly threaten the rights of Mississippians. On March 14, she traveled to Jackson, where she joined a group of Democratic state legislators and Planned Parenthood activists to protest a Senate bill that would ban abortions after a fetus' heartbeat becomes detectable—at about six weeks.

"I think it's extremely important that the government stay out of our bodies and out of our uteruses, and let us make the decision when we have children and if we have children," she told the Jackson Free Press at the Capitol. "It crosses more boundaries than just women. This involves children, men, everyone."

When the Mississippi House passed its version of the fetal heartbeat bill in February, nine Democrats joined all but one Republican to support it. The lone Republican "nay" voter, Hattiesburg Rep. Missy McGee, explained that, while the bill does include an exception for the life of the mother, it has no exceptions for rape, incest or severe fetal deformities.

At the Capitol, Daniella said that her experience as a queer woman informs her views on anti-abortion legislation. She grew up in a conservative but religiously mixed family, with a mother who was a member of Assemblies of God, a pentecostal denomination, and a Catholic father.  When she was 15, she said, her mom put her in a class at the church called "True Love Waits."

Not long after the class, Daniella accepted herself as a queer woman. When she came out to her mother, her mother told her that her sexuality was akin to that of a child molester.

"I love my mom to pieces," she said, adding that while they still have a relationship, her queerness remains "the big pink-and-white elephant in the room."

She first hooked up with Planned Parenthood when she met activists with the organization at Biloxi's pride parade last summer. Fighting for reproductive rights is just one facet in her broader opposition to what she sees as state conservatives' efforts to control Mississippians' sexuality.

"I came out in the LGBT community and just realized that there are a lot of people who don't get the same rights as the majority of people down here in Mississippi," she said.

Three days before Daniella arrived at the Capitol, the House debated the Senate version of the bill. While it has slightly different wording, its effect would be no different than the now-dead House version, Planned Parenthood Southeast Director Felicia Brown Williams told the Jackson Free Press on March 12. The main difference is that passing the Senate version will give Lt. Gov. Tate Reeves bragging rights among conservatives as he seeks the Republican nomination for governor. In Mississippi, the lieutenant governor also serves as the president of the Senate.

During debate on March 11, Democratic legislators pressed Republicans about the cost of defending the ban in court if it becomes law. Since 2012, Mississippi taxpayers have spent nearly a quarter of a million dollars defending anti-abortion laws—unsuccessfully, so far.

Republican legislators like McComb Sen. Sam Mims, though, told their Democratic colleagues that defending it was a "small price to pay."

"Since we can spend money arbitrarily like that, you wouldn't be opposed to a pay raise for state employees?" Rep. John Hines, D-Greenville, responded.

Speaking at the March 14 demonstration, Williams criticized conservatives' dismissal of the costs.

Rep. Alyce Clarke, D-Jackson, stood on the steps as Williams spoke, wearing an olive pantsuit and, underneath the coat, a black, pink and white T-shirt with the words, "Protect Safe, Legal Abortion."

Mississippi Rep. Alyce Clarke (wearing an olive suit), D-Hinds, joined other pro-Roe v. Wade legislators and activists from Planned Parenthood for a demonstration on the steps of the Capitol on March 14, 2019. They were protesting a fetal-heartbeat bill that would ban abortions after six weeks.

Clarke, who is African American, told the Jackson Free Press that she does not recall her Republican colleagues discussing ways to reduce the state's infant mortality rate. "There are all of us who are concerned about wanting to eliminate abortions, but who don't want to do anything about sex education or about babies once they get here," the Jackson Democrat said. "We don't want to do anything about the babies once they get here. So that's, in my opinion, a major problem. If we had sex education in the schools, we would eliminate a lot of the need for an abortion."

Though Mississippi adopted a sex-education curriculum a few years ago, it only teaches abstinence, and not things like how to use contraception safely.

"I've been here for 34 years on the 20th of this month, and there has not been a year that I've been here that somebody didn't come up with a more restrictive abortion law," she said. "I want us to do some preventative things."

And, she said, "if you can't get pregnant, please don't vote on this bill." That, she said, includes Democrats like white Oxford Rep. Jay Hughes, who voted for SB 2116 on March 11. Hughes is the only Democrat running for lieutenant governor in 2019, and last month, he drew fire from his party's base after he, along with eight other House Democrats, voted in favor of the House version.

Hughes defended himself and the seven other white Democrats who voted for the ban by saying anti-abortion votes were necessary to keep white Democrats from going extinct in the Mississippi Legislature.   Days later on March 1, one of those white Democrats, Rep. Nick Bain, announced that he was switching to the Republican Party.

Clarke was not impressed by Hughes' defense. "I think we need to take another look at him," Clarke said. She declined to elaborate further.

On March 19, the Senate passed the amended version of the SB 2116, sending it to Gov. Phil Bryant's desk, who plans to sign it. "A beating heart clearly means life has begun and should be protected," Reeves said in a statement immediately after the bill's final passage. "I appreciate the work of both senators and representatives for getting this legislation to Gov. Bryant's desk."

On March 11, the sound of children singing filled the chamber as Rep. Steve Holland, D-Plantersville, held his smartphone up to a House floor microphone. He "cried with joy," he said, as he watched his grandson and classmates singing at a school program at Tupelo's Joyner Elementary School a few weeks earlier.

The affection quickly subsided once the program was over, though, Holland said, as teachers besieged the local legislator over a teacher pay-raise bill the Senate passed that increases salaries by just $1,000 over a two-year period. Teachers needed more, Holland said.

The Plantersville Democrat persuaded his colleagues, including 20 Republicans, to amend the bill, quadruple the amount and send it back to the Senate.  The Senate, which, like the House, is dominated by the Republicans, could still reject the amendment in conference. Teachers make less in raw dollars than in any other state. Even with adjustments for the cost of living, Mississippi is still No. 43 in teacher pay nationwide.

Several Mississippi teachers told the Jackson Free Press that even $4,000, the amount in the amended bill, would not be enough. Nathaniel Smith, a Spanish teacher at Columbia High School in Marion County, told the JFP on March 11 that he had considered "quitting teaching and going back to slinging pizzas" as an assistant manager at Domino's Pizza, where he said he made nearly as much, but also got overtime pay, flexible hours, had a less stressful environment and "never had to bring it home with me."

On March 13, the Senate passed House Bill 571, which removes criminal prostitution penalties from children under age 18. It allows law-enforcement officers who suspect a minor may be a victim of human sex trafficking to use youth courts to obtain custody of those children.

"We need to treat victims as victims, and not as criminals," Sen. Sally Doty, a Brookhaven Republican, told her colleagues.

When West Point Democratic Sen. Angela Turner-Ford asked Doty if she really did not believe a girl under 18 could engage in prostitution, Doty was curt.

The bill passed 42-9, with Turner-Ford voting no.

Sen. David Blount, a Jackson Democrat, opposed the bill. He told the Associated Press that keeping donor names secret "would be the biggest step backward" since Mississippi first took steps toward more transparency with its current public-records laws. The bill, he said, would make it more difficult for the public to see who is influencing their elected officials.

On March 19, the Legislature sent Senate Bill 2901, known as the "Landowner's Protection Act," to the governor's desk. The bill, backed mostly by Republicans and mostly opposed by Democrats, makes it harder for victims of crimes to sue when a crime happens on a business owner's property—even if the property owner failed to take "reasonable" safety efforts.

"I just think that small-business owners have a responsibility when they know or should know that somebody might come onto their property and commit a violent act, that they take reasonable steps," Democratic House Minority Leader said when his chamber debated the bill last month.