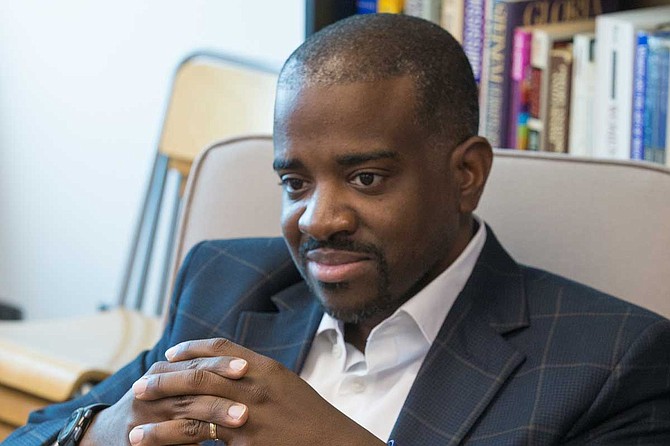 JACKSON — Mississippi House Speaker Philip Gunn called Ronnie Crudup, Jr. Tuesday evening to congratulate him on his victory after voters in south Jackson elected the local activist to fill a vacated seat in the House of Representatives. Within hours, Crudup sat in the Republican speaker's front-row seat on the House floor this morning, already wearing the pin House members customarily wear.

"Today, we are privileged to have with us Ronnie Crudup Jr., who won that election yesterday on the first go-round," Gunn said Wednesday morning. "Congratulations, we're glad to have you here."

The House's newest addition is not officially a member of the legislative body yet, though. First, Hinds County must certify the election results to the secretary of state's office. Then, Secretary of State Delbert Hosemann will certify the results and send them to Gunn, who will swear the new representative-elect in. Hinds has not yet sent its certified results, Assistant Secretary of State of Communications Leah Rupp Smith told the Jackson Free Press Wednesday morning.

Crudup is a Democrat, but had to run as an independent per Mississippi law, which does not allow party identification for candidates in special elections.

He is the director of New Horizon Ministries, a nonprofit, faith-based social-service Christian ministry that focuses on issues involving childcare, affordable home ownership, and community arts and sports. His father, Ronnie Crudup, Sr., is the pastor of New Horizon Church International in Jackson.

The representative-elect spends a lot of his time trying to reverse the devastating effects of white flight and demographic shifts in south Jackson, which left many homes abandoned and far-lower property values. He helps people buy and renovate homes.

"I just want to thank the voters of District 71 for trusting me with this vote, for winning this election," Crudup told the Jackson Free Press Wednesday morning. "I was very appreciative. I feel like we've been doing tremendous work in south Jackson and people know the work we're doing and what we've put in, so I feel like this is a testament to that."

Crudup said he expects to be sworn in Monday. The Legislature is ahead of schedule and plans to wrap up earlier than its planned April close; he expects the session will end within about a week of his swearing in. The deadline for lawmakers to introduce new bills passed weeks ago.

Still, he is already thinking about issues he wants to tackle next year.

"One of the biggest issues in this district is blight, dealing with blight housing," he said.

Crudrup ran for mayor in 2017, but lost to current Mayor Chockwe Antar Lumumba. In an interview with the Jackson Free Press that year, he talked about how he had worked with Hinds County and Habitat for Humanity to tear down dilapidated housing near three local schools on Greenview Drive, which he said looked like "a dump" before the renewal efforts.

As a legislator, Crudup said, he hopes to earn a position on the Housing Committee, where he would push for more legislative efforts to clean up "blight" in south Jackson communities and beyond.

"In our south Jackson neighborhoods, that's one of the issues that we definitely deal with and see across the board," he said Wednesday morning. "But also infrastructure. We know that infrastructure is a big issue in Jackson, and we just want to work hard to see what we can do about that."

As for current legislation, Crudup said teacher pay is among his priorities. Mississippi pays teachers less than any other state and is in the midst of a teacher shortage crisis and educators cross state lines for better pay.

"I know that's definitely not enough, but it's a start so that's one of the things, definitely, that I'm looking at that," Crudup said Wednesday. "And hopefully that can pass through this Legislature before it closes up."

On Monday, teachers also told the Jackson Free Press that even $4,000 is not enough of a raise. It would just be enough to keep up with inflation since the last time the Legislature raised teacher pay in 2014, but Mississippi would still lag behind almost all other states in teacher pay.

Nathaniel Smith, a Spanish teacher at Columbia High School in Marion County who makes about $35,000 a year, is one of the teachers the Jackson Free Press spoke to Monday. He said he was considering going back to his old job as an assistant manager at Domino's Pizza, where he said he made nearly as much as he does teaching but with less mental stress.

"I've thought about quitting teaching and going back to slinging pizzas," he said. "It's a less stressful environment, I get overtime pay, flexible hours, and I never had to bring it home with me."

Though Smith and other teachers told the Jackson Free Press they deserve more than the $4,000 raise the House passed, that sum could go lower or back to its original $1,000 if the Senate rejects it.

The race for Wooten's old seat was one among three special elections for House seats Tuesday night.

Greenwood lawyer Solomon Osborne, a Democrat, also won a special election for House District 32 in Leflore County Tuesday night with 76 percent of the vote. Democratic Rep. Willie Perkins vacated that seat after he won a chancery judge position in November.

In Lamar County, the race to fill former Republican Rep. Brad Touchstone's House District 101 seat is headed for a runoff after none of the five candidates who ran garnered a majority of the vote. Kevin McCarty led the race with 39 percent, followed by Steven Utroska with 23 percent. Both candidates are Republicans and will go head-to-head in the runoff on Apr. 2.

Touchstone vacated his seat after voters elected him to serve as a judge in Lamar County in November.

With Crudup and Osborne's victories, the House makeup now includes 75 Republicans, 43 Democrats, two independents, and two vacancies. One of those vacancies is the Lamar County race that heads to a runoff in April.

The other is House District 73 in Madison County, where former GOP Rep. Corey Wilson vacated his seat in February. Gov. Phil Bryant has not yet called for a special election to fill that seat.

In 2014, Crudup's father set up a Super PAC to help then-U.S. Sen Thad Cochran win a Republican primary challenge from his right from State Sen. Chris McDaniel, a Tea Party favorite. The PAC raised about $200,000 to run radio ads that questioned McDaniel's views on race and urged Democrats to help Cochran by voting in the Republican primary instead of voting in the Democratic primary. Cochran won after a bruising primary that included everything from Confederate balls, to a break-in at the nursing home where Cochran's wife resided, to a suicide.