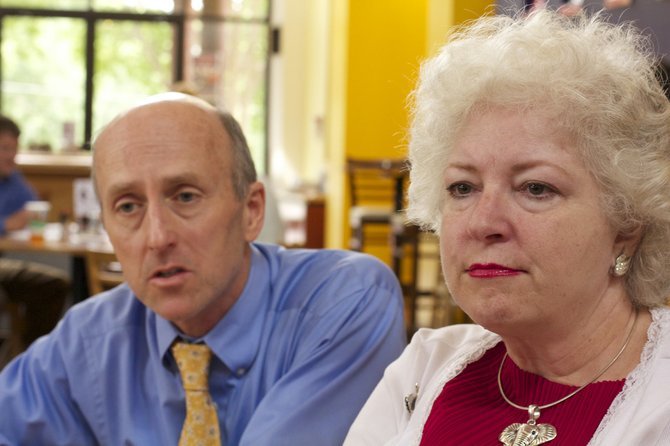 Mark Mayfield appeared in court for his involvement in conservative blogger Clayton Thomas Kelly of Pearl photographing 72-year-old Rose Cochran without permission on Easter Sunday. The photos were later used in an anti-Cochran political video posted briefly online during the Republican primary.

The body of attorney Mark Mayfield was found Friday morning in the garage of his two-story, brick home in a gated community outside Jackson. A gun was found nearby, Ridgeland Police Chief Jimmy Houston said.

Houston says Mayfield had been shot, and a suicide note was found at the scene.

"Everything we see so far, this appears to be a suicide," Houston said.

In a statement, Mississippi Gov. Phil Bryant expressed sympathy to the Mayfield family.

"Deborah and I are saddened to hear of the loss of Mark Mayfield. He was a long-time friend, and he will be missed. Our prayers go out to his family in this tragic moment," wrote Bryant, a Republican.

Mayfield and three other men were arrested last month and face various charges of conspiring to photograph Rose Cochran in the nursing home where she has lived since 2001 with dementia. The Cochran family said she has lost the ability to speak and is receiving hospice care.

During a 2012 interview with the Jackson Free Press, Mayfield had some tough words for Cochran and questioned about whether Congress's core function is to bring federal dollars to their home districts.

"They sure think it is," Mayfield said. "We've got a senator up there right now—Thad Cochran—who's just as guilty as anybody. He's probably the worst one up there in terms of pork-barrel legislation."

Mayfield said he was apolitical for much of his life "until I saw the direction we started taking with the bailouts, the stimulus, TARP, Obamacare—you name it—this endless, mindless overspending and over-borrowing."

All four of the men charged were supporters of state Sen. Chris McDaniel, who lost Tuesday's Republican runoff. Mayfield was a board member of the Central Mississippi Tea Party and had raised money for McDaniel's campaign.

Other suspects are elementary schoolteacher Richard Sager of Laurel and John Mary of Hattiesburg, who took over hosting a conservative talk radio show formerly hosted by McDaniel. McDaniel left the radio job before his election to the Mississippi Senate in 2007.

McDaniel denied any connection to the scheme.

Janis Lane, president of the board of the Central Mississippi Tea Party, said she had not seen Mayfield since he was charged in the nursing home photo plot, but had been in contact with him by phone and through text messages. She said Mayfield's integrity was important to him, and he sounded like he was feeling pressured by the investigation.

"It was truly a challenging time for him," Lane said, wiping away tears.

Lane spoke Friday at the Hinds County Courthouse, where she and other McDaniel supporters were examining poll books to look for examples of crossover voting—people who had voted in the June 3 Democratic primary and in Tuesday's Republican runoff between McDaniel and Cochran.

"He was the finest man," Lane said. "He was an attorney of impeccable character."