PAC Trouble on the ‘Horizon’? 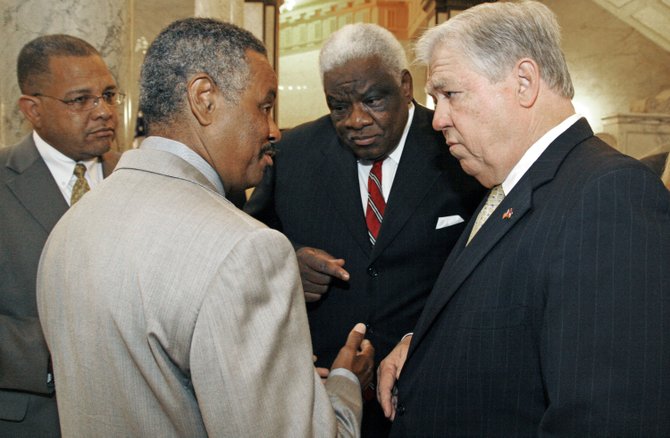 As it turns out, the most influential figure in the never-ending Mississippi U.S. Senate contest might not be either of the Republican primary candidates, state Sen. Chris McDaniel or U.S. Sen. Thad Cochran. Rather, a prominent local African American pastor seems to have wielded power to influence the outcome of the race with the help of an arcane set of campaign-finance regulations that few people involved in the race appears to be paying attention to anyway.

Now, the cloud of mystery that continues to hang over a super PAC founded by New Horizon Church International's Bishop Ronnie Crudup has sent Mississippi politics and its followers deeper into a tizzy.

By Crudup's admission, All Citizens for Mississippi—which the Federal Election Commission defines as an expenditure-only committee, or "super PAC"—raised $200,000 to pay for racially charged radio and print news advertisements against Cochran's opponent, Sen. Chris McDaniel, but at press time, the group had failed to disclose its fundraising and spending activities as federal election rules require by July 15.

On a recent visit to 1750 Ellis Ave., a strip mall New Horizon shares with several other businesses including Sam's Place (Suite 100), Net Counseling (Suite 150), NHCI Administrative Office (Suite 200), and Mississippi Faith Based Coalition (Suite 205), a Jackson Free Press reporter, found a white sheet of printer paper taped on a door in the complex, reading, "ALL CITIZENS FOR MISSISSIPPI SUITE 600." New Horizon's name and logo span across the front of the building strip.

Bishop Crudup, who has a long history of playing both sides of the political fence in Mississippi, has not responded to numerous phone messages left at his church office. In addition to leading New Horizon, Crudup is the president of the powerful but secretive Jackson Redevelopment Authority and a principal in other businesses that specialize in community development.

But Crudup's position as the head of a church, which receives tax-exempt status from the federal government as long as they remain neutral in electoral politics, could represent a legal quandary. Paul S. Ryan, senior counsel with the Washington, D.C.-based Campaign Legal Center, said the law prohibits tax-exempt organizations like churches to intervene in political elections.

"By and large (federal tax-exempt) organizations are not allowed to be involved in super PACs," Ryan said.

Individuals, like Bishop Crudup, can participate in super PACs as long as they do not use resources from churches and nonprofits. The fact that All Citizens for Mississippi and New Horizon share an address "may very well constitute use of church resources," depending on how the space is used, Ryan said.

Crudup told The Clarion-Ledger's Jimmie Gates last week that he raised close to $200,000, which was spent mostly on campaign ads for the Senate race run-off, and the super PAC and his church are separate entities. The church's chief financial officer Jacqueline Vann is also listed as the super PAC's treasurer and signed the PAC's advertising checks. She also lists a New Horizon email address on the group's FEC statement of organization.

The bishop's involvement with the race, which started shortly after the June 3 primary, came into focus in recently, most notably with an appearance by Rick Shaftan, a pollster and political consultant, on American Family Radio's talk show Focal Point with Bryan Fischer. During the show, Shaftan said the National Republican Senatorial Committee paid for the ads that All Citizens for Mississippi placed in media outlets around Jackson.

During an inspection of FEC, as well as and Federal Communications Commission information filed with WLBT-TV and Triton Broadcasting radio stations, the JFP found no records from the NRSC or the media buyer it disclosed on its FEC forms.

Those documents do show that Crudup's super PAC—All Citizens for Mississippi—bought radio advertisements at Jackson stations WKXI, WJMI and WOAD on June 20 to air between June 21 and 24, leading up to the Republican primary runoff.

The ads encouraged black voters to turn out to the polls in support of Sen. Thad Cochran and suggested Sen. Chris McDaniel, if elected, would hurt race relations in Mississippi. All Citizens bought 52 radio spots for each of these stations, which cater to black audiences, totaling $9,825.

The Republican National Committee is under fire for similar allegations regarding its involvement in racially charged advertisements surrounding the Mississippi Senate race. Ed Martin, the GOP chair in Missouri, is apparently concerned that Henry Barbour, nephew of former Governor Haley Barbour, may be behind three radio ads that were reported by three radio ads that were reported by Britain's Daily Mail. One of the ads, paid for by Citizens for Progress, reportedly linked McDaniel to the Ku Klux Klan.

The Daily Mail reported that Mitzi Bickers, an Atlanta pastor, had used this same group name previously. In the current Senate race here, Mississippi Conservatives—a super PAC created by Haley Barbour and run by his nephew, Henry Barbour—paid Bickers for political work. The younger Barbour told the Daily Mail he didn't know about the radio ads, although he acknowledged hiring Bickers to run a robo-call campaign in the Cochran-McDaniel runoff.

The Jackson Free Press reported earlier this year that Bickers also contributed $4,000 to the election campaign of current Jackson Mayor Tony Yarber. She had resigned as a senior aide to Atlanta Mayor Kasim Reed in 2013 after she was accused of filing false financial disclosures about her political projects.

An analysis by The New York Times, released July 10, shows that Cochran won the June 24 election by a total of 7,667 votes, with almost half of them coming from heavily Democratic precincts in Jackson. All Citizens for Mississippi also ran ads in the Jackson Free Press as well as the Mississippi Link, which the family of developer and political power player Socrates Garrett owns.

Sales orders for Cochran's candidate fundraising committee, Citizens for Cochran, were not found in the Triton radio station's political public files. The committee did, however, run ads in The Clarion-Ledger and distribute doorknob hangers in whiter parts of Jackson touting Cochran's 100-plus votes against Obamacare and his support of the National Rifle Association.

Federal law permits super PACs to raise and spend unlimited sums of money, but they cannot give directly to candidates' fundraising committees nor coordinate with campaigns and must report their activities each month or quarter.

For any expenditures over $1,000—such as the thousands the PAC spent on radio advertising—from June 4 though June 23, Crudup's PAC was also required to file 24-hour reports with the FEC so the information is transparent to voters. A search of federal campaign-finance records yields no filings by All Citizens for Mississippi.

The paperwork to set up the PAC, signed by Vann, indicated that it was filled out May 30, 2014, and received and stamped by the FEC on June 6. The Jackson Free Press has filed federal Freedom of Information Act requests with Vann of All Citizens for Mississippi as well as the FEC.