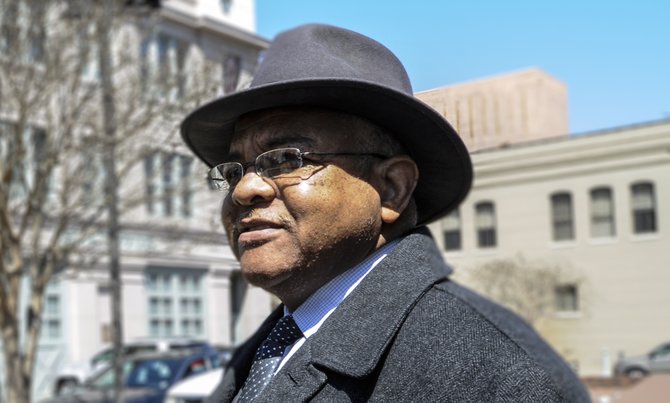 Bishop Ronnie Crudup, who has a long history of working with Republicans—including Gov. Haley Barbour, whom he endorsed in 2007 for re-election—did not deny that his church is a way to get out important messages, including about important elections. Photo by Trip Burns.

Crudup also said that All Citizens did not use church resources to raise funds or use the pulpit to solicit support for Cochran. The JFP reported earlier that the PAC uses the same address as New Horizon both on filings and on advertising checks, and its treasurer is the church's chief financial officer. On the JFP's first visit to the New Horizon complex last week, this reporter found a typed sign on a door in the former strip mall listing the PAC's name.

The Jackson Free Press was one of three newspapers with large black readerships that the PAC advertised with on behalf of Cochran in June.

The bishop, who has a long history of working with Republicans including Gov. Haley Barbour whom he endorsed in 2007 for re-election, did not deny that his church is a way to get out important messages, including about elections. "People utilize the social mediums that they have. In my community, we also have a medium that resides sometimes within church walls. It's another way just like Facebook, Instagram or Twitter. It is a medium to communicate community interest," Crudup said.

Crudup also answered questions Wednesday night regarding discrepancies between the funds that his super PAC reported Tuesday evening with the Federal Election Commission and the statements he made to reporters prior to the filing.

All Citizens for Mississippi raised $144,685 during the time period of the filing, June 6 to June 30—all of which was attributed on the FEC filing to another pro-Thad Cochran super PAC, Mississippi Conservatives. Crudup stood by claims he made previously that he raised approximately $200,000. The reason that less than that is filed with the FEC currently, he said, is because some of the funds he raised were in July, outside the filing time period.

"Some of that did not necessarily have to be disclosed in this particular filing, and so we didn't disclose it," Crudup said. "Some of it will come out in the next filing. There is no intent to deceive, because what is public record will be public record."

Another FEC quarterly report, like the one filed Tuesday, is due Oct. 15.

Mississippi Conservatives only reports paying All Citizens $142,000 with the FEC. That, Crudup said, is because $2,600 was actually raised from another source or sources, and was mistakenly lumped into the amount Mississippi Conservatives gave to his PAC. Crudup said All Citizens will be correcting that record with the FEC by the time the next report is due on Oct. 15.

Crudup would not divulge who any of the other donors were.

"I'll disclose that to them (FEC) when that comes, and they can make it public," Crudup said.

Crudup also said the $33,562.10 listed with the FEC is "cash on hand," saying that the rest of the money All Citizens raised was spent in July, again outside of the filing period. Most of this money—$23,000, he claimed—went to radio ads on stations around the state.

As the Jackson Free Press reported last week, All Citizens placed ads on three Jackson radio stations catering to black audiences. The ads were purchased by a buyer, Jon Ferrell, from the media-buying firm American Media Advocacy Group. Ferrell declined to comment today on transactions he made on behalf of his clients, which include All Citizens and National Republican Senatorial Committee.

Crudup confirmed that the ads were purchased in June before the runoff election between state Sen. Chris McDaniel and U.S. Sen. Cochran, but said that All Citizens did not pay American Media back for placing the ads until July, which is why the expenditures did not appear on the FEC filing, or was reported in the 24-hour reports that are required by federal law for last-minute expenditures before an election.

"They extended some credit to us," Crudup said of American Media.

But according to federal law, money spent for communication that expressly advocates or opposes election candidates is considered an independent expenditure, which is subject to different rules under the FEC. When disseminated 20 days before an election and amounting to more than $1,000, independent expenditures must be filed with the FEC within 24 hours on what is routinely called a "24-hour report."

"Not paying for radio ads is not an excuse. The dissemination date of the radio ads is the date that determines when they need to be reported," Jacob Fenton of The Sunlight Foundation told the Jackson Free Press today.

After the JFP called Crudup back after speaking with Fenton, the bishop said he was calling the FEC to check on the required PAC procedures.

Crudup was quick to offer that he was not approached by Mississippi Conservatives, and he maintains that the super PAC was his own idea after having followed the U.S. Senate race.

"As I watched all of this, I said, 'You know what? I'm involved. I'm going to be involved politically. Why don't I determine my own destiny,' and it was from that the idea came to start my own PAC," Crudup said.

Crudup knows the law, he said, adding that he conducted work with his super PAC not only legally, but ethically. He does acknowledge that "some of it certainly is not the best," when it comes to how political races are conducted, and that election reform may be in the nation's future.

"Until then, we have to compete ... ethically," Crudup said.

Its the same old history of selling out your people for a dollar. Usually a minister being called by a white "Master" type to get his people in line to do what they say. To those of you who say it is the lesser of two evils, I ask you, "HOW's that working for you over the past 600 years????" Don't be stuck on stupid. Certainly GOD doesn't want that for you!!!!!!!!!!!!!!

I've known Bishop Crudup since I was a child. As someone who has seen him minister over the years, he is not about swindling his congregation. This issue is separate from his church. He is a very passionate person, so I hope that that trait is not negatively manipulated in other arenas.

Bishop Crudup is not your typical, uninformed, shouting minister but rather someone that is acutely aware of the circumstances plaguing our community. He has been involved politically for years, and You certainly could not label him as a sell-out. Unfortunately, he did not proceed with caution with this PAC but he, prayerfully, will be able to ride out the storm. He definitely made some mistakes.

What Bishop Crudup is doing is both legal and lawful under both Federal and State laws and regulations. Prayer is a wonderful thing, but sometimes a little money will widen the radio and TV audience for a politician's campaign. His separate PAC serves as a bridge between politicians and the social justice that Bishop Crudup is seeking.