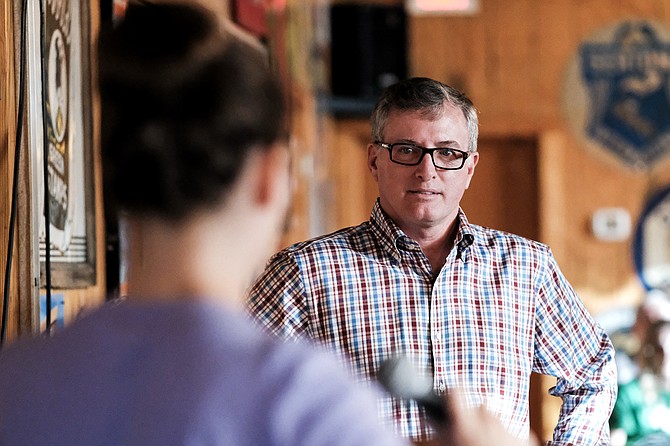 Mississippi state Rep. Jay Hughes, D-Oxford, a 2019 candidate for lieutenant governor, spoke and listened to Lamar County teachers at a town hall event at the Movie Star Restaurant in Hattiesburg on May 13, 2019. Photo by Ashton Pittman.

HATTIESBURG, Miss.—On the penultimate day of Mississippi's 2019 legislative session, state leadership dropped an amended version of an appropriations bill for state construction projects on lawmakers just 23 minutes before asking them to take a vote. State Rep. Jay Hughes' "nerd herd," as he calls his group of aides, immediately went to work searching the bill for references to the Education Scholarship Accounts, or ESA, voucher program to make sure funds had not been slipped in at the last minute. Their searches turned up no results, and nearly every legislator voted for it.

The funds they had searched for, though, were in the bill after all, Hughes told a group of dozens of Lamar County public school teachers at a town hall event in Hattiesburg on Tuesday.

"You have to search as fast as possible, but they literally changed the name and didn't put the code section in," he said.

That, Hughes said, blocked his team from catching the added funds in time for the vote. Republican leadership, including Lt. Gov. Tate Reeves and House Speaker Philip Gunn, had slipped $2 million in for private school vouchers. The slight was even more egregious, Hughes said, because leadership had just told lawmakers they would have to accept a $1,500 teacher pay raise rather than a $4,000 pay raise because there was not enough money.

ESAs are essentially private-school vouchers by another name that allow parents of special-needs children to use appropriated funds to pay for private tuition and education-related services.

"They said there's not another penny left for any state employee to have a raise, not another penny left for any educator to have a raise, and then they give us a bill in the dark of night, 23 minutes before the vote on a multi-million dollar bill, and they literally changed the words so that it wouldn't be picked up in an algorithm," Hughes told the group of teachers on Tuesday, many of whom also expressed frustration with the Legislature.

For around two hours, Hughes and the educators at the event went back and forth, sharing frustrations, struggles and ideas.

'It Is An Exodus'

Kylee Long, a teacher at Oak Grove High School, brought up Mississippi's teacher shortage. In recent years, the state has begun bleeding teachers, districts have struggled to hire new ones, and the ones left have seen class sizes increase.

"A lot are saying they're leaving because they don't feel like they're supported, or they don't have a lot of help in the classroom," Long told Hughes.

She cited family issues, like a lack of affordable daycare options, and proposed giving educators college credits at public universities in Mississippi each year they teach that would either allow them to return for a master's degree or to transfer it to their kids.

"Shortage," Hughes suggested, might not be the best term for what is happening in Mississippi.

"It is an exodus, as much as a shortage," he said. "Teachers are leaving."

Christy Daniels, a Hattiesburg High School teacher, said she has taught at all levels over the past 28 years, including in colleges and prisons.

"I've taught everybody from kindergarteners to convicts," she said.

Several years ago, she said, the U.S. Department of Education asked her to look at a school district in the Delta, which she did not mention by name, and come up with solutions for teacher shortage problems.

"I learned something that really troubled me," she told the crowd. "Forty percent of their teachers are teaching on one-year emergency licenses."

Those state-granted licenses allow, on a temporary basis, educators who have not completed the standard certification requirements to teach in districts where there is a shortage.

"One of the directors of teacher education (in the district) told me that his greatest fear was that the PRAXIS was going to add a writing component," Daniels said, referring to an exam that tests U.S. teachers' academic skills and subject knowledge. "And he told me he was certain that not one future teacher in his program could pass it."

She told that story, she said, to highlight another problem she sees in the response to the shortage: a lowering of teacher standards and quality.

"I think we're taking so many desperate measures to try to get people into the classroom, and that whole initiative of 21-year-olds teaching public school? They're taking them halfway out of college? It's a bad idea," Daniels said. "I don't care that my alma mater started it. It's a bad idea."

She was referring to a collaboration between the University of Southern Mississippi and the Mississippi Gulf Coast Community College that would put teachers as young as 20 years old in elementary and special-education classrooms. The presidents of the institutions jointly announced the program in March.

To do that, high-school students would earn an associate's degree by completing MGCCC's Collegiate Academy during their junior and senior years. Right out of high school, they would be eligible to enter the Southern Miss Teachers College and after two years, earn a teaching degree.

At the program's announcement in March, USM President Rodney Bennett said it would be "rigorous" and produce well-qualified teachers.

"This new pathway will produce more highly qualified teachers or our state by allowing prospective students to complete a rigorous academic curriculum on a more efficient route to earning licensure," he said. "The pathway has three primary components."

For an example of how to draw in teachers, Daniels pointed on Monday to Marks, a Delta town that instituted a residency program for educators. After a resident donated a building downtown, the town made apartments out of it, and offered them to new teachers. Marks pays rent, utilities and cell-phone costs for teachers who move to the district. Hughes concurred, calling the project "amazing."

"We've got to do something in our community to keep us from having to be desperate in teacher openings, because what we need are professionals. ... Broadening the scope and lowering the qualifications is not the answer," she said.

Hughes hammered a similar message of "respect" for teachers throughout the discussion, saying there is "no single panacea" for fixing the state's education woes.

Terri Whitecotten, an Oak Grove High School teacher, suggested that the Legislature could save money to help better fund education by shaving five days off the school year, from 180 days to 175.

"That would be a huge savings with facilities, busses. ... I don't think we're going to drop any further to the bottom if we cut off five days," she said, drawing tittering amusement from her fellow teachers.

She also wanted to know Hughes' thoughts on transparency in the Legislature—especially in light of the $2 million private-vouchers funds legislative leadership snuck into the bill.

"Transparency? There is none. It has left the Capitol building," Hughes said.

"I am not only promising to be transparent if elected, and I will not only have an open-door policy; I will take the door off the hinges," he said.

The voucher funds, he said, came after lobbying from donors. Empower Mississippi, a group that pushes private vouchers in Mississippi, has spent millions lobbying legislators and donating to their political campaigns since 2015.

Tabetha Baker, a special educator at Sumrall Middle School, told the Jackson Free Press on Tuesday that, in addition to her class time, she spends about 15 hours a week filling out paperwork.

"Our schools are doing the best that they can, but if they aren't given the money to begin with what can they do? Absolutely nothing," she said. "Therefore, the special educator exodus will continue if there isn't a change."

After following Hughes on Facebook, she said, she has decided to support him because she feels "he actually values what I do."

"I would not say that I would normally vote Democrat. Actually, the opposite is true," Baker said. "I wish that all legislators would take the time to step into a classroom, proctor a test or be a substitute, so that when they're making decisions, they can be informed decisions. I align with him a lot when it comes to education."

During the town hall, Hughes offered much the same message.

At one point in the town hall, Hughes criticized politicians who focus on "moral issues" that he said will ultimately be decided by the U.S. Supreme Court, not state politicians—a clear reference to issues like abortion, religious liberty and LGBT rights. He called for state leadership to instead focus on bread-and-butter issues like coming up with a plan to solve education issues. That kind of legislation, he said, is in lawmakers' control, and unlikely to be reviewed or struck down by a federal court.

In March, though, Hughes drew fire from many in his own party when he voted for Mississippi's fetal heartbeat bill that Gov. Phil Bryant later signed into law. It bans all abortions after a heartbeat is detectable, which is typically around six weeks of pregnancy. Other state legislatures, like Alabama and Louisiana, have since passed similar laws. Last week, Mississippi state Sen. Joey Fillingane, R-Sumrall, told the Jackson Free Press last week that the bills were, in part, a response to President Trump's appointment of Supreme Court Justice Brett Kavanaugh, and the possibility that the Supreme Court might overturn its 1973 Roe v. Wade ruling that declared abortion a constitional right. Fillingane was a co-sponsor of the law.

In February, Hughes sent messages to several women who criticized his vote, telling them that voting against the bill would imperil the seats of the 10 white Democrats like himself who remained in the House at the time, and that it would fit a Republican narrative "that you can't be white or moderate and be a Democrat in Mississippi."

He was referring to Mississippi Secretary of State Delbert Hosemann, who is running as a Republican for lieutenant governor. In March, Hosemann said he would support a teacher pay raise every year to help alleviate the shortage.