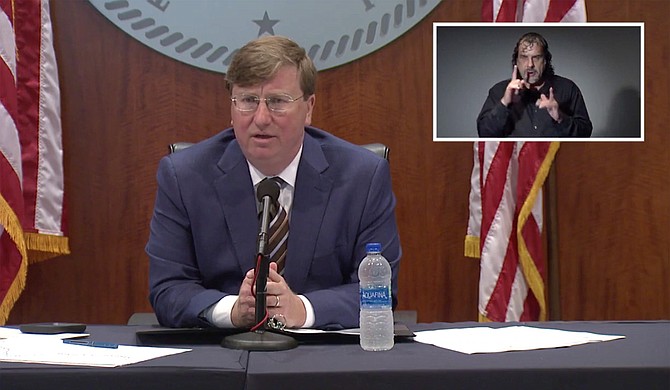 Gov. Tate Reeves allowed Mississippi’s statewide mask mandate to expire yesterday, replacing it with a “Safe Recovery” order that maintains some restrictions on large gatherings and still requires masks in schools. With the statewide mandate gone, only a patchwork of local restrictions are still in effect requiring mask usage in public in Mississippi.

“I still believe that masks work,” Reeves said at Wednesday’s coronavirus press conference. “I still plan to wear one, and I expect that most people in our state will (too). It is the smart, prudent … wise thing to do.”

Reeves credited the mask mandate with effectively shepherding the state through the “worst of the worst times,” when hospitals were overwhelmed in July and August. “But there is a difference between something being wise, and something being a government mandate,” Reeves said.

Asked by WLBT’s C.J. LeMaster if the new order constituted an “honor system” for mask usage, Reeves responded sharply. “We are moving to an executive order wherein I trust the people of Mississippi to do the right thing,” he said. “If you want to call that the honor system, that's fine with me.”

State Health Officer Dr. Thomas Dobbs, also present at the briefing, explicitly avoided answering a question about the wisdom of lifting the statewide mandate. “As far as the balance of liberties and public health, that’s a debate that happens,” Dobbs offered, while circling back to the incredible importance of mask wearing.

“Everyone needs to wear a mask. There’s just no doubt about it,” he said.

No Concern For Elections 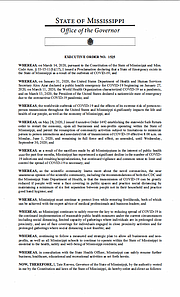 Additionally, businesses dealing in close contact with customers, such as barber shops and salons, continue to operate under mask requirements for all employees. Regular screenings for employees and 75%-capacity limitations are still the norm statewide.

With presidential and congressional elections looming in November, Reeves brushed off concerns that refusing to require masks at the polling station might pose a risk to Mississippians. “We’ve had elections in our state multiple times … over the last six months. To my knowledge we have not had any major challenges,” he said.

After reporters reminded him that many of those elections had, in fact, taken place during the mask mandate, Reeves demurred, suggesting that additional requirements for Election Day may still be forthcoming.

Mississippi's lack of a mask mandate on election day is thrown into sharp relief by the state's extremely strict absentee voting requirements. “Having a preexisting condition that puts a voter at a higher risk does not automatically create a temporary disability for absentee-voting purposes,” concluded the Mississippi Supreme Court in late September. Voters under doctor-imposed quarantine for COVID-19, as well as those caring for a COVID-19-infected dependent, qualify for absentee ballots, as well as voters over the age of 65.

The governor also expressed soaring confidence in a vaccine for COVID-19 being available before the end of the year—or potentially before the election in November. “I think we will have a reliable vaccine sooner rather than later,” he said. “I would expect that to occur, sometime in the next 30 to 60 days, that at least initial doses will be available on a priority basis.”

Experts disagree. In a mid-September interview, Dr. Bhagyashri Navalkele, medical director of infection prevention and control at the University of Mississippi Medical Center, warned the Jackson Free Press that a safe vaccine would likely not be available until sometime next year. She cautioned against any usage of a fast-tracked vaccine without a full measure of safety and efficacy trials.

The peak of the COVID-19 pandemic in Mississippi struck hard and fast. In late June, Dobbs warned the Jackson Free Press that he anticipated overwhelmed hospitals by fall, but the virus filled the state’s hospitals to capacity within a matter of weeks.

Dobbs answered indirectly when asked if the State’s response could match the potential speed of a sudden resurgence in the virus. “We’re looking retrospectively to see what early indicators we can find. And we do think we’ve seen some,” the state health officer told the Jackson Free Press. “On the hospital side, hospitals are pretty full, but it’s non-COVID stuff, and that’s something we’ll have to be very conscientious of.”

Reeves, answering the same question immediately before, had a more laconic response. “Yes,” he said. Pressed later on Dobbs’ warning of lower capacity in the state’s hospital system, he offered a different take. “I can’t agree with your certainty that seasonal illnesses will necessarily lead to a constrained … healthcare system.” Reeves suggested to the Jackson Free Press that social-distancing precautions would possibly lead to a much milder flu season.

“I believe we can very quickly adapt our strategy,” Reeves said, based on the months of experience the state has with the pandemic. Today, the day after the state’s mask mandate officially ended, the Mississippi State Department of Health announced 696 new cases of COVID-19 and 10 additional deaths—with an average degree of spread in line with cases just prior to the state’s summer peak.