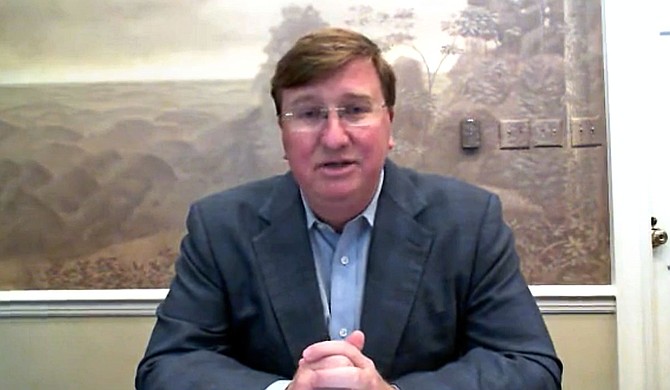 Gov. Tate Reeves signaled today that he would refuse to participate in a nationwide lockdown if the incoming Joe Biden administration called for such a measure, promising instead defiance and a repeat of late 2020’s approach to containment of the virus. Photo courtesy Tate Reeves

On an afternoon Facebook livestream, Gov. Tate Reeves preemptively addressed the prospect of a nationwide lockdown under the incoming Joe Biden administration, rejecting even the possibility of shutting down the state in the face of a national surge in COVID-19 cases, and promising defiance if such a policy manifested.

“This notion (of lockdowns) … is totally and completely beyond reasonableness,” Reeves said, adding that the emergency powers in the Stafford Act grants must be “state-managed, locally enforced and federally supported.”

The governor signaled willingness to fight any attempts to impose national emergency restrictions on the state. “I don’t believe that there’s any constitutional or statutory authority for any president to shut down Mississippi’s economy. We will certainly fight that, if it becomes necessary,” he said.

Although the lockdown proposal is not a plank in Biden’s stated coronavirus platform, Gov. Reeves rushed to shoot the idea down after one of President-elect Joe Biden’s COVID-19 advisers, Dr. Michael Osterholm, suggested to Yahoo Finance that the federal government could authorize a stimulus package intended to support workers, businesses and municipalities in support of a nationwide lockdown to crush the spread of COVID-19.

Reeves delivered his comments on a livestream from quarantine, after his daughter tested positive for COVID-19 on Tuesday. The governor said that the rest of his family, including himself, have repeatedly tested negative.

Recently, the governor has had his own troubles with enforcement of executive orders. DeSoto County Sheriff Bill Rasco stated that he would not enforce the mask order for DeSoto County.

A spokesperson for the law enforcement agency told WMC News that “we have not issued any citations. We will not issue citations for not wearing masks nor will we enforce Governor Tate Reeves' mandate on social distancing.”

“Desoto County has been consistently among the hardest hit,” Reeves responded, asserting that he expected “local leaders from across the state to step up and take this virus seriously.”

As the Mississippi Free Press reported on Nov. 12, DeSoto is indeed one of the hardest hit counties in the state of Mississippi, with "about one in every 205 DeSoto County residents (testing) positive for COVID-19" in the latter half of October.

State Health Officer Dr. Thomas Dobbs warned that DeSoto County was "on fire with cases," adding that "If I lived in DeSoto County I wouldn't go out."

As the U.S. prepares for a transition to a new year and presidential administration, Reeves remains firm that Mississippi will repeat the tactics of late 2020 as the new year dawns. “We as a state are going to continue with our strategy. … We’re not going to shut down businesses. We’re not going to have long-term mandates with no end in sight,” Reeves said.