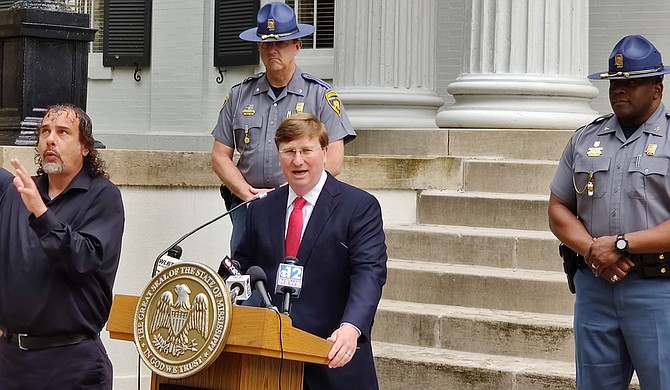 Gov. Tate Reeves will not be recommending a statewide lockdown until more information on the spread of COVID-19 is available. Reeves will sign additional executive orders to limit mass gatherings later today. Photo by Nick Judin

JACKSON, Miss.—Gov. Tate Reeves again rejected calls for a statewide lockdown at a press conference outside the governor’s mansion today in downtown Jackson, saying that “no expert had yet recommended” such an enforced quarantine. But he pledged to sign expanded executive orders he believes will help clamp down on the mass gatherings happening at weddings, funerals, Mississippi’s restaurants and beaches in defiance of previous recommendations from the Centers for Disease Control and the Mississippi State Department of Health late Friday.

Reeves repeatedly refused to clarify if the executive orders would be formal bans on gatherings, carrying penalty of enforcement, instructing the press to wait for him to sign the orders later in the day. MSDH updated the totals of COVID-19 cases with numbers from last evening at 6 p.m., adding 71 new cases across the state—the most in one day, yet—for a total of 320. That is a 300% rise in cases MSDH has reported since 80 on Friday.

Hinds, DeSoto and Harrison counties still lead the number of State-reported COVID-19 cases, with 31, 29 and 24 cases, respectively. Madison County is now tied with Forrest County, the first county with confirmed cases, with 14 each. Rankin and Pearl River counties are tied with 13. Both Madison and Rankin counties, suburbs in the populous Jackson metropolitan area, drew weekend criticism for restaurants open for sit-down dining and crowded retail outlets and flea markets, among other hazards.

CDC data from the first weeks of the novel coronavirus’ spread across the U.S. suggests between 5% and 11% of cases across all demographics require intensive-care facilities. Reeves estimated that 900 ICU beds are currently available across Mississippi out of 2,700 total. The governor explained that many options were in the works to expand that second number by 50% to 100%, including retrofitting post-anesthesia care unit beds, restricting non-essential surgeries, reclaiming nonessential rooms and equipment, and possibly having the Mississippi Army National Guard set up field installations for triage and treatment.

The Jackson Free Press asked Reeves and Dobbs precisely what number of cases would constitute the overwhelming of the state’s health-care system. Both declined to provide a specific number.

"We are nowhere near a situation such as that in Mississippi," Reeves said. Dobbs stressed that Mississippi hospitals are considering all options available to expand access to ICU facilities, and explained that properly trained medical professionals were the greatest bottleneck.

Dobbs admitted that he was unaware of a single COVID-19 test performed on an inmate in the Mississippi Department of Corrections system. No additional information was presented on MDOC plans to begin screening for the presence of the virus in the state’s beleaguered prisons and jails.

In response to a question about the state’s lone abortion facility, Reeves confirmed that he viewed abortion as an “elective” surgery and expected the Jackson Women’s Health Organization to shut down and remain closed during the crisis. But while the governor has yet to issue mandatory closures for most nonessential businesses, he went a step further for the Fondren clinic.

“Whatever additional action needed to protect the lives of unborn children and those infected with COVID-19, the State will take,” Reeves said. When asked if that included forcibly shutting the clinic down, Reeves repeated himself.