Hinds, D.A. Evaluating Release of Some Pretrial Detainees Due to COVID-19 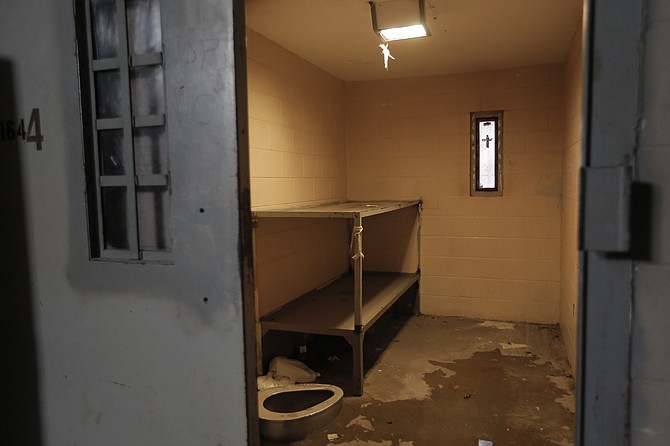 As the COVID-19 pandemic continues to ravage the country and globe, advocates warn of the unique health risks the easily contracted virus poses for the 19,000 people serving sentences inside Mississippi state prisons and the more than 5,200 people locked up and awaiting trial in county jails.

"The thousands of Mississippians locked up in our local jails find themselves sharing common areas, bunk beds, toilets, sinks, and showers with dozens of different people each day," said Cliff Johnson, director of the Roderick and Solange MacArthur Justice Center at the University of Mississippi School of Law, in a press release today. "Mississippi sheriffs will be the first to tell you that they do not have the expertise or resources to deal with a pandemic like COVID-19."

"Our county jails have few, if any, full-time licensed medical providers, no proper isolation rooms, and woefully inadequate equipment and training specific to deal with infectious diseases," Johnson warned.

MacArthur Justice Center collected data showing that roughly 2,500 people have been in Mississippi's jails for more than 90 days, and more than 575 have been locked up awaiting trial for more than a year.

At a press briefing today, health-care professionals from the University of Mississippi Medical Center stated that community spread of COVID-19 has begun in the greater Jackson area and throughout Mississippi. They warned that a "tidal wave of cases" would soon hit Mississippi hospitals.

By press time, Mayor Chokwe A. Lumumba issued an executive order prohibiting gatherings of 10 or more people. Those who violate the ban will be charged with misdemeanors.

In addition to the adult population, Jones confirmed that 15 minors who are being charged as adults are held at the Henley-Young Juvenile Justice Center in Jackson.

When asked, the sheriff's office did not provide the Jackson Free Press with the names, ages, time of booking and duration of incarceration, or other demographic data regarding those who are locked up in Hinds County jails.

The last publicly available Hinds County jail rosters from December 2019 show that some inmates have been awaiting trial since 2016, though the Jackson Free Press is unable to confirm if those same people are still held at county jails at press time.

Jones told the Jackson Free Press that the county is taking several precautionary measures to ensure the safety of staff and inmates during the COVID-19 outbreak. These include ensuring that all staff comply with Centers for Disease Control guidelines for cleanliness and hygiene inside of facilities, including disinfecting facilities and equipment; screening people for symptoms before they are booked into jails; screening inmates for symptoms, and referring them to off-site testing and treatment if they do exhibit symptoms associated with COVID-19.

Jails were operating with existing staff and no additional staff or people from other agencies, including the state health department, have been deployed to the facilities to support them in managing the spread of the virus, Jones said. He explained that while county jails have medical personnel, no doctors are on-site inside the jails, and inmates who fall ill or exhibit symptoms are transported to the nearest hospital for medical care and testing.

All visits to the jail, except attorney-client visits, are also suspended, though the Hinds County Detention Center had banned in-person, contact visits from family well before the COVID-19 outbreak. Though the Mississippi Supreme Court is allowing video bail hearings amid the COVID-19 crisis, the emergency order requires defense attorneys to be physically present with their client. Mississippi State Public Defender André DeGruy is urging the Mississippi Supreme Court to suspend that requirement.

In an email to Judge James W. Kitchens on March 17, DeGruy wrote: “Our request is simple, to minimize the number of people who enter detention facilities, the requirement in MRCrP Rule 1.8 that ‘defense counsel be present at the location with the defendant during the proceedings’ be temporarily suspended. This would allow local stakeholders to develop procedures based on available technology to ensure that people have access to the courts at this critical time while minimizing the risk of bringing this potentially deadly virus into one of our detention centers.”

Families who wished to interact with loved ones had the option of video conferencing with them from inside the jail, but that is no longer an option to prevent infected people from coming inside the facilities. Inmates can still call their families by telephone, Jones confirmed.

No Hinds County inmates had reported symptoms or been tested or moved from the facilities as of March 17. On March 18, Jones confirmed that the county was not "medically screening employees before going into the (facilities)."

"No ma'am, we are not doing that," Jones added.

"No we are not (screening staff) unless they're showing any type of symptoms," Jones explained, such as a fever or cough.

"Of course we are concerned," Jones added, referring to the well-being of guards and other staff who move in and out of jails.

A number of factors contribute to overcrowding and prolonged pretrial incarceration inside Mississippi's jails, including the bail system, backlog in the court system, excessive delays from the moment of arrest to disposition, an underfunded public-defender system and the fact that Mississippi elects judges—causing some to adopt a tough-on-crime persona to satisfy constituents—among other systemic problems.

In 2015, the U.S. Department of Justice placed the Hinds County Detention Center under a federal consent decree, due to prolonged pretrial incarceration and other issues there, and mandated the facility to improve. As of last December, the jail is still not federally compliant, because of ongoing staffing shortages and facility problems.

In the MacArthur Justice Center's statement today, DeGruy highlighted the issue of bail and the crisis in the public-defender system as contributors to the state's high incarceration rates. Mississippi currently has the second highest in the country, surpassing Oklahoma after that state implemented reforms, including re-classifying simple drug offenses to misdemeanors, that led to a drop in the prison population.

"The determination of whether to require a person to post a monetary bond for their release is very serious, and judges are supposed to consider evidence and analyze more than a dozen different factors in making that decision," DeGruy said.

"Despite the gravity of this process and the fact that imposing bail can result in poor Mississippians being locked up for two years or more before finally getting their day in court, defense counsel is almost never present during these hearings," he continued. DeGruy added that "this reality of our broken public defender system creates a class-based system in which poor people languish in jail awaiting trial while people with money are out within 48 hours of being arrested."

Mississippi currently does not impose a limit on how long a person can be incarcerated pretrial, DeGruy confirmed, though Mississippi Code does include a constitutional right to a speedy trial clause.

"As of right now, there are no plans to release any of them," Jones said of the county jail population on March 17.

Today, Jones clarified that decisions to release inmates were not legally under the purview of the sheriff's office. "We don't have the authority to release anybody," he said.

In a phone call this morning, Hinds County District Attorney Jody Owens, who ran last year to be a "decarceral" prosecutor, confirmed that his office and other county officials had been working since last weekend to assess which inmates may be eligible for release amid COVID-19 concerns.

"What we're doing is focusing on the hundreds of individuals who are currently being held in Hinds County jails and determining the best way to reduce that population," Owens said.

"We've been examining all the individuals who are in custody to determine what individuals can be released on other, less restrictive means," Owens added, pointing to ankle-bracelet monitoring, release on one's own recognizance and reduced bond as examples of the different kinds of conditions his office is exploring.

To date, Owens said that he and his team had identified approximately 25 people who may be eligible for some kind of release. He explained that his office was only able to initiate the process of recommending certain inmates for release after the county declared a state of emergency.

Such decisions amount to a balancing act, Owens emphasized. Though the district attorney said he and his colleagues are working to ensure that people are not placed in unnecessary risk and that the county honors the constitutional rights of detainees, the county is also responsible for ensuring the public safety of residents and victims.

"These people are constitutionally under the care of the county. So we have an obligation," Owens said. His office, Owens said, was taking extreme care to ensure public safety by assessing "(who) are the individuals and what do they need, and frankly what they're entitled to, really."

Some police departments around the country are revisiting their arrest procedures amid the pandemic. The Philadelphia (Pa.) Police Department is delaying arrests and releasing people charged with certain non-violent offenses, including prostitution, car theft and narcotics possession and bench warrants, in order to mitigate the spread of the virus now.

In today's announcement, Cliff Johnson urged police in Mississippi to stop arresting people for low-level, misdemeanor and non-violent offenses in order to manage the spread of infection in jails.

By press time, the Jackson Free Press was unable to reach the Jackson Police Department to inquire about modifications to its own policing strategy amid the virus outbreak, but Owens said he thought that the JPD was taking COVID-19 risks into consideration.

"From a law enforcement perspective ... social distancing is challenging," Owens added, "because we still have people committing crimes."

The JPD will hold a press conference tomorrow at 11:00am about "recent drug arrests," though the department did not offer additional details in its email announcement of the presser to the media today.

"(The) virus isn't stopping people from committing crimes," Owens said, adding that in the last 48 hours, the county had still seen aggravated assaults and incidents of gun violence.