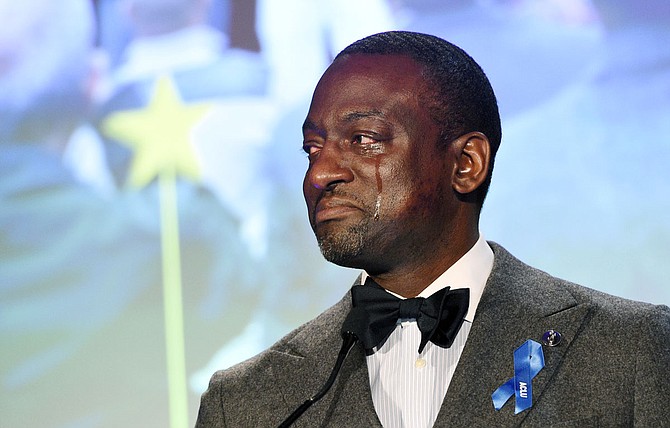 Dr. Yusef Salaam, who was wrongfully incarcerated in 1990 after being falsely accused with four other young men for the rape of a woman jogging in New York’s Central Park, implored elected Mississippi officials and law enforcement to do more to combat the spread of COVID-19 in America’s prisons and jails. Photo by Chris Pizzello/Invision/AP

One of Dr. Yusef Salaam’s most vivid memories of being falsely incarcerated in 1990 for the rape of Trisha Meili, a jogger in New York’s Central Park, is when an elder in prison told him, “If you ever get sick, eat an onion.”

In prison is where Salaam learned about other homeopathic remedies for supporting a healthy immune system, such as eating cloves of garlic, as a way of staving off infectious diseases than can spread virally among the incarcerated.

Living under such unusual, high-pressure circumstances and without access to adequate health care or nutrition, Salaam told the Jackson Free Press on March 20, has forced the nation’s prisoners to cultivate a kind of secret knowledge that others on the outside might not possess.

“One of the things that I think is a saving grace for the inmate population is that we’ve been able to do things that are very unconventional,” Salaam said.

For Salaam, exonerated in 2002, this quality represents a harbinger of resilience and hope for the country’s incarcerated population, who are left fending for themselves as COVID-19 threatens to infect overcrowded jails and prisons, while those in power are not doing enough to stop the spread of the virus among some of the most vulnerable populations.

Salaam, who was wrongfully convicted and sentenced to prison at age 15 along with four other innocent underage boys in New York City, has been working as a prison-reform advocate since his exoneration. During a phone interview from his Georgia home, he urged elected officials and law enforcement to do more to prevent the rapid spread of novel coronavirus.

COVID-19 has already infected police departments from San Francisco to Chicago and Memphis—killing one officer in Detroit—and continues to devastate the 9,000 people inside New York City’s Rikers Island jail after an infected corrections officer brought the disease into the facility. Convicted rapist Harvey Weinstein even contracted the virus in Rikers.

Prisoner advocates describe the situation as a ticking time bomb in Mississippi, where 19,000 people are serving sentences behind state prison bars and 5,200 people languish for months or years in county jails, waiting for their day in court. In addition to advocating for inmate release—particularly those at highest risk for suffering complications from the disease, including elderly and sick inmates—civil-rights organizations are urging law enforcement to implement preventative measures on the front end, like no longer arresting people for low-level offenses, to prevent the infection from entering jails.

“The thousands of Mississippians locked up in our local jails find themselves sharing common areas, bunk beds, toilets, sinks, and showers with dozens of different people each day,” said Cliff Johnson, director of the Roderick and Solange MacArthur Justice Center at the University of Mississippi School of Law, in a March 18 statement he emailed to journalists:

“Mississippi sheriffs will be the first to tell you that they do not have the expertise or resources to deal with a pandemic like COVID-19. Our county jails have few, if any, full-time licensed medical providers, no proper isolation rooms, and woefully inadequate equipment and training specific to dealing with infectious diseases.”

“This is one of the worst nightmares that anyone could ever imagine,” Salaam said, describing the threat of COVID-19 infection in U.S. jails and prisons, including in Mississippi. “If someone (in) the prison in their unit gets sick, the likelihood that all people in that unit will get sick is there and is real. This is a tragedy.”

“I think the prison industrial complex is considered at this point probably a petri dish,” Salaam added during the interview.

Because police officers are in regular and frequent contact with people in the communities they serve, they are at particular high risk for becoming infected and spreading COVID-19 to others.

The Memphis Police Department is instructing officers to write citations for misdemeanors instead of arresting people.

The Jackson Police Department confirmed March 27 that one of its officers had tested positive for COVID-19. The week before, the JPD had told the Jackson Free Press that it would not make changes to its policing protocols, despite the acute public-health risks that novel coronavirus poses to the criminal-justice system.

In a March 19 phone interview following a JPD press conference announcing two recent drug-trafficking arrests, JPD Officer Sam Brown said that the only change was that the department was supplying its officers and precincts with sanitary supplies in line with Centers for Disease Control recommendations. These include masks, gloves, hand sanitizers and other disinfectants, which officers are trained in how to use, Brown explained then.

On March 27, however, and after the COVID-19 case, Brown confirmed JPD is now arresting people for misdemeanor charges and then releasing them.

From March 28 forward, the JPD will enforce Mayor Chokwe A. Lumumba’s executive order banning gatherings of 10 or more people. Brown said violations will result in the arrest, misdemeanor charge and release of violators.

On March 20, Hinds County District Attorney Jody Owens said that his office was identifying and recommending conditional release for some pretrial detainees in the county jail. But it’s a balancing act, he said. File Photo by Seyma Bayram

Hinds County District Attorney Jody Owens, who was elected last fall on a decarceral platform, told the JFP on March 20 that his office was working to identify and recommend certain pretrial detainees for release on either reduced bond, electronic monitoring, release on one’s own recognizance, among other conditions. He emphasized that the county must balance the constitutional rights of detainees with its responsibility of ensuring the public safety of residents and victims.

Recent jail-count data indicate a drop in the Hinds County jail population of unconvicted people waiting for trial. Whereas the inmate population has tended to hover between 470 to 500 in recent months, it saw a decline after March 12.

Local police departments are still arresting and booking people for low-level or non-violent crimes, however, including simple drug possession charges and failures to appear for court dates.

On March 22, law enforcement arrested Christopher Brown, 29, for possession of a controlled substance and Dushun King, 41, for possession of a controlled substance and violating a traffic ordinance; both were released from jail on or before March 25. On March 24, the Clinton Police Department arrested and jailed Eric Dawson, 43, for a bad check. Since March 21, the Mississippi Department of Corrections has arrested and sent three people to Hinds County jails on probation-violation charges.

The Jackson Free Press asked Salaam how to address some residents’ concerns that crimes may go up if people are released from mail.

“I’m actually more concerned with the causes of those crimes, meaning what causes people to respond the way that they respond,” Salaam said.

Salaam pointed to markers of systemic oppression, from the legacy of redlining to poverty, which can drive people to resort to illicit or risky actions to survive.

Mississippi, which currently and consistently ranks as or near to being the poorest state in the nation, also has the second highest incarceration rate. It recently surpassed Oklahoma’s incarceration rates after that state implemented reforms last year, including reclassifying simple drug-possession charges to misdemeanors, which resulted in a drop in the prison population.

“If we really want meaningful change, we have to really talk about the real issues and not some of the outskirts or outgrowths that have come about because of those issues,” Salaam said. He pointed to law enforcement’s treatment of the opioid epidemic, which has drawn more attention for affecting poor and middle-class whites, as a public-health issue rather than a criminal issue as another example of how implicit bias manifests itself in whom law enforcement prosecute and why.

DeGruy stressed the urgency of acting before COVID-19 spread.

“If we’re moving people who are getting sick out of jails into hospitals, that I think, for the whole state, is worse than before they get sick,” he said.

In a “frequently asked questions” page on the MDOC website, the agency states that it is taking temperatures of correctional staff, installing more hand sanitizers, allowing inmates to use the “sick call system” to report symptoms and access medical care, temporary family visit suspensions, and not accepting new inmates into MDOC facilities with “limited exceptions.”

It is unclear whether or not any MDOC guards have stopped working over COVID-19 concerns or whether any guards or inmates have tested positive since MDOC made the FAQ sheet available to the JFP on March 18.

Dr. Salaam called on elected officials to exercise political courage and implement novel strategies to mitigate the risk of COVID-19 in America’s prisons and jails.

“And hopefully this informs us as we move forward also on what we need to have in place, just in case, so when the next outbreak happens, when the next virus happens, how do we respond, and how prepared are we in the future for something like that,” he said.

‘We Can Become Better’

Yusef Salaam said that the events of the last two weeks have shown America a very small taste of what the nation’s 2.3 million incarcerated people, who live in fear and in confinement for months or years, have endured daily.

He added that he was particularly concerned about the impact that suspension of visits with family are having on incarcerated people who rely on crucial familial and community support to survive harsh prison and jail terms.

Lack of urgency on the part of the criminal-justice system to curb the spread of COVID-19 sends a harmful message to the millions of incarcerated men and women who can do nothing but shelter in place, as they already do, while the likelihood of contracting the disease increases.

“It feels like when we, as people who were in prison, felt and knew that we were not seen as full human beings, full citizens. It feels like that all over again,” Salaam said. “I can’t turn away from that, I can’t turn a blind eye to that, because I was once part of that population.”

“We far too often and far too long have been living in a society where we’ve been locking people up and throwing away the key and forgetting about them. These are still human beings,” he added.

“We can become better as a result of this. We don’t have to still be the worst of us, we can become the best of us,” Salaam implored to leaders.