City Leaders at a Loss over Water, Sewer Revenue Loss 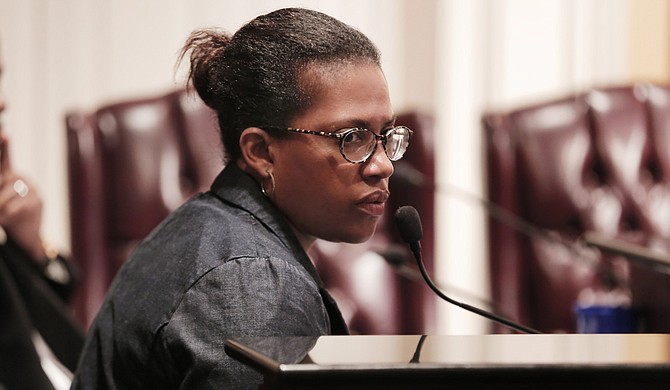 Public Works Director Kishia Powell asserts that the City’s issues with water and sewer revenue stem from a combination of ambitious projections from engineers and difficulties with the new meter and billing system, both a result of the Siemens contract. Photo by Imani Khayyam.

JACKSON — The water- and sewer-revenue deficit has a few possible sources, but even Jackson City Council members are having a difficult time parsing out the how and why.

"It's difficult to separate the signal from the noise with water, sewer revenue," Council President Melvin Priester, Jr. said during a phone interview on April 25. Priester pointed back to a 2013 Neel-Schaffer report during the hearings for the $90-million bond the City issued for the Siemens contract.

Public Works Director Kishia Powell also brought up the same report during a April 18 meeting of the Budget Committee of the City Council, stating that a Neel-Schaffer's revenue projection in its Performance Contract Savings report shot too high for the City's current revenue intake to meet.

Most of the savings, the report states, would come from a more accurate meter read, saving the City money by ensuring that customers pay for all the water used.

"It caught up to and severely impacted revenues," Powell said during the April 18 meeting about the loss of the projected savings Siemens predicted as a result of more accurate meter-reads.

However, Priester questions the difference between the Neel-Schaffer and the Siemens projected rate increases and the rates charged to customers since fall 2013. In the 2013 engineer's report, it states that to keep up with the demands of the debt incurred in the historic $90-million bond, the City would have to raise the rates to an estimated $2.58 per CCF, 100 cubic feet or 748.5 gallons of water and up to $2.21 for the same amount of sewage by September 2015. It estimated in 2013 that by September 2016 the rates would go up again to $2.70 CCF for water and $2.35 CCF for sewage.

So where did the difference go? No one seems to know.

The City Council is also concerned about the prevalence of straight-pipe theft, when someone circumvents a meter to use water without paying for it. The name comes from installing a pipe from the distribution system to the house or business.

Ward 1 Councilman Ashby Foote said by his calculations that it was costing the city "anywhere from a million to a half a million" a month "just because we weren't enforcing the rules as it applies to straight-piping." He called this number a "back of the envelope" calculation during the April 18 meeting.

"And if we had that money we wouldn't have this problem," Foote added. "It's not like people in Jackson decided to stop using water."

Powell said it has not been a priority for the City's already overworked Public Works Department and that Jackson is not a unique example of the problem.

"The staff has been investigating and pulling around 350 straight pipes since this summer. This is not the only city that has a water-theft issue," Powell said.

"We have even found locations where we have repeatedly pulled straight pipes. Short of dealing with the police and code services, there is nothing that keeps people that don't want to honestly pay for water from going right back out and removing the meter and installing a straight pipe," Powell said.