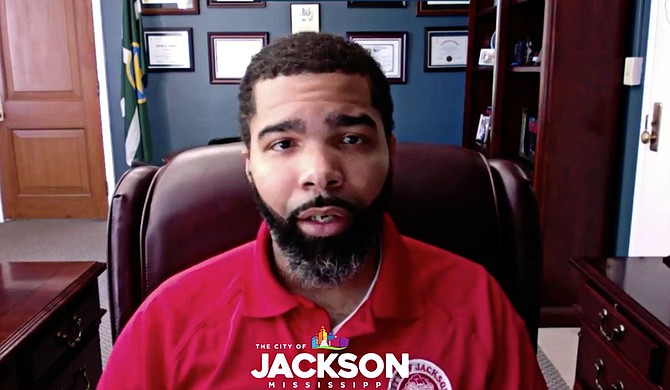 In a video released Friday, Mayor Chokwe Antar Lumumba called for a repeal of Mississippi’s Open Carry Law, citing that the law makes it impossible for police to remove illegal guns from Jackson’s streets and stokes an environment of fear and intimidation. Photo courtesy City of Jackson

(JACKSON, Miss.) – In a video released Friday, Mayor Chokwe Antar Lumumba called for a repeal of Mississippi’s Open Carry Law, citing that the law makes it impossible for police to remove illegal guns from Jackson’s streets and stokes an environment of fear and intimidation.

This comes after two children, an 11-year-old and a five-year-old, were killed due to gun violence within the span of one week.

In an effort to lessen the occurrence of violent crime in the City of Jackson during the COVID-19 public health crisis, Mayor Lumumba has signed an executive order to temporarily ban open carry in the city.

Mayor Lumumba has also called on the support of state and local leaders and all for citizens to sign this petition.

“For too long, gun violence has plagued our city and disproportionately affected Black and

In the space of just one week – two innocent children lost their lives due to senseless gun violence.

Many of these killings could have been avoided if we had state law that enabled us to better control the presence of firearms on our streets.

As a city, we have championed progressive programs toward lessening the occurrence of violent crime here in Jackson with our violence interruption and credible messenger programs- to find better solutions to interpersonal conflict before they turn deadly– but these measures alone will not stop the gun crime that we have become all too accustomed to experiencing.

The City of Jackson faces a significant challenge with illegal guns.

The Open Carry Law interferes with law enforcement’s ability to take illegal guns off of the streets.

Prior to Open Carry, when Jackson police officers saw a gun in plain view, it gave them probable cause to seize the weapon and determine whether or not it was an illegal gun.

The open carry law not only provides protection for individuals who are armed with illegal weapons; it also creates an atmosphere of fear and intimidation in the community.

We cannot continue to turn a blind eye to the fact that the Open Carry Law has led to an increase in gun violence in our communities.

Since 2013, child deaths by firearms in the South have increased 72%, according to the National Center for Health Statistics.

Sending our thoughts and prayers to the families who have lost loved ones to senseless gun violence is not enough.

If we are sincere in our hope for better outcomes and a brighter future for our youth, we must be moved to action. It is this call to action that has led to my decision to issue an Executive Order suspending Open Carry law during the COVID-19 civil emergency. Under State Statute 45-17-7(e), I am given the discretion in the interest of public safety and welfare to issue such orders that are necessary for the protection of life and property.

In this moment of great distress and economic tension it is important that we eliminate the ability for illegal weapons to inflict irreparable harm on our City. I want to make it clear that I have no principal disagreement with the Second Amendment right to bear arms, but all rights must be balanced by reasonable regulations. A right that protects illegal guns and puts more people in fear, a right that escalates conflict beyond a point of resolution, and a right that interferes with another person’s right to live is not a legitimate right to be maintained.

Your right to swing ends at my nose.

While this order will only be in effect for a short period of time, I am calling on all Jackson residents, and all state and local leaders to act in the interest of our innocent children. Repeal the Open Carry law which makes it impossible for law enforcement to root out illegal firearms on our streets.

How many babies do we have to bury to appease someone’s desire to open carry?”