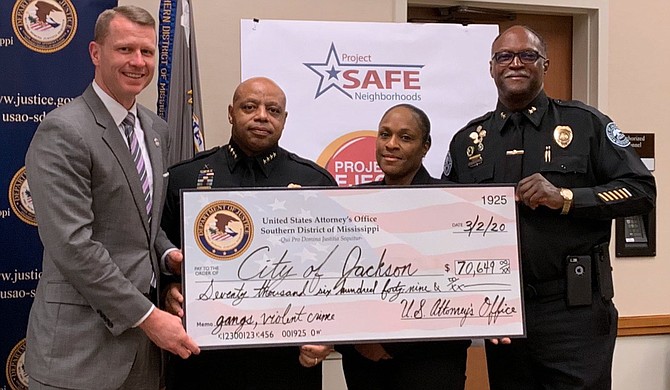 On March 2, 2020, U.S. Attorney for the Southern District of Mississippi Mike Hurst tweeted this photo showing Jackson Police Chief James E. Davis accepting a $70,649 grant check on behalf of the City of Jackson. Hurst’s tweet stated that the City had received the grant under ProjectEJECT “to combat gangs & violent crime in our Capital City.” Photo courtesy Mike Hurst Twitter

The mayor was disputing U.S. Attorney for the Southern District of Mississippi Mike Hurst's tweets announcing that the U.S. Department of Justice is awarding the funds as part of Project EJECT, which is what Hurst has called a Project Safe Neighborhoods crime-fighting strategy in Jackson and other parts of Mississippi since he, the Jackson Police Department and others announced it in December 2017 and joined together in police sweeps and enforcement actions. 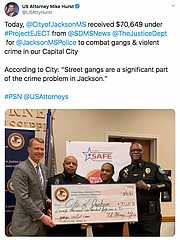 Project Safe Neighborhoods, or PSN, has its roots in the George W. Bush administration, bringing criticism from across the political spectrum. Trump's first attorney general, Jeff Sessions, brought PSN back in 2017.

Lumumba's denial of a Project EJECT connection to the new grant funds came immediately following Hurst's Twitter announcement of grants to Jackson and other Mississippi towns. On March 2, the U.S. attorney tweeted: "Today, @CityofJacksonMS received $70,649 under #ProjectEJECT from @SDMSNews @TheJusticeDept for @JacksonMSPolice to combat gangs & violent crime in our Capital City." Hurst's announcement also included a quote that he attributed to the "City," but without naming any specific city official. It read: "Street gangs are a significant part of the crime problem in Jackson."

Photos with the tweets showed Jackson Police Chief James E. Davis receiving a check in front of a backdrop with logos for both "Project Safe Neighborhood" and "Project EJECT." PSN has traditionally been a collaborative effort between federal, state and local law enforcement to target people possessing guns illegally, using the strategy of sending them into federal prison with expanded sentences, often in states far from their homes and families, as a deterrent. Hurst has expanded the strategy in Jackson and other cities to target gang members and crimes beyond gun possession.

'I Couldn't Be More Clear on the Gang Issue'

Lumumba brought up the grant to reporters outside City Hall the same day as Hurst's tweets, saying that "no mention of Project EJECT has been anywhere involved in our application, nor did (Hurst) mention Project EJECT to me when he said that this money was being given. Nor did Project EJECT have anything to do with it. It was a federal grant that just passed through him."

The mayor questioned Hurst's vague quote attribution to the City as well as a memo on the $70,649 check, that states "gangs, violent crime."

"I couldn't be more clear on the gang issue," Lumumba said. The mayor has been vocal in opposing accusations that gang violence plagues the capital city, urging elected officials and lawmakers to instead prioritize solutions to poverty as well as gun legislation and culture—factors he believes create the conditions for violence. "We've done the data, we've investigated the cases—no one else—and we have learned that (most violent incidents) are due to interpersonal relationships," Lumumba said during a Jan. 13 press conference. "When you have high instances of violence in domestic circumstances, how do you connect that to gang activity? What fear are you creating for the community?," he asked. 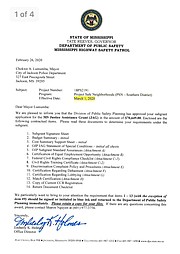 Still, the U.S. Attorney's office issued the following statement on March 2 regarding the new grant award: "The City of Jackson received $70,649 in grant funding to fight gangs and combat violent crime in the Capital City. According to the City's application, the Southern District's 'largest gang presence is focused in Jackson[,]' and '[s]treet gangs are a signficiant part of the crime problem in Jackson. These gangs are actively involved in drug distribution, weapons, and a wide range of violent activity.' The Jackson Police Department ('JPD') will use this grant funding to 'cut off the flow of young people to Jackson's street gangs.' JPD will also utilize this grant funding to purchase software, equipment and technology to' improve [their] knowledge of the gang structure in our community and target the 'worst of the worst' gang members in Jackson." (sic)

After Lumumba's remarks to reporters, the Jackson Free Press requested a copy of the City of Jackson's completed grant application. The City originally declined to provide it and then said to file a public-records request for it, which it has not yet filled. The City did provide a letter from Gov. Tate Reeves' office, dated Feb. 26, informing the mayor that the City's "subgrant application for the MS Justice Assistance Grant (JAG) in the amount of $70,649.00" had been approved. The Mississippi Department of Public Safety administered the federal PSN grants.

The City also provided a copy of a document showing the breakdown of the grant funds, which will go toward purchasing video and crime-surveillance equipment for the Jackson Police Department.

A spokeswoman from Hurst's office responded to the Jackson Free Press' interview request with the message that Hurst was out of town. She did not respond to this paper's request for a copy of the City of Jackson's completed application.

In 2019, Jackson saw one of its deadliest years, with 82 murders, a slight drop from the 84 homicides recorded in 2018—which marked the city's highest murder rate in two decades. The spike in deadly violence in the capital city coincided with Hurst's and Jackson Police Department's December 2017 announcement of a joint task force to curb violent crimes in Jackson. That task force was called Project EJECT (Empower Jackson Expel Crime Together), Jackson's iteration of an old federal policy plan that Sessions resuscitated.

Continuing to work with JPD after Vance stepped down as chief, Hurst's office implemented Project EJECT in Jackson. Last December, Hurst's office announced yet another task force, Project Guardian, also devoted to prosecuting gun crimes. On its website, the U.S. Department of Justice describes it as "a complementary effort to the success of Project Safe Neighborhoods (PSN)." David Kennedy, a criminologist at John Jay College of Criminal Justice in New York described Project Safe Neighborhoods in an interview with the Jackson Free Press as an "evidence-free strategy" and a "criminologist's nightmare." Hurst had claimed to this newspaper that the policy was modeled after Operation Ceasefire, a Kennedy-led policing strategy that many credit with a significant decline in murders and youth homicides in Boston, Mass. Kennedy denied that Hurst's Project EJECT—modeled on Project Exile in Richmond, Va.—is comparable to his Operation Ceasefire, saying that PSN has a history of racist implementation.

Mayor: 'Nothing To Do with Project EJECT'

In January, JPD Public Information Officer Sam Brown told the Jackson Free Press that the City of Jackson and JPD are still participating in Project EJECT. In response to Hurst's tweet, the City of Jackson tweeted: "We are grateful to receive a sub-award from the Dept of Public Safety under Project Safe Neighborhoods; not to be confused w/Project EJECT, which this admin. & the Jxn community fundamentally oppose as it removes incarcerated persons from their family & community support systems."

A City spokeswoman reiterated this message and the administration's lack of support for Project EJECT in a phone call the following day.

"This is how things get misinterpreted," the mayor told reporters outside of City Hall on March 2. "They (Hurst's office) structured it as the City got money through Project EJECT," Lumumba said, insisting that the City had applied for an independent grant.

The mayor said that he had planned to address the issue directly with Hurst and showed reporters a text message to Hurst stating he wanted to talk about his office's announcement of the grant award.

"I'm just making it clear because people will charge us with being dishonest, with trying to hide the ball on something, and this is politics, this is him taking a grant we applied for (independently), had nothing to do with Project EJECT and trying to spin the story."

When the Jackson Free Press asked the mayor if Project EJECT in fact falls under Project Safe Neighborhoods, the mayor responded: "It may be for them," referring to Hurst's office. Lumumba went on to emphasize "the City didn't apply through them, the City applied straight to the federal government for our own values of what we need to do for our safe neighborhoods."

A breakdown of the grant fund allocation shows that the grant money will go toward purchasing Accurint Virtual Crime Center Software, cameras, recorders, and desktop computers for the JPD.