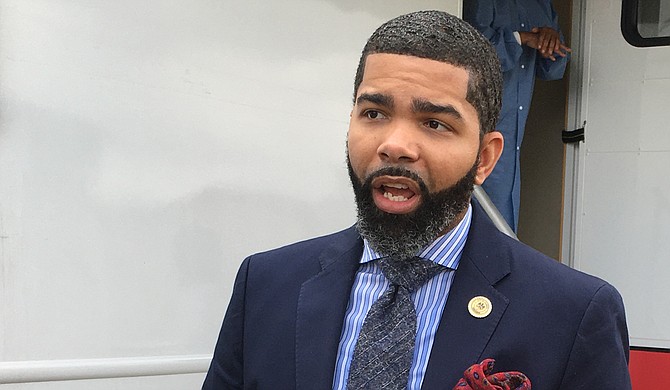 Mayor Chokwe A. Lumumba says United States Attorney for the Southern District of Mississippi Michael Hurst never reached out to him to talk about “Operation Legend,” a plan to bring federal officers into Jackson. Photo by Kayode Crown

Mayor Chokwe A. Lumumba accused United States Attorney for the Southern District of Mississippi Michael Hurst Tuesday of politicizing crime problems in the capital city. He leveled this allegation during a discussion on inviting the federal government to extend Operation Legend to the capital city to stem rising violence.

Ward 1 Councilman Ashby Foote brought the issue of seeking federal assistance to solve the city’s crimes problems up at the meeting as a discussion item.

Council President and Ward 5 Councilman Aaron Banks hinted that the body’s members had talked with Hurst about the issue before the meeting, even if the mayor had not. "I think we've all had the opportunity to talk to Attorney Hurst," he said.

In response, Lumumba expressed displeasure that Hurst talked with council members and neglected to talk to him about it.

"One issue that I have is that in this discussion of federal assistance, the one person that U.S. Attorney Hurst has not reached out to will be the mayor of the city of Jackson in spite of the fact that I have had several discussions with him over time, and I do believe that the federal government can help," he said.

"So I am ready for any sincere discussion, I am ready for any sincere action, in fact, I think it takes all of us, it takes the political leadership, it takes our faith-based communities, it takes our youth leadership, it takes people who provide services,” the mayor continued. “I am willing to dig my hands in the ground and do whatever it takes, but it can't be just trying to be political, and we have the most political U.S. attorney we've had in our city's history."

‘The Crime Statistics Themselves are Quite Alarming’

In the meeting, Foote pointed to the police department's staffing needs, supplied recent crime statistics on it and highlighted what he framed as the success of Operation Legend in other places.

"Right now, I think the last number I heard was 102 positions unfilled within the police department," the Ward 1 councilman said. "The crime statistics themselves are quite alarming."

Foote said that in Jackson from the beginning of the year until Sept. 27, compared to last year, based on the information the Jackson Police Department provided to him, aggravated assault was up 57%, armed robbery (business) was actually down 35%, armed robbery (individuals) up 15%, carjackings go up 217%, homicide up 44%, and rape and sexual assault up 41%.

"Homicide has gotten a lot of headlines lately as they deserve to," Foote said. “It looks like we are close to the record for the past 20 years, and we are still in the month of September—91 versus 63 (last year). Then, a total of these categories up 48%."

"(Operation Legend has) gone into eight cities at this point in time: St. Louis, Detroit, Chicago, Kansas City, Albuquerque, Cleveland, Memphis and Milwaukee," Foote added. He said the federal program, which launched July 8, is already having an effect on violence in those cities.

"What we find is that they're going into neighborhoods that are so underfunded that you have housing problems, you have mental health problems, you have the worst-schools-in-the-state problems, and all of that adds up to creating a dangerous situation on the streets," she said. "If we put money in those neighborhoods, we might find that there's less of a need for people to carry weapons for protection, and we could actually go after the people who are bad actors."

The City of Jackson and the Jackson Police Department worked with Hurst starting in December 2017 on “Project Eject,” a controversial policing strategy originally called Project Safe Neighborhoods that was designed to lock up people caught with illegal guns, but that crime experts such as criminologist David Kennedy, an inventor of the Boston Gun Project and Operation Ceasefire that Hurst said Project Eject is modeled on, told the Jackson Free Press in March 2018 that the application of the project is typically racist and not effective, warning that swelling policing and police raids in communities can actually increase violence. He also scoffed at Hurst’s faulty comparison to the Boston Gun Project he helped create.

In fact, the spike in violence and homicides during Lumumba’s administration has coincided almost exactly with the period since the launch of Project Eject, which Hurst has not limited to arresting felons with weapons, as the program was originally described, also using it for police roundups of gang members and others. Hurst is currently extending Project Eject to the Gulf Coast and other Mississippi locations, while touting its success in Jackson, which homicide and violence numbers do not support.

Mayor Lumumba, who nationally has long been considered a policing reformer, has attempted to distance himself from Project Eject even as his police department continued to participate in it.

At the council meeting, Lumumba listed other areas the city needs the federal government's help, including finding more jail space, while not outright rejecting Operation Legend.

"We can start with the fact that JPD in the midst of this is having to do a catch-and-release policy, (and) the federal government knows that we are under a DOJ consent decree which prevents who we can house in Hinds County (jails)," he said. "They can assist us on that so that we can have more places, more locations, that they can step in and house more people, during this time."

"The DOJ can help in the way in which you talk, a lot of the shooting and a lot of the gun things, a lot of the carjacking is being perpetrated by youths, by people who are not in school, and they can help with that," Lumumba added.

Lumumba said the City is applying for ballistic equipment to investigate crimes faster but demanded that Hurst focus on his work as a prosecutor rather than try to dictate law-enforcement decisions.

"His job is to prosecute cases, and so he can help move along the docket that is held back where cases are available to be done,” the mayor said. “… Instead of having this (political) conversation, let's actually move along that docket because the more people sit there, the less space there are in the jails, the more they have to do this catch and release process."

The mayor suggested other ways of dealing with crime issues focused on youth engagement.

"We have young people (that) are not being organized by anything positive because they are out of school, they are walking around, they are not being engaged," Lumumba said. "So another thing, since we are talking about data, we can talk about the 62% crime decrease before COVID that societies like Stockton, California, experienced because they were able to implement violence-interruption programs and credible-messengers programs. The same can be said of New York City and Washington, D.C."

The mayor’s sister, Rukia Lumumba, is helping build and seek funding for the evidence-based credible-messenger approach in Jackson, based on the Cure Violence model of treating violence like a virus and training people who have been part of street violence, and often served time for it, as “credible messengers” to “interrupt” the violence by building relationships with those at high risk of committing it. The new program is called Strong Arms of JXN.

Ross Adams of WAPT reported yesterday that Hurst, in turn, is accusing Lumumba of “playing politics”—and that he had tried to talk to the mayor about Operation Legend. "Frankly, the mayor called me. I called him back. He called me again. I called him back. I'm still waiting on a return call from him on Sept. 16," Hurst told WAPT.