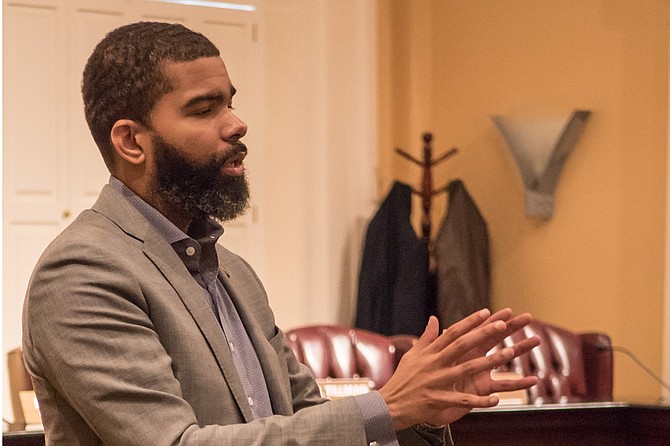 Jackson Mayor Chokwe A. Lumumba is often lauded nationally for his criminal-justice reform efforts, but the reality is different so far on the ground in Jackson. Photo by Delreco Harris.

JACKSON — Mayor Chokwe A. Lumumba is joining 15 mayors from cities in the U.S. in a Mayors for Smart Crime Initiative, the Center for American Progress, announced today. The national organization says the effort is "committed to smarter approaches to public safety and criminal justice that are both fairer and more effective than outdated tough-on-crime tactics."

The initiative includes mayors of New York City, Los Angeles and Gary, Ind., all cities that have struggled with violent crime over the years, as well as accusations of over-policing and police brutality and profiling.

"As a nation, we must deal with the reality that we're not truly serious about reforming our criminal justice system until we get serious about confronting the obvious contradictions within our judicial process," Lumumba said in the group's press statement.

"I didn't need the Lumumba administration to move in lockstep with the Jackson Police Department and refuse to hold officers accountable in the face of terror to understand that the mayor is a high-ranking official in the police state.His record on policing and criminal-justice reform after 19 months in office is mixed at best," wrote activist and defense attorney Adofo Minka in a column for the Jackson Free Press. Minka is a part of the same Malcolm X Grassroots Movement in Jackson that the mayor's father, the late Chokwe Lumumba, started in Jackson.

In a controversial move in late 2017, Lumumba allowed the Jackson Police Department to join the "Project Eject" effort by then-U.S. Attorney General Jeff Sessions, a rehash of the Bush-era Project Safe Neighborhoods policing approach that experts say has a disparate effect on African Americans, while not having a strong impact on violence over time, perhaps even increasing it. U.S. Attorney Mike Hurst leads the multi-agency effort that focuses so far on Jackson. The effort, which ostensibly is to hunt for illegal guns and then send offenders to federal prison far from Jackson, has resulted in a number of large sweeps and arrests, but to date Hurst has not released the outcomes for all the people arrested in those sweeps to enable an analysis of demographics, arrests, charges and indictments.

Hurst told the Jackson Free Press last year that Project Eject was modeled on the Boston Gun Project, which morphed into Operation Ceasefire. But the criminal-justice expert who spearheaded much of those anti-violence efforts says that is just not true. "Unlike Operation Ceasefire, Project Safe Neighborhoods declined to focus on how violent people get firearms, whether legally or illegally," David Kennedy told the Jackson Free Press last year in a stinging rebuke of the Project Eject/Safe Neighborhoods model Jackson police are now participating in.

The Eject approach, which was also endorsed by the National Rifle Association, historically put the prosecutorial onus on the street-level shooters with little attention to where the supply of weapons came from or how to stop it. That led to charges of racial disparities, and contributed to increased distrust between police and communities of color, Kennedy said. Distrust, in turn, can lead to more violence, he and other experts say.

Now, in the wake of rising homicides in Jackson—last year the number was the highest since the crack era ended—Lumumba said last week that the City of Jackson will work with Republican Gov. Phil Bryant, who is former law enforcement, and the State of Mississippi to build up a "real-time crime center," using technology to better track suspects. That includes putting surveillance cameras in poor neighborhoods that are prone to crime and violence. He is also promising body cameras, which bring their own detractors. In fact, many cities are dropping body cameras due to high costs, The Washington Post reported today.

Lumumba and the JPD—he is now on his third police chief in the affable James Davis—have also refused to date to release names of cops involved in a spate of officer-involved shootings, many of which resulted in deaths, or the name of officers being investigated for allegedly hitting an older man over the head last week with a flashlight during a sweep for homicide suspects in the Washington Addition. George Robinson died two days later from trauma to his head.

Under pressure from this newspaper to release the officers' names more than a year ago, Lumumba convened an officer-involved shootings task force that met for months, then recommended that the City release the names within 72 hours of an incident in most cases. However, that has not happened, and an open-records request for a list last week bounced from the city spokeswoman to the JPD spokesman who said it had to be submitted online.

Shielding the names of all officers who shoot and/or kill locally infuriates Minka, the activist. "He could have issued an executive order mandating the names of officers involved in violence against civilians be released without the smoke screen of a task force. However, he won't because it is not politically expedient for him to do so," he wrote in a different column for this newspaper.

Some Progress to Date, Under Pressure

The mayor did respond to this newspaper's reporting and editorials calling for JPD to stop releasing mugshots of juvenile suspects and staging media perp walks of juveniles with an executive order stopping the practices.

In December, the City announced that it was moving ahead with the mayor's campaign promise to create a credible messenger/violence interrupter program in Jackson. His sister, Rukia Lumumba, is spearheading that effort and recently announced a seed grant of $150,000 to train the first two credible messengers, Terun Moore and Benny Ivey, the former leader of the Simon City Royals, a prominent white street gang, in Rankin County.

Last year, the City convened a well-attended people's assembly, led by the mayor's sister, to brainstorm ideas about crime. The first public sign that the administration was moving on those ideas came last week when the mayor's officer presented a three-part plan to reduce crime to the Jackson City Council in the wake of high-profile homicides, including Rev. Anthony Longino. That plan includes the crime center and cameras, as well as a focus on programs to prevent crime and violence before it happens.

"If you're serious about eradicating crime, you must eradicate the conditions that lead to crime, conditions of poverty, and lack of access to opportunity. In Jackson, we are attempting to build a dignity economy that focuses on the inherent dignity of every citizen—those who have never been impacted by crime, returning citizens, and those who have been victimized by crime."

Ed Chung, the vice president for Criminal Justice Reform at the Center for American Progress, lauded Lumumba's leadership in the statement. "We are thrilled to support Mayor Lumumba's bold leadership toward building a safer community rooted in racial and economic justice for all of Jackson's residents," he said.

Lumumba is in Washington, D.C., this week and is unavailable for comment, his communications office said in a statement about Robinson's death yesterday. The City is holding a press conference today in City Hall at 3 p.m. about Robinson's homicide.