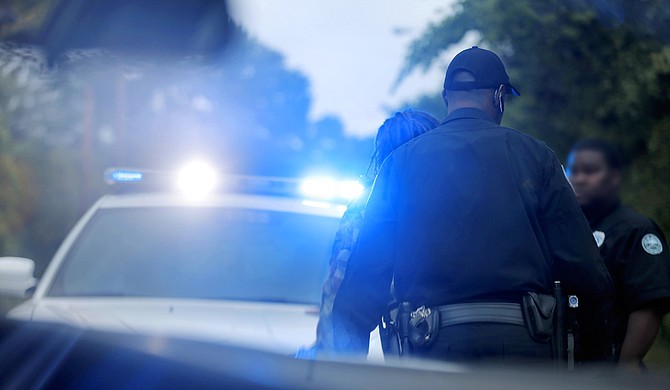 Outside agencies should investigate if an officer used excessive force, and JPD must not withhold names, how long these officers have been with the force or if they have a record of using excessive force. Photo by Imani Khayyam.

Mayor Chokwe Lumumba touted his "progressive agenda" at a Feb. 27 press conference before signing an executive order to stop the release of mugshots of people the Jackson Police Department shoots.

Lumumba said JPD will stop releasing mugshots of juveniles, including those arrested as adults, a dangerous practice that can increase violence later and scar falsely accused kids. Even though his executive order did not include the juvenile mugshots, Lumumba said the ban would include those charged as adults, which is a major policy shift.

As recently as Feb. 16, the JPD sent reporters a mugshot of a 14-year-old girl charged with murder who was in custody when her photo went out.

This order does not address the glaring need for JPD to release names of officers who use excessive and/or fatal force on civilians—the progressive needle does not move without this transparent practice, which departments around the country embrace often within 48 or 72 hours of an incident.

Lumumba has been laissez-faire on the matter, saying he does not have a stance on releasing the names either way. After seven officer-involved shootings since Lumumba took office in July 2017, JPD has identified none of the shooters. Lumumba says his executive order should be an example for other municipalities and states to follow. But this is inconsistent.

The mayor introduced Interim Chief Anthony Moore as someone "familiar with the trends around the nation, as he teaches criminal justice. The chief said he would not identify officers who have shot civilians. That refusal ignores the U.S. Department of Justice's 2015 advisement for departments to release names of officers involved in critical events, including shootings, within 72 hours of the incident.

Moore said it is about officers' safety, even as all departments face the same issue. The DOJ's report said police could take a couple of days extra if needed to ensure an officer was protected, but not several weeks or months. Moore also said it was a personnel issue, to which we heard someone respond, "An officer shooting is not an HR issue."

Now, JPD investigates officer-involved shootings internally and keeps the names private indefinitely if they ever become public knowledge. It feels like a cover-up even if it is not meant to be one. Outside agencies should investigate if an officer used excessive force, and JPD must not withhold names, how long these officers have been with the force or if they have a record of using excessive force.

The mayor's executive order loosely says that communities of color have always had complex relationships with law enforcement, but that national trends around violence and police-involved shootings do not necessarily reflect reality in Jackson with its majority-black police force.

Let us be clear: Race does not give Jackson license to withhold vital information from the public. Doing so will only increase distrust and perhaps bad policing, regardless of the City's demographics. The City must release the names immediately.