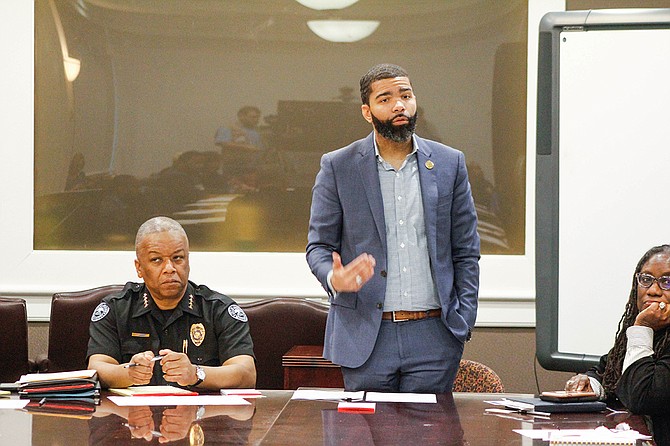 JACKSON — Last month, Mayor Chokwe Antar Lumumba had prepared to make an executive decision about how the Jackson Police Department would handle transparency following officer-involved shootings. There have been two deadly ones in Jackson this year alone, and the mayor fundamentally supports releasing the names of officers who shoot citizens, he says, even though the police department is against naming them.

But in the name of a people-oriented government, Lumumba opted to create a task force of citizens and law enforcement to develop the City's policy on how it will handle these instances in the future.

"[I] thought that if we were going to truly make a decision for the community, the community should be involved," the mayor said April 11 at the first officer-involved shooting identification task-force meeting.

Some have critiqued the mayor for choosing "bureaucracy," but Lumumba contends that this is the best way forward, entrusting that the task force will move swiftly but not at the sacrifice of being diligent and prudent.

The task force has the full ability to request any City documents it needs, to have officials to come and speak before them, and to determine how long the process of developing policy needs to take.

While this could be the first task force of this exact nature the nation has ever seen, the 21-member group has a lot to work through including getting nearly two dozen people to reach a consensus on an extremely divided issue.

Who's Who on the Panel?

Rukia Lumumba, the mayor's sister and a social and economic justice advocate, walked into the second officer ID task-force meeting with a list of suggestions on April 16, although she had missed the first meeting.

Most of her motions passed, including moving the meeting times, expanding public comments to at least 20 minutes and adding an additional youth member. She also suggested the group meet in more neutral spaces, as the first meeting took place in a city building across from Jackson City Hall and the second at the police academy.

The group tabled her suggestion of incorporating a citizen affected by an officer-involved shooting with no pending litigation.

The other members who join Rukia Lumumba on the task force include at least five Jackson police officers, who sit next to each other in a bloc. The task force has not yet gone into the weeds of everyone's viewpoint on releasing officers' names, but Paul Hobson, a detective with JPD and president of the Jackson Police Officer Association and member of the task force, has spoken on behalf of JPD's views recently and often in meetings.

"I can tell you and assure you that 100 percent of our department is against the release of officer names as it pertains to shootings," Hobson said in March.

The mayor and JPD Interim Police Chief Anthony Moore sat in on the first meeting to offer guidance and show support, but they are not members of the task force. With not everyone coming to both meetings, it is fuzzy as to who will remain as the core group of devoted individuals throughout this process.

Keyshia Sanders of constituent services for the City of Jackson and the mayor's chief of staff, Safiya Omari, represent the City as non-voting members. Former school-board member Jed Oppenheim of the W.K. Kellogg Foundation takes the minutes for the group. Kay Gex, who only came to the first meeting, is the mayor's neighbor who said she is committed to law enforcement. Nsombi Lambright, a past executive director of the ACLU of Mississippi and current director of a nonprofit called One Voice, is also on the task force. There is also Matt Bolian, a former military intelligence officer and now the channel development manager at C-Spire, and Frances Greer-Morris, who served on the City's Historic Preservation Committee.

The Clarion-Ledger critiqued the mayor for including a man named Terun Moore on the task force. Moore was convicted of capital murder in 2001 at the age of 17 and was sentenced to life without parole. The late Chokwe Lumumba served as his lawyer back then.

A Mississippi Supreme Court judge vacated Moore's sentence in 2014, citing a 2012 U.S. Supreme Court ruling that life without parole for juveniles is unconstitutional. At the City's Crime and Justice Summit on April 19, the mayor called out the Ledger for the pushback, although their reporter had left for the evening.

"I knowingly put a member on that board who was someone that was a 'returning citizen' because I thought that that perspective needed to be incorporated in the conversation... . I think that the perspective that does not allow for that to be added to the conversation is an elitist one," the mayor said during the discussion.

Nationally speaking, Jackson is taking a unique approach to figuring out how the City will handle police shootings in the future. This is not a citizen's review board as seen in other cities like Charlotte, N.C., and Atlanta, Ga., where a group of appointed citizens review police misconduct, among other things. However, the officer ID task-force could implement a citizen's review board in the forthcoming policy.

What is not different is that police departments throughout the nation have been trying to decide how to deal with releasing names or withholding them in the post-Michael Brown and Ferguson era. In 2016, The Washington Post found that following the 990 lethal officer-involved shootings in 2015, one in five officers' names went undisclosed, with departments citing state laws or department-wide practices for keeping the names a secret.

But, there is more than just the police department feeling unsavory toward a potential release of officers' names.

Adofo Minka, a criminal defense attorney who used to work with the mayor in the early days of both men's legal career, interrupted and effectively brought the first task-force meeting to a close. He wanted community members to be able to speak and brought a list of 15 questions he wanted to raise before the task force. As he sat with the wife and sister of Lee Edward Bonner, whom JPD shot and killed in February, he demanded to know why nobody from a victim's family was appointed to the task force.

When Minka got up toward the end of the meeting and passed out the list of questions to the task-force members, Omari asked him to stop.

"This is a public meeting, ma'am," Minka said to Omari.

"This is a meeting of this task force, the public is invited...," Omari responded before motioning to adjourn.

Ultimately, the Bonner family walked out in tears after not being given a chance to speak, as tensions rose between Minka and Omari.

With Rukia Lumumba's motion a week later to include an impacted family member still out on the floor, a family like the Bonners may be included in the future, but only time will tell.

Email city reporter Ko Bragg at [email protected] and follower her on Twitter at @keaux_. Read more at jfp.ms/policeshootings.