City to Reveal Names of Officers Involved in Past Shootings, Adopt 72-Hour Policy 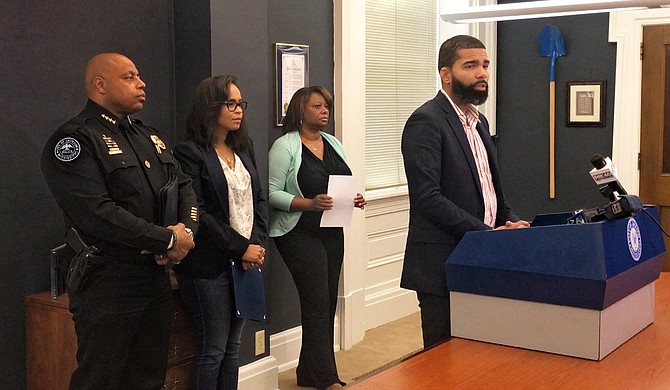 Mayor Chokwe Antar Lumumba announced on Friday, Sept. 28, that he would soon sign an executive order adopting a 72-hour name-release policy following officer-involved shootings in the City of Jackson. Photo by Ko Bragg

JACKSON — Mayor Chokwe Antar Lumumba announced on Friday, Sept. 28, that he would soon sign an executive order adopting a 72-hour name-release policy following officer-involved shootings in the City of Jackson, though he did not commit to a date it would go into effect. The policy would be applied retroactively, the mayor said, meaning the City would release the names of the officers who have fired their weapon at citizens since Lumumba took office in July 2017. A Jackson Free Press analysis counts nine such incidents, both fatal and nonfatal, between July 3, 2017, and press time.

"This policy and the recommendations from the task force put us well on the trajectory of being the radical city that we have proclaimed to become," Lumumba said last week.

Lumumba formed an officer-identification task force in April after a rise in officer-involved shootings. For five months, the group grappled with the timeframe in which the City would release names of officers when they shoot citizens. The Jackson Police Department has never released the names of officers who discharge their weapons in the line of duty. On Sept. 6, the group voted on a set of recommendations that Lumumba publicly accepted on Friday.

Davis also said he did not worry about the rank-and-file having issue with this policy because the community knows them, and they don't hide anything.

As a point of clarity, the mayor said multiple times Friday that the task force voted on recommendations unanimously. However, of the 11 members who voted on them Sept. 6, there were 10 ayes and one nay from Detective Paul Hobson, who presides over the JPD police union.

The mayor addressed criticism that he could have just implemented such a policy months ago "with the stroke of a pen."

"I believe that the citizens voted for an administration that promised that it would engage the community in critical decisions such as this," he said, echoing his campaign slogan: "When I Become Mayor, You Become Mayor."

Still, Lumumba said if he had the opportunity to do this again, he would not change a thing. The task force will continue to meet to review JPD's use-of-force policy and to consider a citizen's review board.

Initially, the mayoral-appointed 21-member group contained seven JPD officers, but at the final meeting on Sept. 6, only 11 members were present, four of whom were JPD officers. Lumumba said he will reserve his right to make any additions to or subtractions from the group, but intends to keep the same bloc of people.

Nsombi Lambright, the executive director of One Voice Inc. and an officer-ID task force member, said she hopes the recommendations will be a first step in improving community relations.

The recommendations the mayor supports are as follows, verbatim:

(1) The Jackson Police Department public information officer, or designee, will coordinate the release of information related to officer-involved shootings as approved by the chief of police or designee.

(2) After the immediate family of the injured or deceased civilian has been informed, JPD will expeditiously issue a public statement to inform the public of the investigatory timeline and process.

(3) JPD will not publicly release any potential criminal history of the involved civilian not relevant to the alleged incident.

(4) Within 72 hours of an OIS, JPD will release the names of any officers who discharged a firearm, absent exigent circumstances such as a credible threat to the individual officer.

(5) Within 72 hours of an OIS, JPD will release video that provides a general overview of what occurred, if any such video has been identified and authenticated. This shall only happen after the immediate family of the injured or deceased civilian has been informed and allowed to review the video. (Exception: video will not be released to the public if such video compromises any ongoing investigation.)

(6) All information is presumptively releasable at the conclusion of an investigation.