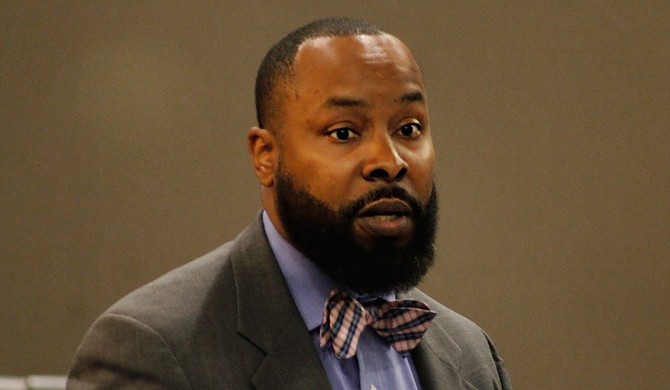 Paul Hobson, a detective and president of the Jackson Police Officers Association, is a member of the mayor’s offier-ID task force. Photo by Stephen Wilson.

JACKSON — Sixteen of Mayor Chokwe Antar Lumumba's 21 appointees to the officer-identification task force gathered at The Cedars in Fondren Monday night to decide if and how the Jackson Police Department will release names of police officers who are involved in shootings, as well as the timeframe in which that would take place.

It was the group's third meeting, five weeks into the effort to resolve difficult questions around exactly when the public has the right to know the identity and circumstances around an officer-involved shooting in Jackson.

The mayor developed this task force under an executive order at the end of March because JPD has a longstanding practice of not releasing names of officers who shoot people, but nothing formally on the books. With eight (there were seven at press time, with another one taking place early Wednesday morning) reported officer-involved shootings since Lumumba took office in July 2017, the mayor seeks a solution through community input, even as he leans toward releasing officer identities.

"It is time that we adopt a city policy which reflects the unique responsibilities and the unique concerns of both law enforcement and the concerns of citizens," Mayor Lumumba said at the first task-force meeting on April 11.

But before the task force dealt with its mission Monday night, it debated whether they should widen the scope even further. The discourse revealed the emotional undercurrents of this issue and also the need for structure and clarity as the task force gets further into the process.

At Monday's meeting, the task force hashed out something that has been eating away at their progress for weeks: Should the task force also tackle larger criminal-justice issues? Members discussed whether they should ask the mayor to expand the scope of the task force so that the members could also consider procedures such as reworking the City's nearly 15 year-old use-of-force policy and creating policy around excessive force in a broader sense.

JPD Officer Christian Vance made the point that officer-involved shootings, while the circumstances can vary, tend to be more cut-and-dried compared to excessive-force situations that can range from using a Taser to a baton. Vance said that with excessive force, you have to be there to understand the issues at play.

"I am resigned to the fact that people are not always going to understand what I'm doing and that's fine and might see it and be upset, and that's OK if I'm doing my job and doing it correctly," he said. "... How I deal with community policing—policing is not what happens at the call; policing is everything in between the call."

Paul Hobson, a JPD detective and president of the Jackson Police Officers Association, also characterized excessive force as "subjective." The union leader reminded the group that its singular task is to develop policy around officer-involved shootings, without getting into the weeds and particulars of use-of-force policies.

"With respect to use of force, none of us are qualified to make those determinations, so that's my monkey wrench," Hobson said.

Keyshia Sanders, director of constituent services for the City of Jackson and a non-voting member of the committee, urged the group to stay focused on the narrow task because she was concerned about losing some of the volunteers who agreed to serve and develop policy around officer-involved shootings only.

Since Rukia Lumumba, the mayor's sister and a social and economic justice advocate, started attending the task-force meetings, she has served as a de-facto facilitator to help discussions move swiftly and to ensure that those who want to speak get time to do so, and that not all the meetings are in police facilities.

Although the group did not get through all the agenda items Monday, her presence ushered the group toward reaching the consensus that they would stick within the mayor's original order for the task force before getting to deep into other criminal-justice issues in the City.

The group ultimately voted 11-4 to keep the scope narrow, with Rukia Lumumba, Jed Oppenheim of the W.K. Kellogg Foundation, Nsombi Lambright of One Voice, Inc. and attorney CJ Lawrence who chairs the task force voting nay, and Hobson abstaining from the vote.

Outside the roughly half-dozen police officers who regularly attend the ID task-force meetings, few people have a clear idea of how the Jackson Police Department handles officer-involved shootings.

Both police officers and other community members did agree Monday on the need for transparency when an officer shoots someone, but debated whether that means releasing names but no photographs or keeping the names sealed but informing the community regularly about the status of the investigation.

Many came to the table with firm stances about protecting officers' names and identities unless a grand jury indicts them. Two officers spoke about the dangers of the job and the perceived heightened risk of retaliation if their identities are out there.

"How do you assess my danger?" Vance said. "I don't know how you assess an immediate threat to me. ... [W]hen you do release my picture that threat goes up—it's not a problem until it's a problem."

"I'm in favor of not putting that officer out front until all the investigation is done, not only for his safety, his family's safety," he said. Starks also advocated for more relationships between the community and JPD.

Many on the task force have expressed concern about releasing a photograph of the officer to the media following an officer-involved shooting. But Lambright said most people in the community already know who the officers are, so the photographs are less of a concern and that people really want to know what happens afterward in terms of discipline.

Lawrence, task-force chairman, agreed with Lambright. "I think that the ambiguity comes in when if I can't even get your photograph, I can't even hear about who it was that it committed the action, then there's no way that I have any understanding of what it is that is truly going on in this particular process...," Lawrence said Monday.

"I think it's the ability not to necessarily tell the community every step of he investigation what's going on, but to keep the community engaged with regard to the fact that something is going on...."

At Monday's meeting, the group agreed to bring in guests from JPD's internal affairs unit, which investigates officer-involved shootings among other accusations against police officers; a representative from the Mississippi Bureau of Investigations, which investigates officer-involved shootings in the Jackson metropolitan area; and a representative from the Hinds County district attorney's office, which handles the grand jury proceedings in these cases once an investigation comes to a close and an officer is charged. The task force has not identified the guests, yet.

With their clearer scope in mind, members will reconvene May 21 at a location that has yet to be announced.