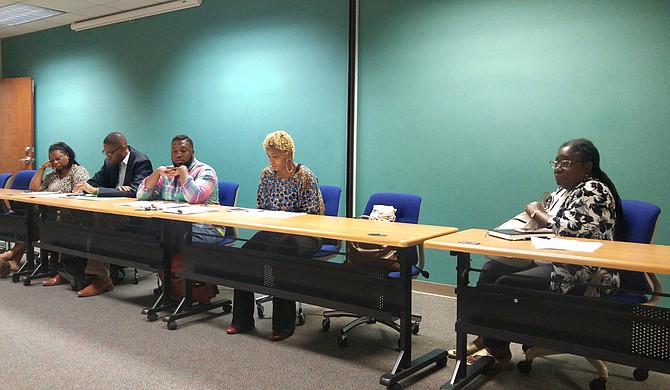 JACKSON — The Officer ID Task Force met Monday night to discuss a draft of a policy to identify Jackson police officers who shoot people. The draft policy says the City will release the names the officers who discharge their guns within 48 hours. Then, within 72 hours, the public will receive video and pictures of the incident. However, the group did not get that far.

Mayor Chokwe A. Lumumba formed the task force in April after a spate of officer-involved shootings since he took office in July 2017. The Jackson Police Department, to date, has refused to release any of the names of police officers who shot people—a long-time and controversial policy in the capital city.

Only seven of Mayor Chokwe A. Lumumba's 21 appointees attended the meeting at the Mississippi e-Center at Jackson State University. The group could take no official action because it needed 11 members present to reach a quorum. The mayor is in New York City this week with others mayors attending the Bloomberg Harvard City Leadership Initiative.

During the hour-long meeting Monday evening, the small group discussed the first four items of the nine in the policy draft. 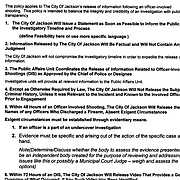 First, the draft says the Jackson Police Department will release a statement "as soon as feasible to inform the public of the investigatory timeline and process." Before the task force finalizes its recommendations, the term "feasible" needs to be better defined, member Rukia Lumumba, the mayor's sister, told the group.

Setting the deadlines is an important role of the task force, Lumumba said. She suggested setting a deadline of 24 or 48 hours after the shooting. The group will revisit the timing at its next meeting.

"If everything is cut and dry, I don't see why it should take them extreme amount of time before that statement is issued," JPD Detective and task force member Paul Hobson said.

The draft policy also says information released needs to be factual and not contain any prejudgment, and released information should not compromise the investigation.

Task-force members were concerned that the "pre-judgement" item could undermine the first part of the draft, with some suggesting it be regulated to a footnote or completely removed from the final policy.

"I do understand the message here, but there's something about it I think is missing," Lumumba said. "It also allows people to interpret this, number two, as trumping number one."

Item three mandates that the police chief or JPD's public information officer needs to approve information prior to release. The board decided to move item three to item one, because it establishes who communicates with the public.

Item four says police will not release criminal history unless it is relevant to the investigation or if the officers knew the history before the shooting. The information is available through public information requests, but it is not something the City should give out without that request, the Mayor's chief of staff and a task force member, Safiya Omari, said.

The current wording about criminal history refers to the person as a "subject." The board decided "subject" was not the correct word, but they worried about the connotation of using "victim."

"I don't have a problem with the language 'victim,'" Lumumba said. "... I'm concerned about the lack of humanity associated with it and the lack of transparency and honestly the lack of fairness with shifting the language from 'victim' to 'subject' or 'defendant' or 'person involved.'"

They did not come to decision about what to call the person an officer shoots and decided to return to the issue at the next meeting. The board also decided that family members would receive information before it is released to the public.

The police chief also cannot condemn or approve the officer's actions until the investigation concludes, the draft says.

Finally, all information is releasable at the end of the investigation, absent "narrow circumstances." The board did not define narrow circumstances, because it did not make it all the way through the policy. It also did not get to the item calling for the names of officers to go out within 24 hours.

The task force's next meeting is at 6 p.m. July 30. The location is not yet determined. The meeting is open to the public.