EDITORIAL: State Should Not Shield Names of Officers Who Shoot, Kill 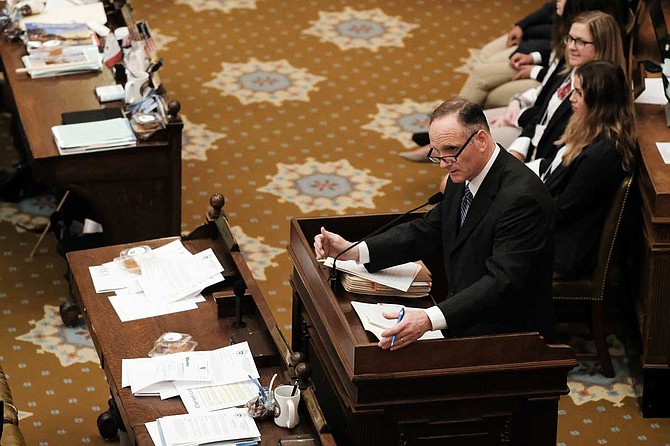 Rep. Mark Baker, a Brandon Republican, introduced House Bill 1289, which would essentially keep Jackson, and the rest of the state, at an unacceptable status quo of just never telling the public what officers used deadly force, or even the circumstances. Photo by Ashton Pittman.

Members of the Mississippi Legislature have jumped into the middle of serious and historic problem that the City of Jackson has grappled with over the last year—whether or when law-enforcement officers who shoot and/or kill non-police should be identified. The City of Jackson convened an officer-ID task force that met for months; the proposed legislation would simply negate its work.

Rep. Mark Baker, a Brandon Republican, introduced House Bill 1289 that would essentially keep Jackson, and the rest of the state, at an unacceptable status quo—the original language would prohibit local municipalities from releasing the names of officers involved in shootings, with no time limit attached, and with penalties if they do. That bill would return Jackson to where it was a year ago—upholding its tradition of just never telling the public what officers used deadly force, or even detailing the circumstances around the shootings if they do not choose to release it.

That means that the public just keeps wondering what use-of-force cases were investigated adequately, actually justified, what punishment the officer received if any, whether any officers fire their weapons than others (they do). This is decidedly not the way to build trust between community members and law enforcement—the kinds of trust that criminologists will tell you both keeps police officers and neighborhoods safer, but also yields intelligence information about dangerous criminals.

Trust is key to any practice claiming to be "community policing."

Rep. Chris Bell, a Jackson Democrat, led the charge in challenging the bill, making the point that not all police officers, as in any profession, always do the right thing. We agree; it does not make sense to give police officers blanket cover; they are, after all, public servants paid by the taxpayers who carry guns throughout our city and state. With no public checks and transparency of their decisions and actions, we cannot know whether they are acting correctly or even whether law-enforcement leaders are targeting problem areas that emerge—such as how to deal with a mentally disturbed homeless man with a knife short of shooting him in the chest—with better training.

The Jackson Free Press received a plethora of documents about nine police shootings involving 15 Jackson officers in January. We are still studying the documents, but two things seem true at the same time: (a) Some of those shootings were likely justified, and the public should get to know why in order to keep trust intact. And (b) it seems clear that some officers on the Jackson force are either not trained well, or do not believe they have to follow their training. The public should know that, too.

In addition, without the list the City of Jackson finally provided us, the public and the media had no way of knowing that eight of the officers who shot people went before a Hinds County grand jury last April, which did not indict any of them. We are entitled to know that and to know the details of the shootings, especially in a year when our district attorney, who presents those cases to the grand jury, is up for re-election. Transparency is key to every part of this process.

After the debate on the House floor, Baker and others supported an amendment requiring names of officers involved in shootings to be released within 180 days. That is not acceptable, and it is far from national best practices that call for them to be released within 72 hours of the incident, unless there is a compelling reason not to. The documents we received about Jackson officer shootings show why that long window is a problem.

One officer, Rakasha Adams, shot two people within about two months of each other. Why was she not on paid leave after the first pending an investigation? And with the six-month window to release names, the public would not have known full details of her first shooting, which was of the homeless man with the knife.

Other cities release officer names just as they often release names of non-police officers under investigation for a shooting or other crime. They also release enough details that the public has a good sense of what is going on. It makes no sense to allow police departments, especially those investigating themselves, to operate in secrecy for six months. And it's an insult to the families of those injured and killed due to police force.

Rep. Baker is running for state attorney general this year, and we suspect this is a play for the conservative protect-police-no-matter-what vote. But that does not mean that it makes sense. Anybody from any neighborhood can fall victim to a rogue cop, or one suffering from emotional or mental issues that can lead to over-policing. Police cannot have carte blanche to use whatever source they want, undergo investigations by their own departments and then have all the outcomes shielded from the public.

The argument that shielding their names is vital to protect them is also not as simple as Baker tried to make it on House floor, claiming that identifying officers is throwing them "to the wolves." For one thing, most officers shoot people in communities where people know who they are already (especially if police departments are actually engaging in "community policing.") And in cities as small as any in Mississippi, including Jackson, it is highly unlikely that families of people shot or killed cannot identify the officers and, in fact, the rumor mill usually does, often right on Facebook. As national policing experts say, departments can provide officers additional protection if it is warranted or due to valid threats, same of happens around the country. But a blanket shield of identities and other details is poor policy.

That is not transparency or responsibility to the people police serve. We applaud the Jackson delegation, nearly all of whom that voted against this bill even with the amendment. (Rep. Kathy Sykes voted for it.) We also appreciate that Rep. Joel Bomgar, R-Madison, voted against it. We respectfully submit that the conservative approach should also fall on the side of transparency, not allowing police to build walls around themselves and their actions. Most of them do not shoot for the wrong reasons; it is wrong to protect those who might from public scrutiny.