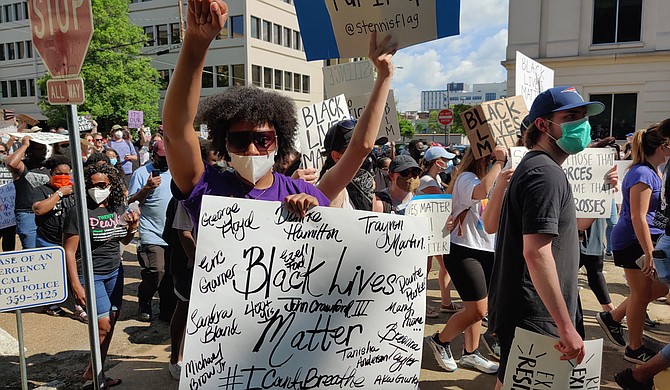 A protester at the June 6, 2020, Black Lives Matter rally in downtown Jackson holds a sign emblazoned with the names of some of the many police-violence victims in America in recent years. Photo by Nick Judin

Thousands of protesters took to the streets across the state of Mississippi this weekend, calling for freedom from racial injustice and an end to police brutality. From Gulfport to Oxford to Natchez, city squares and the halls of power echoed with cries of “black lives matter” and “no justice, no peace.”

In Jackson, a Black Lives Matter protest at the Governor’s Mansion on June 6, which was expected to draw roughly 400 attendees, swelled to possibly 4,000 or more. The action, a march in Mississippi’s capital city in honor of George Floyd and countless other victims of police brutality, is likely to be the largest protest in Jackson since Mississippi Freedom Summer of 1964.

The protest began at 3 p.m. with a series of speeches from the organizers as well as progressive Mississippi leaders and politicians. A crowd that filled out Capitol Street quickly surrounded a stage erected in front of the Governor’s Mansion. Behind the stage, the face of Emmett Till emblazoned on cloth watched over the proceedings.

Calvert White, vice president of the Alcorn State University NAACP, took the stage to share his own experience growing up as a black man in the South. "This existence, each of ours, has nuances, twists and turns,” said White. But not all of those experiences include the privileges whiteness affords, White explained, pausing to fight back tears as he noticed his mother, Candice, in the crowd in front of him.

“America is only as free as the people of Mississippi are free!" White cried out.

‘This Is Just The Beginning’

“We’ve been fighting the same battle for centuries,” one protester told the Jackson Free Press. “We’re tired, exhausted, and we’re not going to be passive.”

“(People) need to understand that this is just the beginning. No justice, no peace,” said another demonstrator. His shirt displayed the words “I can’t breathe,” the cry for help that has become symbolic of the oppression and violence in the black experience in America, especially since Eric Garner’s death by police choking in New York City in 2014.

The march passed the State Capitol, the Mississippi flag fluttering limply in the breeze beneath the Legislature’s dome. Furled against its pole, the Confederate stars and bars were its most visible aspect. “Change the flag!” the crowd chanted as they rounded the street.

'No Free Kill' Protest in Jackson

The Mississippi Poor People's Campaign led the 'No Free Kill' protest at the state Capitol on Friday, June 5, to demand the evidence that led to the dismissal of the charges against white former Columbus police officer Canyon Boykin for the 2015 shooting of Ricky Ball, a black man.

No violence or provocations interrupted Saturday’s protests. Nor did a heavy police presence box the demonstrators in. The event unfolded as its organizers intended: peacefully, though on a much larger scale than they could have anticipated. As the march drew to a close, a hush fell over Capitol Street. Attendees observed eight minutes and 46 seconds of silence, the exact length of time a police officer’s knee pinned George Floyd’s neck to the pavement in Minneapolis.

For many of the protesters, their demands were far-reaching but succinct: an end to police brutality, through reform, defunding or outright abolition. A new social contract that prioritizes black lives. An end to 400 years of racism at the root level of the state.

Protest organizers had their own list of specific demands they shared at the end of the event. Organizers called for the removal of all Confederate symbols and memorabilia, including the state flag; the reopening of the case against Columbus police officer Canyon Boykin for the shooting of Ricky Ball; the resignation of Petal Mayor Hal Marx, who defended the actions of the police officer who knelt on George Floyd’s neck; a reduction in the state’s prison population and equitable health care for those incarcerated there; and the centering of public health in the state’s upcoming decisions on university and school openings.

After the protest, some of the event’s organizers took questions from the press.

Taylor Turnage, president of the Youth and College NAACP, explained the significance of the phrase “Black Lives Matter.”

“What people have to understand is we say Black Lives Matter because it’s been evident that they don’t,” Turnage said. “There honestly should be no debate about human lives.”

Maisie Brown, youth program director at the Institute for Democratic Education in America, held up a placard with the face of Mario Clark. In 2019, Jackson Police Department officers beat Clark, who suffered from paranoid schizophrenia, to death after being called to escort him to the hospital.

“Me and Timothy’s decision to hold that picture up of Mario Clark, you can see the look on people’s faces change. You saw his mom crying,” Brown said, comparing it to the photograph of Emmett Till after his murder published in Jet Magazine in 1955. Brown is also an occasional columnist for the Jackson Free Press.

“It’s a put-it-in-your-face moment. I think we want for them to see it head on, right there, right now,” organizer Timothy Young said.

No Free Kills, Jackson and Beyond

The first day of a weekend of protest began at the Walter Sillers Building across the street from the Capitol, as representatives from Mississippi’s Poor People’s Campaign attempted to deliver a letter to Attorney General Lynn Fitch.

The letter demands the evidence that led to her office dismissing the charges against former Columbus police officer Canyon Boykin, who in 2015 shot and killed Ricky Ball, 25. In 2016, a Lowndes County grand jury indicted Boykin for murder, asserting that Boykin “did willfully, lawfully, feloniously and unnecessarily kill Ricky Ball.” Fitch dismissed the charges with prejudice, precluding the opportunity for a jury to try Boykin on the charges in the future.

Representatives from a number of activist groups, including Mississippi’s Poor People’s Campaign, led chants as the crowd gathered outside the building housing the Attorney General’s office: “No free kills”; “no justice, no peace”; “get your knee off my neck.”

Capitol police barred entry to both the Walter Sillers Building and the State Capitol, leading to the gathered demonstrators shouting at the walls of the new Capitol so any legislators and leaders inside the building could hear those who elected them. Eventually, Rep. Zakiya Summers, D-Jackson, came outside to hear the protesters out.

Elsewhere in Mississippi, large crowds gathered in Gulfport, Starkville, Oxford and numerous other Mississippi cities, congregating in public parks and on street corners to make their voices heard.