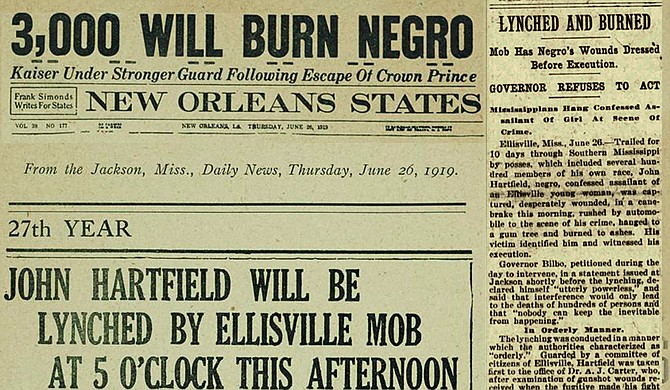 Southern newspapers, including the Jackson Daily News, announced the lynching of John Hartfield in Ellisville before it happened, probably helping increase the crowds that watched and later mailed postcards about his brutal lynching. Hartfield was accused of sexual assault of a white woman, but was offered no due process during the Red Summer of 1919 when white people were murdering and brutalizing Black people across the U.S., as well as burning their homes and businesses. Clippings: Newspapers.com

The Jackson Daily News hit the streets in Mississippi on June 26, 1919, with a staggering headline: "John Hartfield will be lynched by Ellisville mob at 5 o'clock this afternoon." The New Orleans States newspaper was more specific: "3,000 Will Burn Negro."

The bombastically racist Gov. Theodore Bilbo knew of plans underway for Hartfield's lynching in Jones County, but he told the press there was nothing he could do.

The next day, the Daily News and other outlets described droves of white men, women and children showing up to watch the upstanding mob, led and protected by law enforcement, hang the Black Mississippian to a tree, lighting a fire beneath. The posse had shot Hartfield when bloodhounds sent from Crystal Springs found him, but the mob fired more bullets into him as he hanged and burned. Then, watchers took body parts for souvenirs. Photos of Hartfield's lynching appeared on postcards that white people purchased and mailed to other white people.

Hartfield's supposed crime was raping a white woman—a likely lie not considered any more credible now than most reasons for lynchings in our state, which research shows had the most, or close to it, depending on the study. It was also during the Red Summer of 1919, when white mobs lynched and massacred Black people across the United States, burning their property and businesses. If you want to understand U.S. mob violence, start with that time period.

I learned about Hartfield's lynching on a road trip to Ellisville the day before Kenosha, Wis., police fired seven rounds at Jacob Blake's back. The most common excuse we hear is Blake was wanted for a sexual-assault warrant. So, all of us should be outraged enough to think it was just fine for an officer to shoot the father repeatedly in the back? He did something bad, police suspected, so anything goes? He's presumed guilty?

My phrase for such twisted excuse-making for brutality, by police or not, is "lynching logic." It's a curse our nation has allowed to fester and kill under for centuries now. Put simply: It's OK to do anything one wants to a Black person because he or she did something bad. No stinkin' due process is needed to prove it.

It's what happened to Trayvon Martin, to a child called Tamir Rice, to a woman named Breonna Taylor, and to Eric Garner because he was selling loose cigarettes to feed his family, for God's sake.

People are using lynching logic when defending police firing at Jacob Blake's back seven times by saying he was accused of sexual assault. Photo courtesy GoFundMe

But the lynching logic used to convince women that heinous barbarism is fine due to alleged sexual transgressions especially turns my stomach as a sexual-assault survivor. How many times has the excuse for a brutal lynching been a woman's "honor" or alleged violation?

Hell, the excuse for abducting and beating 14-year-old Emmett Till to a pulp, then tying a heavy cotton-gin fan around the boy and dumping him into the Tallahatchie River was because, supposedly, the child whistled at a white man's wife.

I just saw a man use lynching logic under a Facebook post about protesters at the Sumner, Miss., courthouse where a white jury acquitted Till's killers 65 years ago last week. The protesters want the Confederate statue moved from a lawn where it is especially sickening, and they're raising awareness about the ongoing  systemic racism those statues represent—including police and citizen brutality. But this white dude wasn't having it.

"Don't use Emmett Till as your prop, where were you Defending people like him during the Metoo movement," the man posted in a remarkable conflation of what I'm guessing is his anger at both Black Lives Matter and the #MeToo movement. But it got me thinking about the lynching-logic problem—that women (especially white ones) are used as an excuse for horrific violence against Black men. This dates back to times of slavery, of course, where race-mixing was strictly taboo—unless it was between white men and the Black women they raped repeatedly for their own pleasure and to build their future free labor force.

Put bluntly, accusing a Black man of a sexual crime has always been an excuse to kick fully into dehumanization with anything-goes, often in the most dramatic and brutal way possible. This dehumanization is baked into the nation's white DNA  after generations of brainwashing and being told that Black people, especially men, were born more prone to violence. Our job now is to "revive humanization," as Dr. Karla McCullough wrote in the Jackson Free Press, not to continue it as an excuse for ongoing brutality.

In this bullshit cycle of historic and systemic racism we've never fully confronted, that belief leads to all kinds of inequities—from segregation academies (still), to community disinvestment and fleeing to whiter suburbs, to many cops bringing their racism to the job and treating Black communities in ways that research proves can lead to more, not less, violence.

The lynching logic takes over as a dishonest excuse for any behavior: "See, Black people commit more crimes." I just want to bang my head against the wall at the stupidity of this circular and violent logic that keeps the same-old "got-what-he-deserved"  racist cycle of white violence going.

Seeing the vulgarity and savagery of believing that Black people are exempt from the need for due process, trials and actual evidence before they're punished—just like white people get—in no way negates my pain as a sexual-assault survivor who is confident that my (white) rapist will never pay for the hell he caused me for years afterward. But I still don't want some cruel, trigger-happy vigilante, or a police officer, to drag him out of his home and punish him without a trial. I don't want him burned, or hung, or cut up, or shot several times in the back as his kids watch.

I want what the best of the #MeToo movement has brought—awareness of the severity of the problem and evidence against men like Harvey Weinsten, Bill Cosby, Jeffrey Epstein, R. Kelly, Matt Lauer and Kevin Spacey who used their power and fame in unconscionable ways, and repeatedly, credible sources tell us.

I decidedly don't want my so-called honor or pain as a woman used as an excuse to continue the horrific practice of lynching, in one form or another, in a country that has never fully reckoned with that heinous practice, past or present.

Donna Ladd is the co-founder and editor-in-chief of the Jackson Free Press, and now the new nonprofit publication, the Mississippi Free Press. Follow her on Twitter at @donnerkay or email her at [email protected]