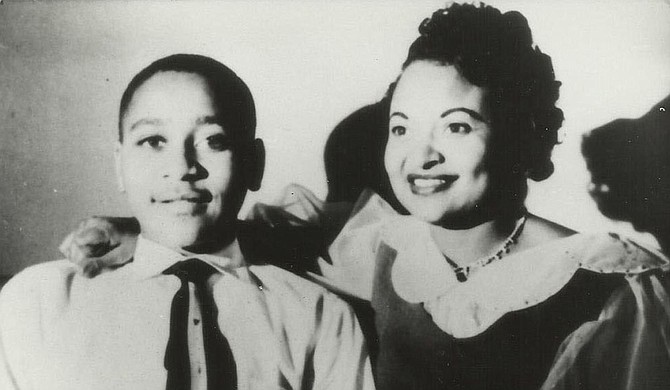 White men kidnapped and brutally murdered Emmett Till (left), pictured with his mother Mamie Mobley-Till, on this day 62 years ago. His lynching and the murderers' acquittal spurred the Civil Rights Movement in the South and nationwide. Photo courtesy Simeon Wright

Sixty-two years ago, white men in the Mississippi Delta brutally murdered Emmett Till in a horrific lynching that is often cited as a catalyst for launching the Civil Rights Movement in the South.

On Aug. 28, 1955, Roy Bryant and J.W. Milam went to Mose Wright's home, looking for Till, after an incident a few days earlier when Till allegedly whistled at Bryant's wife, Carolyn. Till was visiting family for the summer, the boy and his mother lived in Chicago. He would never see his family again, as Bryant and Milam drove him away.

The boy's body was found bloated, with bullet wounds as well as other wounds that indicate he was badly beaten before his attackers tied a cotton gin around his neck and dumped his body in the Tallahatchie River.

Keith Beauchamp, in his research for his 2005 documentary "The Untold Story of Emmett Louis Till," found that Bryant and Milam had stopped at the river and dumped him on their way back to Glendora. An FBI autopsy on the exhumed body in 2004 confirmed that Till died of a gunshot to the head, but he had several other head wounds.

Chicago reporter David Jackson's infamous photo of Till's mangled and disfigured body ran on the Sept. 15 cover of Jet, and Mamie Till-Mobley decided to have an open casket for her son's memorial, cementing Till's death as a public atrocity that fueled the Civil Rights Movement.

The trial against Bryant and Milam for both kidnapping and killing Till kept the lynching in the spotlight, as the public watched an all-white jury let both men walk free, despite convincing evidence they had kidnapped and killed the 14-year-old. Carolyn Bryant lied in court, she later admitted to Timothy B. Tyson, a Duke University research scholar in 2008. Bryant said she had falsely testified that Till had physically and verbally threatened her, the Associated Press reported. Tyson published this information in his book "The Blood of Emmett Till" this year.

Today, Bryant's Grocery store is covered in kudzu and overgrown greenery. The roof is caved in and cavernous. Not far away, a historic marker commemorating the life of Emmett Till stands.

In May, vandals scratched the marker up and then in June, vandals peeled back metal markers on the sign, making it unreadable. The Associated Press reported it cost $500 to fix the vandalized sign. While the marker was repaired, supporters placed a "Black Lives Matter" tag and magnolias in its place.

On July 25, the new marker was rededicated and presented on what would have been Till's 76th birthday, the Associated Press reported.

Community organizers scheduled several events this past weekend to commemorate Till's enduring life and legacy. The "Remembering Emmett Louis Till & Others Black and White Affair" event is set to be held at the Mississippi Art Center in downtown Jackson. More details are available here.