Yes, It Was That Bad | Jackson Free Press | Jackson, MS

Yes, It Was That Bad

When I was a teenager in Philadelphia, Miss., there wasn't a lot for young people to do. On the weekends, we would go "riding around." I would get all dolled up, get together with one or more girlfriends, fill the tank, and we'd cruise.

We first drove in a big circle in the parking lot of the A&J Drive-In (before and after it closed), then about half a mile along Beacon Street, turning left onto Holland Avenue, passing all the mammoth "nice" historic homes and then looping around the Sonic. Then we would retrace our path and start over.

We always hoped to attract the attention of "cute boys" in one or the other parking lots. Sometimes we'd go riding around with them, flirting and maybe necking a little in the back seat, and then come back to our cars. This is what everyone did on the weekends.

Sandy Middleton discusses how rape and sexual assault affects victims and the community in an illuminating interview by JFP Managing Editor Ronni Mott.

One night, on our requisite A&J loop, a couple of guys flagged us down and asked us if we wanted to go to a party. One of them was an older football player, who had won various honorifics and even one with Mr. in front of it. He wasn't my grade, and I had never run in his circles. He was flirting with me--me!

It never occurred to us that we shouldn't crawl into their car to go to the party.

Turns out, the "party" was at Mr. Popular's house south of town. And the four of us were the only ones invited. When you're 16, and live in a town where everyone knows everyone, you don't expect to get hurt.

Inside, he turned on music and pulled me toward him. Meantime, my friend had wandered away with the other guy, and I wasn't sure where they were. The lights were dim. Mr. Popular suddenly turned sweet and started saying nice things about my hair or such: stuff girls like. He kissed me, and I could feel him pulling me toward another room. It was the first moment I started to feel fear.

But I let him pull me in there--a moment I've replayed hundreds of times in the decades since. Why did I go?

In his bedroom, Mr. Popular turned the music up and took me in his arms, tenderly at first. Then, suddenly, everything changed. He threw me back on the bed and climbed on top of me, all in one move. I started saying, "no, no, no," and struggled to push him off.

But he was strong. He planted his left elbow close to my right ear, and suddenly that hand covered my mouth, muffling what was becoming a scream. He kept that hand there, and rather expertly pinned my legs with his as he used his right hand to unzip and jerk my jeans down and unzip his fly.

Then, with his left hand still covering my mouth and with my tears soaking it, Mr. Popular raped me.

It didn't take long, and then he rolled over on his back and let me go. By then, I couldn't say anything, but just lay there and sobbed.

He turned his head to look at me and said, "See, that wasn't so bad, was it?"

Mr. Popular then got up, zipped his jeans and left the room.

I was so shaken that it was hard to stand and pull my jeans up, but I managed. I was overwhelmed with shame and anger--at myself, for allowing this to happen to me. Me.

As soon as I could, I walked out into his parents' living room where he was drinking a beer and avoiding looking at me. Somewhere in the fog, my friend and her new buddy emerged, and we all got into the car. He drove us back to the A&J and dropped us at my car.

My life had changed.

It never occurred me to go to a hospital for a test, and I knew no one would believe me if I reported him. He was the big man on campus; he had "picked me up," I had gone to his house (under false pretense, but still), and I had gone into his bedroom. I don't remember what I was wearing, but I was out on a weekend night, so it was probably at least a touch sexy by Neshoba County standards.

For the next 15 years, I would blame myself for being raped. I drank too much, and I did stupid things. It was hard to learn to trust--especially men--and my self-esteem was only surface, and I over-compensated in ways I'm not proud of now. As a result, it was hard to sustain a good relationship, and I ended up in some really bad ones.

I was caught in the cycle that sexual assault too often creates.

My catharsis came when I moved to New York City and finally managed to dump a perennial cheater, and met a remarkable man who helped me restore my confidence in myself, even though I was far from ready for a good relationship, I realize now. (He is still my friend, and my partner Todd's friend, even though we don't see him often enough.)

At the time, I got involved with a small newspaper, even though I had no real idea how to actually do one. But I had heart.

During my virgin voyage into newspapering, I decided to write about being raped. After I wrote my story in a play-by-play fashion (not unlike this one), I let the male music editor read it.

That simple act started my recovery, especially when the guy read it and cried.

I didn't publish my story, though. I wasn't quite ready, nor have I been for all these years, to tell the story publicly. I sure wasn't going to tell it when my mother was still alive.

I've alluded to it here and there, but it wasn't until this year, when we decided to focus the Chick Ball on sexual assault, that I knew it was my turn to come out, so to speak. 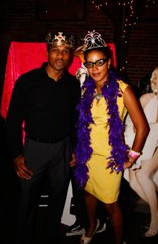 I meet many young women who blame themselves for being assaulted. I meet women and men who excuse men for not being able to control themselves if a woman flirts, dances a certain way or even wears sexy clothes around them. ("Boys will be boys.") And almost everyone I talk to about sexual assault manages to blame the victim, without even knowing it, just as they do with domestic abuse. They ask about her role first: why she/we (a) dressed sexy or (b) went with him or (c) didn't scream loudly enough or whatever other excuse they can find not to ask: "Why does he rape?"

Rape is a crime of violence and power, not of sex or passion. It is time we all talk about it, and often. Let's start here: No means no--no matter what. Men who refuse to take "no" for an answer should go to prison.

My rapist didn't go to jail or prison, and I pray he never raped again.

Even as I know he probably did.

Donna Ladd will host the JFP Chick Ball this weekend to raise funds for a rape-crisis center. Get details at jfpchickball.com.