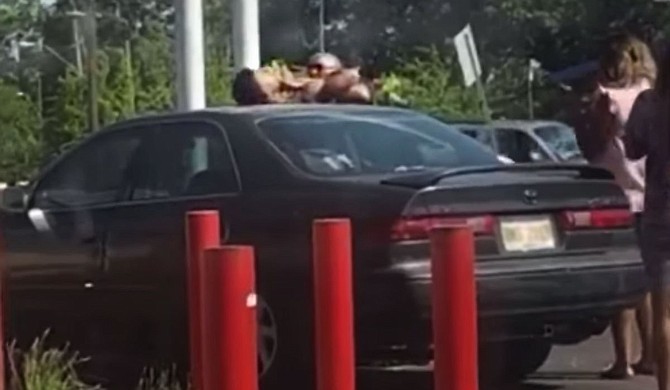 Jackson patrolman Myron Smith is on administrative leave pending an investigation into a May 22 incident where he held a young man backward against a car, possibly by the throat while threatening to do more. Onlookers kept pleading, “he can’t breathe.” Photo courtesy Facebook

A Jackson police officer, captured by video Friday pinning a young man by the neck backward to the top of a car, is on administrative leave pending an Internal Affairs investigation. In the video that started circulating Friday night, the officer is pressing the young man’s neck as he sounds like he is gagging. A young woman wearing a safety mask next to them keeps saying, “he can’t breathe.”

"When the video surfaced, it got to Chief James Davis, and he immediately placed (Smith) on administrative leave and turned it over him to Internal Affairs,” Brown said.

On the video, the officer stood over the young man, very close to his face, bending him backward onto the top of the car, seeming to hold him down by the neck and preventing his movement. More than one camera recorded the incident, while some passersby pleaded for the officer to let him go.

The young man struggled to break off the hold, but was overpowered by the officer who kept shouting at him and making a scene on the road. A parked police car can be seen in the video, possibly belonging to the officer.

"Make me, make me, I say, make me,” the officer, visibly angry, repeatedly said.

The Jackson Free Press viewed a video lasting about two minutes. It showed the woman attempting to push the officer's hands off the young man, with Smith not treating that act kindly. He shouted at her, saying: "Get off me, get off me, I say get off me."

Mayor Chokwe A. Lumumba's office released a statement in response to the incident. He said his administration is focused on engendering a positive relationship between the police and the people of Jackson.

"This administration is clear that we are trying to build an approach to public safety that is about trust, collaboration, and integrity. Any actions that do not reflect those principles have no place in the City of Jackson,” Lumumba said in the statement.