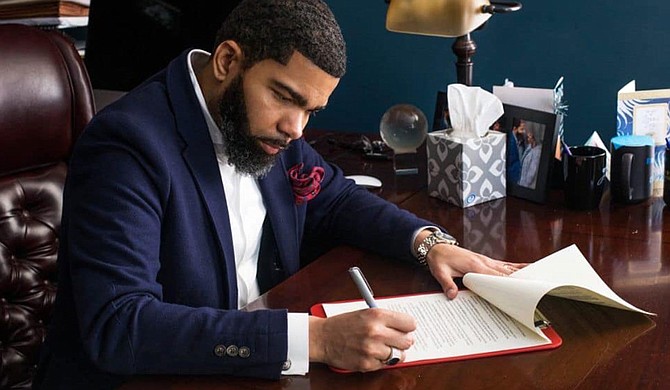 Mayor Chokwe A. Lumumba signed an executive order today prohibiting the Jackson Police Department from using choke-holds, knee-on-neck or any other tactic that restricts breathing in an amendment of its use-of-force policy. He also bans shooting at moving vehicles and requires officers to intervene when another offer violates the updated use-of-force policy.

Much of the order draws from evidence-based practices shown to reduce police violence. 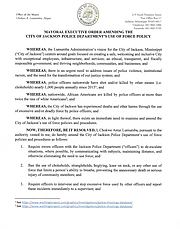 In the order, the mayor acknowledged that Jackson has faced a number of use-of-force problems since he became mayor in July 2017, saying “the City of Jackson has experienced deaths and other harms through the use of excessive and/or deadly force by police officers” and, thus, faces “an immediate need to examine and amend the City of Jackson’s use of force policies and procedures.”

As recently as May 22, JPD Officer Myron Smith was captured on video appearing to choke a young black man, bending him backward over the top of a car and angrily repeating, "Make me, make me, I say, make me!” The officer was placed on administrative lead pending an investigation.

Then, on June 9, in the wake of a massive protest in Jackson against police brutality, attorney Dennis Sweet III appeared with five families who have either lost family members to JPD violence or been abused by police themselves to raise awareness about over-policing in the capital city.

The new executive order says that officers will “de-escalate situations, where possible, by communicating with subjects, maintaining distance, and otherwise eliminating the need to use force.” It also attempts to break down what is often called the “blue wall of silence” among police officers in the U.S., requiring officers “to intervene and stop excessive force used by other officers and report these incidents immediately to a supervisor.”

Lumumba’s order further seeks to end a dangerous practice among many police officers—shooting at moving vehicles, often causing them to go out of control and kill the driver or even innocent bystanders. The mayor calls this habit “a particularly dangerous and ineffective tactic.”

The order promises to create a “Use of Force Continuum” to limit the kind of force that can be used depending on how the suspect is resisting or acting, and to require all officers to “exhaust all other reasonable means before resorting to deadly force.” The mayor is also requiring officers to issue verbal warnings before firing at a person unless extenuating circumstances make it impossible.

Lumumba is demanding comprehensive reporting where officers must report each time they use or threaten to use force.

The order does not make clear the penalties for violating the mayor’s new order.

About a year and a half into his term and after this newspaper’s sustained team reporting and editorials in response to a spate of officer-involved deaths and shootings, the mayor finally agreed to begin publicly naming police officers who shoot or kill people in Jackson, sharing the first list with the Jackson Free Press in January 2019, a year and a half after he took office. Historically, the names of these officers were typically never released, which violated the national standard of releasing the officer's name within 72 hours in the majority of circumstances.