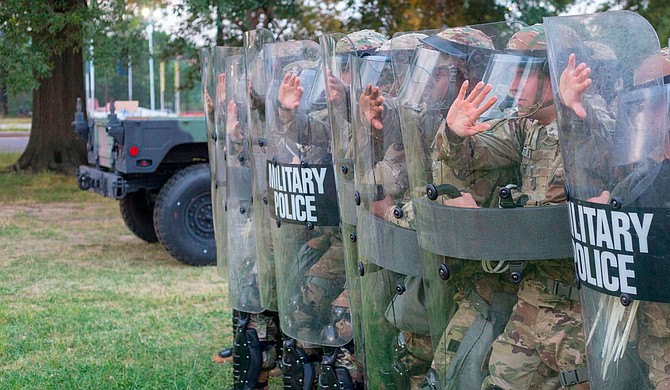 The State of Mississippi has sent members of the Mississippi National Guard to Washington, D.C., amid the heavy protest actions taking place around the White House and the nation.

Reeves was not clear on whether he would also have National Guard troops on hand for a protest planned in Jackson on Saturday, June 6. “They will operate under the command of the governor should I choose to activate them and should I choose to do so they will be here in such a way to protect the protesters who are doing the right thing and to provide backup in the event that's necessary,” he responded.

Reeves has alternately praised protesters and organizers in Mississippi for being overwhelmingly peaceful and law-abiding, while threatening to use “the full force of our state” if he deems it necessary.

Today, the governor tweeted that the Mississippi Emergency Management Agency would provide masks to protesters at tomorrow’s action in downtown Jackson to help prevent the spread of COVID-19.

Mississippi Rep. Jarvis Dortch, D-Jackson, pleaded for the governor not to do so. “They have been accepting donations and masks for days. Please have (Mississippi Emergency Management Agency) provide the masks to the organizers. Please. Don’t do this,” Dortch tweeted.

Jackson Mayor Chokwe A. Lumumba offered his support to the protests last night, releasing a statement in support of the nationwide protests and those coming to the capital city today and tomorrow.

“I stand in solidarity with the Black Lives Matter movement,” Lumumba’s statement read, “and all of those engaging in civil disobedience against police brutality and the abuse of black bodies across the country and around the world. We remain focused on building a police department based on trust, integrity, and community collaboration. We remain dedicated to justice.”

In the capital city, Lumumba has faced criticism for rough and militaristic policing and allowing the Jackson Police Department to be part of the federal “Project Eject” policing strategy, as well as problems with transparency for not identifying officers who shot and killed people during his first year in office, eventually leading to the release of their names and internal-affairs records. In recent weeks, JPD placed Officer Myron Smith on leave pending an Internal Affairs investigation after a video captured him seeming to choke a young man, while threatening him to “Make me, make me, I say, make me.”