Mississippi Governor: Protests Good, But No Place for 'Agitators' 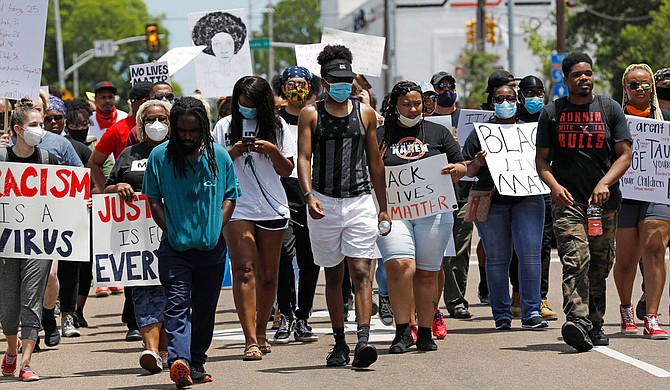 Protesters marched in Mississippi's capital city on Monday, with some stopping to lie on the ground outside Jackson's main police station to remember George Floyd, a black man who died after a Minneapolis police officer pressed his knee into Floyd's neck for several minutes. Photo by Rogelio V. Solis via AP

JACKSON, Miss. (AP) — Protesters marched in Mississippi's capital city on Monday, with some stopping to lie on the ground outside Jackson's main police station to remember George Floyd, a black man who died after a Minneapolis police officer pressed his knee into Floyd's neck for several minutes.

Other protests took place during the weekend in Oxford, Biloxi, Jackson and other parts of Mississippi. There were no reports of violence.

Mississippi Republican Gov. Tate Reeves said Monday that he respects people's First Amendment right to protest. He said he differentiates between those who are protesting to air grievances and “anarchists and agitators from other parts of the country who seem committed to violence."

He said any efforts to cause violence “will be overwhelmed.”

“I am not threatening,” Reeves said. "I am promising that the full force of our state will be ready and willing to defend our communities.”

Reeves acknowledged hearing protesters outside the Governor's Mansion during the weekend.

“I heard their message,” Reeves said. “I watched in a manner that was forceful without descending into violence.”

The Jackson suburb of Pearl said on social media Monday that it was temporarily closing an outlet mall because of the possibility of protests and warned of the continuing coronavirus pandemic.

In Oxford on Monday, a judge set bond for a man charged with defacing a Confederate monument at the University of Mississippi during nationwide protests against police brutality. A judge ruled that Zachary Borenstein, 38, could be released on $5,000 bail, The Oxford Eagle reported.

Borenstein is a graduate of the university. He was arrested Saturday after the rebel memorial was damaged with spray paint that said “spiritual genocide” and red hand prints. He faces a felony charge of defacing public property.

Critics contend the memorial near the main administrative building sends a signal that the university glorifies the Confederacy and glosses over the South’s history of slavery. Confederate memorials and monuments have been targeted elsewhere during protests against police killings. Installed in 1906 during a period when Confederate descendants and sympathizers were erecting monuments to the “lost cause” of the South, the statue was a rallying point in 1962 for people who rioted to oppose the university’s court-ordered integration.

Arielle Hudson, the university’s first African American woman Rhodes Scholar, created a fund to cover’s Borenstein’s bail money. She was one of the main leaders of a movement to relocate the statue from its current location. The state College Board has delayed acting on recommendations that the statue be moved to a secluded part of campus, where some Civil War soldiers are buried.

University of Mississippi Chancellor Glenn Boyce issued a statement after Borenstein's arrest condemning racism and saying he is committed to moving the statue, The Daily Mississippian reported.

“That monument has divided this campus, and the process of its removal from the Circle is one I am committed to seeing through to completion," Boyce said. "There is more to do, but this needs to happen.”