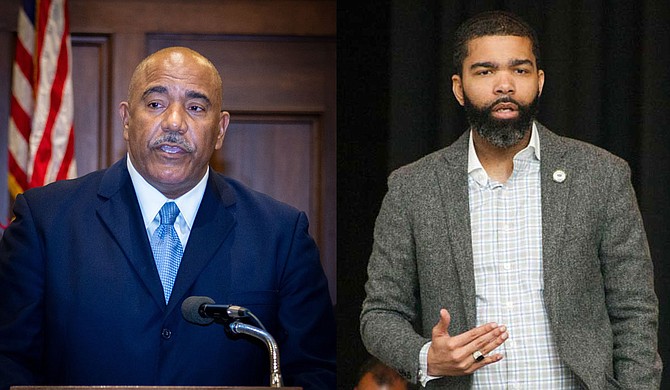 Mayor Chokwe Lumumba’s release of a new curfew has some startling provisions. Suggesting he is against the governor’s hasty reopening of the economy and in response to the Covid-19 virus, while jabbering about “science and data,” the mayor says “we” don’t have the luxury of “a wait-and-see approach.”

So he proposes a curfew at night when there is no problem with social distancing. Overwhelmingly, people sleep at night. What is the mayor thinking?

He says only essential workers like first responders, physicians, medical patients and utility-repair workers are permitted to drive at night. State and local government employees providing services have freedom of movement between 11 p.m. and 5 a.m. Is he worried about traffic jams obstructing their movement?

Mayor Lumumba’s government is requiring that all essential workers be provided with special verification and documentation that they can hand to police upon request to prove their need to be out at night. The mayor says any variance of this order is only allowed on his authority.

They Can Only Conceive of the Police State in White Face

Many like to chatter about “a New Jim Crow.” I insist we live under an affirmative-action empire and an ethnically plural police state. Those familiar with Jim Crow and Apartheid in South Africa or other African territories understand what this curfew means.

The police will create checkpoints and stop citizens and ask for their papers. They will ask, “What right do you have to be walking or driving here?” They will ask for verification from the citizen’s employer.

While traveling during Jim Crow and Apartheid, a sharecropper or domestic servant would be busted upside the head, molested and maimed. Then, the police would call the appropriate plantation household and ask if they were their servants, only to release them, all tattered and scarred—if they had their papers in order.

In Africa, under the pass-law system instituted during white rule, a black person would be told they were subverting the law when found traveling at certain times and in certain places. The old way of doing things under white rule never hassled or pulled white folks aside, obstructing their freedom of movement. There was no curfew for white folks moving around day or night. It was a means of subordinating and degrading black toilers and the unemployed to get them to accept their wretched social conditions.

Is Mayor Lumumba’s government setting up a curfew and checkpoints to police the white people of Jackson? Are the disproportionately poor black folks of Jackson “essential workers” as defined here? Many do not have consistent wage-earning work at all, though many of them care for children, and this is serious labor under scarcity of food and other resources.

The mayor is preparing the conditions for a catastrophe. He is paving the way for police-state confrontations with ordinary black people at militarized checkpoints.

Many do not think so because they can only conceive of the police state in white face. They only understand the police randomly stopping and frisking and asking for your papers from your employer if the police are white or white-led. Mayor Lumumba is collaborating with the governor, whom many blacks perceive as a white racist, and therefore cannot imagine such an alliance. They pretend to criticize each other to mobilize their own dependent constituencies.

Recently, a JPD officer was recorded choking a young black male while he repeatedly said he could not breathe. As a young woman and the boy pleaded with the officer to stop, the officer tightened his grip, and responded to the pleas by yelling “make me!” repeatedly. This is the type of gestapo-like tactic that led to the recent choking death of George Floyd in Minneapolis, Minn., and Eric Garner in Staten Island, N.Y., in 2014.

But this is not Minneapolis or New York City; this is supposed to be the most radical city on the planet led by the self-proclaimed “revolutionary” mayor who routinely gives officers paid vacations after they abuse and kill residents.

Where were the credible messengers to “de-escalate” this instance of police state violence? What’s next for Jackson? Police snipers on the roof of buildings like in Minneapolis?

Mayor Lumumba’s Jackson government has recently announced a collaboration with the black led Hinds County Sheriff’s Department and the city of Byram on the creation of a SWAT team. SWAT stands for “special weapons and tactics.”

Recently, the mayor used the trope of “children” to advocate the disarming of the black community. But his relative silence regarding allegations that an JPD officer sexually exploited a minor speaks volumes regarding his concern for children. Now the mayor publicly calls for the militarization of the police.

Lumumba is not the only leading black official in Hinds County who is making a clarion call for the militarization of the police state against poor and black toilers. The predominantly black county board of supervisors voted unanimously to militarize the police. District 2 Supervisor David Archie has led the charge in advocating for the criminalization and terrorization of poor black people. To justify placing poor black people under siege, he used the trope of the elderly being afraid to come out on their porches.

Individuals like Lumumba and Archie can always employ these clichés of protecting children and the elderly to justify repressing black commoners. However, they never mention innocent victims of these militarized police tactics.

Aiyana Jones, a 7-year-old girl in Detroit and, more recently, Breonna Taylor, a 26-year-old Emergency Medical Technician in Louisville, Ky., were both killed during militarized SWAT drug raids. Those who claim to protect “our people” only see the black lives that they can leverage to justify their dastardly acts as the ones that matter.

“Special” weapons are not simply handguns but long-range rifles for snipers and machine guns. “Special” tactics are for waging war against a resistant population. SWAT teams are used most often against an insurgent mass uprising. They often wear helmets and shields. Beating people with clubs in street combat is only the beginning.

Is Mayor Lumumba proposing to beat white folks with clubs, use snipers and machine guns against white folks in a city that is 86% black?

He blurs seamlessly the occasion of Covid-19, and the premise of crime, gangs and drugs, to militarize the police force. Yet he knows that COVID-19 disproportionately affects poor black folks.

The next development in police brutality and murder in Jackson will be misrepresented like all the rest as an unfortunate isolated incident that needs to be investigated. But we have every opportunity to examine the militarization of the police, and the reasons of state, before the social explosion happens. We don’t examine this like we should.

This has something to do with how we misunderstand historical development in post-civil rights America. We do not live in a period after institutional racism. We live in an era where black rulers most efficiently administer the police state.

We should expect this from those who don’t believe “black power” means power to the common people even after the black political class has ascended to government posts. And yet Jackson is not preparing to “swat” white folks.

We should not wish for anybody to be assaulted or murdered in the name of the public good or welfare. But the racial disparity nobody wants to talk about is how ordinary black folks are more efficiently conquered, murdered and subject to mass incarceration by police-state regimes that look like them. I know some don’t like when I speak about this. But it is the truth.

Those who love people more than property don’t mind me saying so.