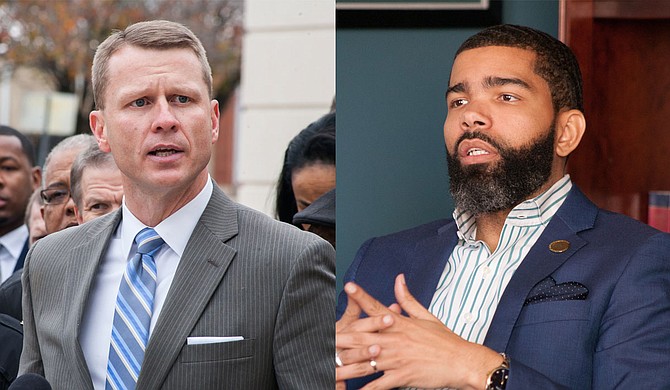 Two days before Christmas, U. S. Attorney Mike Hurst held a press conference to gloat about dozens of arrests made in black, poor and working-class communities in Jackson by federal and local law enforcement agencies, including the Jackson Police Department, under the Department of Justice program called Project Guardian. In addition to his celebrating the terrorization and criminalization of black communities by indiscriminate militarized force, Hurst took liberties to lambast Jackson's political leadership. He paternalistically chided Jackson's black political class about how it should take more seriously its problem of violent crime.

Was Attorney Hurst's chiding meant to amuse royalty? Was it a show to make it appear that those blacks who rule above society are not really in charge or partners in the perennial slaughter and don't, in fact, collaborate with him? Was he doing a favor to the black political class to make the black masses feel that he was insulting all black folks as a race so we might rush to defend this politically bankrupt and traitorous lot and its authoritarian and hierarchical rule over us?

Before rushing to volunteer to be Jackson's political classes' attack dog against racist insult, we should be mindful of Zora Neale Hurston's oft reminder: "all my skin folks ain't my kinfolk."

Hurst's bombastic press conference comes as no surprise. Such political grandstanding and self-aggrandizement is a hallmark of right-wing politicians of his ilk who want to assure their racist and pro-capitalist base that they are keeping black people in their place and under control. In fact, Hurst regularly tweets and releases press releases about how the federal government is cracking down on violent (read black) criminals in Jackson where its political class is too soft and impotent to keep things in order—again more mystification.

Some people have convinced others that electing more black judges, mayors and law-enforcement officials to rule over the masses will result in a transformation of the conditions of the most marginalized and oppressed in society. They say the criminal-justice system is broken and needs to be reformed in order to produce justice and public safety. Those who elect such rulers place faith in them to reform a system that is fundamentally flawed, not just broken, in the name of "black power." Should we be misdirected into encouraging so-called black leaders to demonstrate their merits by degrading the black multitudes some more?

This feeling of black empowerment among common people is little more than a feeble attempt to live vicariously through these rulers. After more than five decades of electing black elected officials to rule above society, it should be evident that the rise of the black political class coincides with the ongoing suffering, exploitation and death of the black masses.

In many locales, including Jackson, the black political class directs the police state that murders black people. It serves up black labor to the highest bidder for the purposes of capitalist exploitation. As if this wasn't bad enough, these same black politicians, who rightfully condemn racism, turn around and openly collaborate with white politicians who advance racist policies in the name of law, order and public safety.

Too often, black people are preoccupied with the activity of white racist elements when those who rule above society in their particular localities are black. These leading blacks have as much, if not more, disdain and resentment for the toiling black populace. They view us as feeble-minded, unrefined and dangerous just as their white counterparts do, notwithstanding their loud declarations about black self-determination.

Nonetheless, the white supremacist who has traded in his pointy hat and sheet for a tailored business suit deserves and should receive all of the ire that the black masses can muster. However, for the past two decades, the political leadership in the city of Jackson has been black. The leadership in Hinds County has also become increasingly blacker. However, as the hue of the leadership has darkened, black people continue to languish at the bottom of every social indicator. Conveniently, that fact is never included in the "racial disparities" discourse. An appropriate question for black voters is: Is black political representation merely symbolic?

It was not Mike Hurst who voted unanimously last January to renew a partnership with the FBI to form the Jackson Safe Street Task Force that has unleashed the full force of the police state onto the predominantly black populace of Jackson. It was the overwhelmingly black city council who voted to do so.

Mike Hurst didn't twist the "radical" black mayor's arm and force him to acquiesce to the right wing's tough-on-crime initiatives of Project Empowering Jackson Expel Crime Together (Project EJECT) and Project Guardian that emanate from Donald Trump's Department of Justice. The "radical mayor" wraps himself in the heritage of the Black Power movement but, in fact, governs in coalition with those who terrorize black people, including the FBI, whose COINTELPRO program attacked his New Afrikan ancestors in Jackson.

Will those who gather alongside the mayor for Kwanzaa celebrations in dashikis be silent about this betrayal?

Collaborating with the 'Forces of Mutilation'

Jackson's black and white members of the political class feign opposition to racism and white supremacy. That means we should maintain our charming southern manners, while collaborating with these forces of mutilation, in the name of stopping violent crime when history shows that such police occupation, surveillance and terrorism does not decrease crime. It only aids in displacing working-class black people from communities that have been targeted for gentrification by white and black developers.

Such policing strategies perpetuate the racist myth that poor and working-class black communities are inherently violent and criminal, thus increasing the likelihood that black people will be wrongfully accused of crimes they did not commit. The odds of innocent poor and working-class black people being victims of police-state murder and brutality exponentially increase in the face of a militarized police force trained to view the black community as combatants.

Jackson's elected officials' collaboration with the federal government cannot be described as anything other than a betrayal of the black working class and poor people. This collusion proves not only that Jackson's political class is unable to solve the problems that besets its residents, but also that they are willing to offer up the most marginalized to give the illusion that they are employing sustainable and effective strategies to do so.

The only way that the problems that face the masses of Jackson will be solved is if the common people solve them through direct self-government. This includes fighting crime and stopping police misconduct through self-organization without collaboration with fakers. We must eschew elite representative forms of government where individuals see power and authority above society only for themselves despite occasional populist speeches and pretending their renewal of the old soft shoe is in harmony with prideful heritage.

Adofo Minka is an attorney who lives in Jackson.