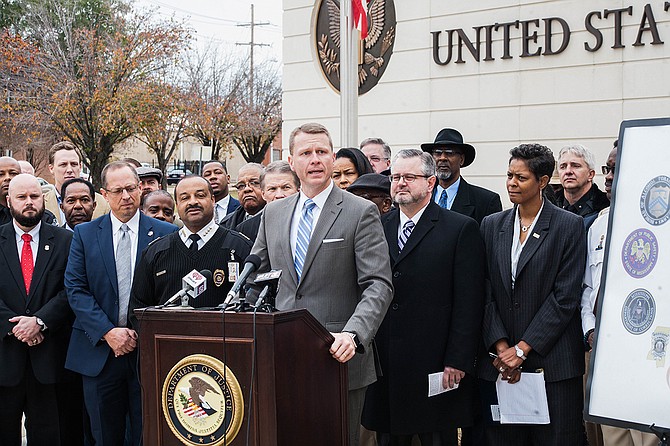 U.S. Attorney Mike Hurst announced Project EJECT (Empower Jackson Expel Crime Together) on Dec. 7, 2017, with then-Jackson Police Chief to his right and Christopher Freeze, Special Agent in Charge of the FBI in Jackson, to his left. Photo by Stephen Wilson.

U.S. Attorney Mike Hurst has launched a propaganda offensive to justify the criminalization of Jackson’s poorest and most vulnerable communities through its racist and elitist Project Empowering Jackson Expelling Crime Together. Hurst and other “law enforcement partners,” including the City of Jackson, are hosting town hall meetings specifically tailored to foster community support and trust. The major premise of the project is that it will stem the tide of violent crime in Jackson by arresting individuals accused of violent crimes, holding them without bail, and if the U.S. government secures a conviction, sending those convicted outside the State of Mississippi and away from whatever support networks they would have.

On Aug. 9, 2018, I had the displeasure of being present at one Hurst’s town hall meetings at the Greater Bethlehem Temple Apostolic Faith Church. A number of federal and local law enforcement officials were present, including JPD interim police Chief James Davis. In fact, the majority of persons present were law-enforcement officials, with a few community members sprinkled in.

Based on Hurst’s presentation, if someone unfamiliar with Jackson was in the room, they might think that the city is the wild, wild west. Law enforcement pushed a false narrative of people not being able to sit on their porches in peace. I live in the heart of west Jackson, and I see elders sitting on their porches, children riding their bikes and families taking walks every day. I am unsure where Hurst is getting his information from, but it is sensationalized and narrowly framed to make individuals feel as if they are under siege and in imminent danger, when that is far from the truth.

EJECT does not address the root cause of crime and violence in Jackson—that which is found in a social system that produces greed, competition and exploitation. Men like Hurst live in an alternate universe where the only violence and crime they see is perpetuated by black and poor people. Nonetheless, systematically miseducating children is a form of psychic violence. Subjecting people to poverty and economic exploitation is economic violence. Allowing developments like the One Lake Project, which will do untold harm to the environment, to proceed is ecological violence. Denying people basic human needs such as health care and housing is violence. The structural violence of this society begets street-level violence. To address that violence without addressing that which is inherent in our social, political and economic systems is hypocritical. Law enforcement and elected officials that lecture poor people about violence while doing nothing to eradicate the injustices are hypocrites.

If Hurst and other law-enforcement officials are sincere about helping curb violence in Jackson, they should take the millions of dollars going into projects like EJECT and invest them in people. They should invest them into mental-health services and drug rehabilitation, and into upending an economy that exploits the labor of people and denies them control over the means of production. If the U.S. Government can afford to dump $700 billion into its war budget, it can certainly afford to invest in people.

The U.S. incarcerates more people than any other country in the world, with 2.3 million people behind bars and counting, prompting famed journalist, author and political prisoner Mumia Abu Jamal to appropriately describe the U.S. as a prison house of nations. If incarcerating more than two million people, the majority of whom are violent offenders, has not significantly curbed violence in this country, it is clear that Hurst’s strategy to combat violence and criminality in the capital city is misguided, flawed and is a failed strategy on arrival. Jacksonians need to reject EJECT.

Adofo Minka is a defense attorney in Jackson and a regular JFP columnist. Read more about Project Eject at jfp.ms/projecteject.