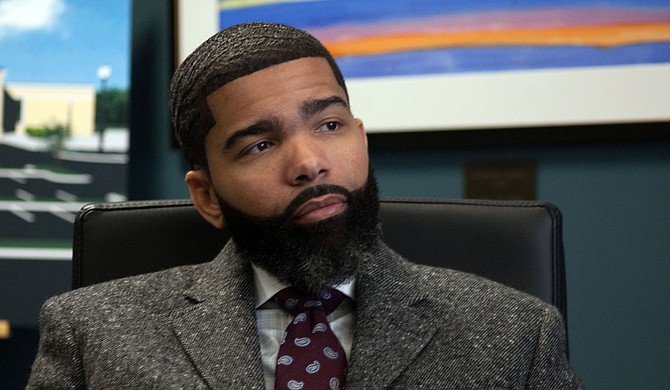 Columnist Adofo Minka argues that Mayor Chokwe A. Lumumba's allegations of corruption by black subcontractors is hypocritical based on his own administration's actions. Lumumba is pictured. Photo by Stephen Wilson

In his third State of the City Address delivered on Oct. 24, 2019, Mayor Chokwe Antar Lumumba vowed that he would fight corruption within government. The mayor reminded listeners that he ran on an "anti-corruption platform." He sued those who "plundered," an allusion to black subcontractors who the mayor claimed installed water meters that do not properly bill customers for their water usage under the Siemens contract.

Recently, controversy has swirled around what Mayor Lumumba has deemed an "honest mistake" that resulted in the city paying Expert Solutions, LLC, a company owned by long-time ally of the Lumumba family, Akil Bakari, over $50,000 more than the Jackson City Council approved. Does the mayor's crusade against corruption extend to his closest allies to whom he now awards city contracts?

It is impossible to separate what is called corruption from ethnic and patronage politics. Patronage is the reward of contracts, administrative appointments or jobs in exchange for loyalty in the form of campaign donations or other support for an elected official. Ethnic patronage is when a politician awards such favors under the guise of ethnic empowerment. Corruption is deemed illegal and immoral. Most assume that ethnic patronage is normative under capitalism and the state whether managed by black elected officials or not.

Government produces little or no goods and services, and contracts out to different firms to fulfill various tasks. This, in theory, is supposed to be done fairly at a competitive price, but also with an awareness of racial and gender disparities in who owns the firms they do business. In practice, stuffing politicians' coffers with donations and pledging fealty are the only standards that often matter.

One should easily be able to imagine that with a history of institutional racism and sexism, black-owned firms that can provide the goods or services to government should have opportunities to do so. These might be termed responsible business practices. However, there is nothing decent about those who control a disproportionate amount of wealth, in comparison to the majority in their community, pursuing more. In a decadent hierarchical society this is nothing strange. Nonetheless, when the yardstick used is racial justice, equal justice or as Mayor Lumumba likes to say, "human rights for human beings," it is laughable.

Politicians often make false promises while campaigning. Often these include improvements in health care, housing or education. They make sympathetic appeals about labor rights or abusive policing practices. Politicians mobilize communities around the vote only to abandon the masses for an entirely different social class of people. When black folks do this, they are aware that African Americans are among the most historically oppressed and economically exploited.

Perhaps certain white racist politicians in coded ways promise opportunity only to "Christians" and "respectable citizens." When applied to blacks, this duplicitous method promises "black power" to the working class, the unemployed, those in prison and the black capitalist. Nations are a hierarchy of social classes. The pretense that there is "a black nation" is no different. Such a "nation" or "republic" proposes rulers to the servile.

The mayor says his administration's "transparency" about its failure to specify an end date on a contract awarded to Bakari's business is being "weaponized" against his reputation. If a contract has no end date, does that not place a contractor permanently on the public budget? If there is a delay in "self-reporting" is not one complicit?

It has been reported that Bakari, the beneficiary of the contract, has served on the transition teams of both Mayor Lumumbas. However, what has not been reported is that Bakari also served as the coordinator for the Malcolm X Grassroots Movement's (MXGM) Mississippi chapter for decades. This is the same organization that the current Mayor Lumumba proclaims himself a member on the City of Jackson's website. Bakari is also a long-time member of the New Afrikan Peoples Organization (NAPO), the parent organization of MXGM of which the elder Lumumba was chairman until his untimely death in 2014.

Given the full context of Bakari's relations, it is no wonder Lumumba took such umbrage and characterized questions about the contract that resulted in Bakari's overcompensation as attempts to score "political points."

In a press conference, Mayor Lumumba attempted to ameliorate this mess by stating that if he steered the contract to Bakari, he wouldn't support legal action against Bakari's company. This sounds good in theory. However, we know that many times litigation is shrouded in secrecy, and legal matters are often settled outside court without the public scrutiny that comes with a trial.

Mayor Lumumba's defensive posture is akin to roaches scattering when exposed to the light. In a press release, Lumumba attempted to minimize his connection to Bakari by claiming that Bakari had done work for the City prior to his administration.

Mayor Lumumba's attempt to turn attention to the motives of others is an attempt to deflect from an unacceptable oversight of one of his top administrators who is paid over $100,000 per year to do a job that in this instance he failed miserably. Unless he did not fail. We don't know for sure.

The fact is Lumumba came to power by campaigning with a freedom movement pretense. Its brand set standards: the mayor was a revolutionary and was working for Jackson to be the most radical city in the U.S. However, he ensures that business as usual continues.

Lumumba talks of running on an anti-corruption platform, but what happened to the promises of a solidarity economy and a popular assembly whose members function as "co-mayors?" They have been discarded for collaboration with every sector of both the Democrats and Republicans. Very few have attempted to educate people to clarify that something is wrong. Not wrong by the standards of white supremacy, capitalism and the state. By those measures, Lumumba is likely doing nothing wrong.

Mayor Lumumba dares his audience to search for the profound content of his vision besides the matter that he is a young African governing in Mississippi. He depends on observers having a perspective that they are fighting the white racial state, 50 years into black power in post-civil rights America.

Without question, institutional racism still exists, but it is most efficiently administered by black elected officials, police chiefs, corrections commissioners and military that uphold police state murder, incarceration and empire in the name of black empowerment.

Everyday people have tremendous capacities to build a self-directed liberating society. This includes a cooperative federation of self-governing producers. We can decide the terms we produce and govern, as well as the value we place on ourselves, not as degraded wage earners, but as human beings. But we can only do that if we discard the idea that politics is a spectator sport and that we should participate through periodic elections. If we fail to implement direct self-government, we will continue to witness ethnic patronage politics for the friends of those in power and suffering and death for the black multitudes.