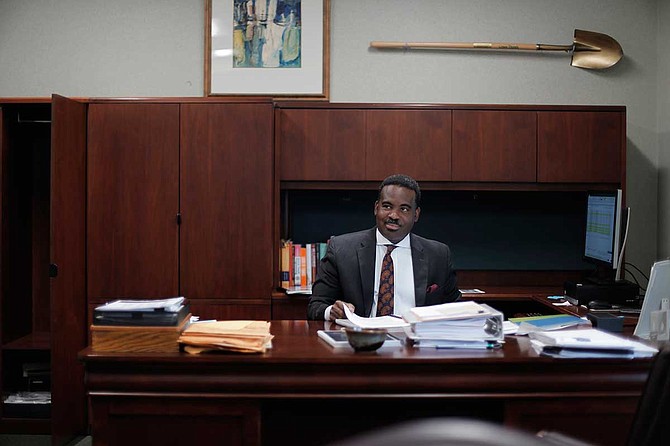 Jackson City Council voted to censure Dr. Robert Blaine, the City’s chief administrative officer, for signing off on contractor payments for work carried out beyond the scope of an agreement that the council had approved in 2018. Photo by Imani Khayyam

The Jackson City Council voted unanimously Tuesday to censure Chief Administrative Officer Robert Blaine following an administrative error in a City contract. The mistake resulted in the City of Jackson paying a company $100,000 for work that was supposed to have cost $48,000. In addition to lodging the formal criticism against Blaine, which falls one step short of a vote of no confidence, the council voted to pursue litigation against the contractor, Expert Professional Solutions LLC, both to recover city funds and to investigate the work it carried out.

Members cast their votes during executive session at Tuesday's meeting. Ward 2 Councilman Melvin Priester Jr. asked for the votes to be read aloud during the open portion of the session.

Ward 6 Councilman Aaron Banks lauded the City's legal department, which is investigating the error, "for the work that they've done in representing both branches of this government, and looking out for the good of this city."

After praising the City's legal team, Mayor Lumumba voiced his support of Blaine. "I do want to make a statement that while I feel there are errors that need to be corrected..., I wholeheartedly endorse the work of my CAO," Lumumba said. "All in all, he has been worth his weight in gold to the City, and I just want him to know how much I appreciate the effort and the sacrifice he makes on our behalf each and every day."

An ongoing issue with the municipal water-billing system, dating back to botched work under the Siemens contract beginning in 2013, resulted in a billing system that regularly crashed. Because the billing system lived on faulty physical servers, the City had been unable to bill customers for water-sewer service. Expert Professional Solutions, headed by Akil Bakari—who also goes by Willie Webster and W. Akil Webster, Priester confirmed—was one of several companies that the City contracted to remedy the problem, which included moving the billing system to a secure, cloud-based system.

On Sept. 11, 2018, the council voted to approve the contract with Expert Professional Solutions. Minutes from that meeting show that "the term of the agreement for will be for a period of six (6) months beginning upon the date of execution of the agreement for a fee in the amount of $48,000.00."

However, the City continued to pay Expert Professional Solutions for work it performed beyond the six-month scope of the contract, which began Oct. 4, 2018.

Blaine signed off on the invoices before they were sent to city council, which votes to approve or reject vendor payments.

During a press conference Wednesday, the mayor acknowledged the error and explained the circumstances that led to it. He stated that the contract did not have an end date in it, nor did it specify an exact amount that the City was to pay out to Expert Solutions LLC. "It just gave a rate to be paid out, per the hours' work," Lumumba said.

The Jackson Free Press obtained a copy of the contract today. The contract does not match the order the city council voted on in 2018, which states the City of Jackson was to pay Expert Professional Solutions a flat rate of $48,000 over a six-month agreement period. The contract makes no reference to a specific monetary amount and states instead that the City of Jackson must "pay all undisputed portions of the fees as set forth in the applicable Statement of Work."

By press time, the Jackson Free Press had not obtained a copy of the Statement of Work.

Priester noted that other contracts relating to the water-billing system fix had been amended. The City should have amended this contract or issued a new one, he said, but it didn't—an error that the City characterizes as an honest oversight.

During yesterday's press conference, the mayor stood by Blaine and emphasized that Blaine and his administration had self-reported the mistake to both the city attorney and city council.

He also warned against efforts to characterize what he called an honest error as an intentional, deceptive move. "If this was based on a relationship or steering some type of legal contract, I don't think anyone steers a contract and self-reports an error. And then after self-reporting an error, they support legal action to take against the company," the mayor said.

Banks pushed back on the mayor's comments about him. "It seems like it's more image recovery, and trying to call me on things, than really looking at the seriousness of how taxpayers' dollars are being spent," Banks told WAPT reporters yesterday of the City's response to the error. "I take the good faith and trust that the administration would do the proper procedures and process to make sure that there are no mistakes when it comes to overspending $52,000 of the taxpayers' money," he added.

Priester said he believes the error was "a good-faith mistake" that occurred as the City was in "the heat of a major crisis."

The secretary of state's website lists "Willie Webster" as an officer/director of Expert Professional Solutions LLC. The Jackson Free Press called the company and asked to speak with W. Akil Webster or Willie Webster, who replied "speaking." We asked Webster if he was interested in discussing the matter. "No ma'am, I'm not," he said before hanging up.

"We've put a lot of trust in certain people, and that's what the mayor has asked us to do," Priester said of Blaine, adding that "when we have a situation where there is a mistake by those people, because we have put so much faith in them, we have to respond more harshly."

Priester reiterated that the council must respond to such errors with appropriate steps and ensure that there are consequences when city employees do not follow internal protocols. In addition to an internal investigation, State Auditor Shad White's office will also look into the error.

But Priester urged the press and the public to consider the error within the context of larger systemic issues relating to the City's internal systems, problems he believes ultimately led to such an error.

"One of the things that frustrates me the most about this, and why I'm gutted that I have to call Dr. Blaine on this, is Dr. Blaine is the one who is doing the work to prevent problems like this from happening in the future," Priester said. He added that "the reason we get into problems like this is because the City of Jackson is so reliant on paper-based processes. And we are going to have problems like this because all of this stuff should be automated."

In addition to a primarily paper-based system, the City also relies on multiple systems of tracking finances that do not communicate with one another, Priester explained. For example, Jackson's existing digital financial system, Cayenta, is not connected to its budgeting operations, which makes it difficult to understand the City's finances at any given moment.

"All these things should be interconnected, so it's not a department head with a million other things trying to sign off and find the contract and cross reference this, look at that," Priester said. "All the stuff that we're trying to do, about upgrading our computers, and changing our accounting system and software, and putting in new policies and procedures—all of this is designed to fix and prevent the exact situation we find ourselves looking at this morning."

Under the leadership of Blaine, the City had been working for over a year to overhaul its business systems and transition to a single, integrated web-based system called MUNIS, which would enable the City to track all of its financial transactions in real time.

In December, Blaine sent a letter to City staff to announce upcoming training sessions for how to use the MUNIS system, which encompasses business functions such as capital assets, cash management, inventory, general billing processes, requisition, real-time general-ledger functions and more. Last month, City employees began training in how to use MUNIS, with the intention of going live soon.

"In many ways, it's really frustrating to have to do these steps right now to correct this problem because it's putting a mark on the main person who is trying to identify and correct the systemic issues that lead to problems like this," Priester said.

"But until we get the new system up, the only thing we can do is rely on the existing system. And the existing system requires people to sign off on certain things, and when they sign off on something without having been sure and correct in what they're signing off on, you've got to hold people accountable," he added.