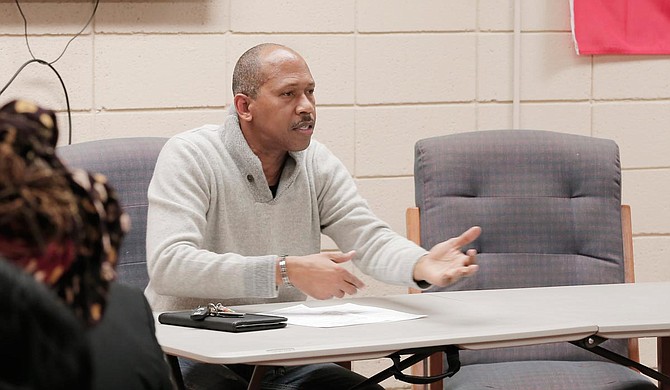 Chief Administrative Officer Robert Blaine drew a unanimous censure from the Jackson City Council following an administrative error in a City contract with a prominent backer of Mayor Chokwe A. Lumumba.

The City paid Expert Professional Solutions LLC $100,000 for work on the flawed water-billing system that was supposed to have cost $48,000. Akil Bakari—who also goes by Willie Webster and W. Akil Webster—owns the business.

In addition to lodging the formal criticism against Blaine, which falls one step short of a vote of no confidence, the council voted to pursue litigation against the contractor, both to recover city funds and to investigate the work it carried out.

On Feb. 14, Ward 2 Councilman Melvin Priester Jr. confirmed to the Jackson Free Press that the city council has been moving forward on the issue. "We did, per the council's request, have a meeting between the City's legal department and the state auditor's office this week, and it  appears that we are going to continue on the path that we set out with at the meeting a week-and-a-half ago," Priester said.

An ongoing issue with the municipal water-billing system, dating back to botched work under the Siemens contract beginning in 2013, resulted in a billing system that regularly crashed. Because the billing system lived on faulty physical servers, the City had been unable to bill customers for water-sewer service.

Bakari's Expert Professional Solutions was one of several companies that the City contracted to remedy the problem, which included moving the billing system to a secure, cloud-based system.

The company also invoiced the City for $154,100—$106,100 more than the original agreement allowed. To date, the City has paid $100,000 to Expert Professional Solutions, which is registered through the Mississippi secretary of state's office to Willie Webster.

Blaine signed off on the invoices before they went to city council, which votes to approve or reject vendor payments.

Reached at the number registered to his business, Bakari declined comment.

Mayor Lumumba defended Blaine both at the Feb. 4 council meeting and at a press conference the following day. He said the contract did not have an end date in it, nor did it specify an exact amount that the City was to pay out to Expert Solutions.

The Jackson Free Press obtained a copy of the contract, which does not match the order the city council voted on in 2018, that includes the $48,000 figure. The contract makes no reference to a specific monetary amount and states instead that the City of Jackson must "pay all undisputed portions of the fees as set forth in the applicable Statement of Work." The Jackson Free Press has not yet seen a copy of the Statement of Work.

During the press conference, the mayor stood by Blaine and emphasized that his administration had self-reported the mistake to both the city attorney and city council. He also warned against efforts to characterize what he called an honest error as an intentional, deceptive move. "If this was based on a relationship or steering some type of legal contract, I don't think anyone steers a contract and self-reports an error. And then after self-reporting an error, they support legal action to take against the company," the mayor said.

Priester said he believes the error was "a good-faith mistake" that occurred as the City was in "the heat of a major crisis." But, he added, "the optics of the situation are really bad," given the "close ties" between the mayor and Bakari. Bakari had co-chaired the mayor's transition team in 2017 and was consistently present during his campaign for mayor. Before that, Bakari had headed the mayor's late father's transition team. "We've put a lot of trust in certain people, and that's what the mayor has asked us to do," Priester said of Blaine, adding that "when we have a situation where there is a mistake by those people, because we have put so much faith in them, we have to respond more harshly."

He also urged the press and the public to consider the error within the context of larger systemic issues relating to the City's internal business tracking systems, problems he believes ultimately led to such an error. "One of the things that frustrates me the most about this, and why I'm gutted that I have to call Dr. Blaine on this, is Dr. Blaine is the one who is doing the work to prevent problems like this from happening in the future," Priester said.

Jackson residents should boil their drinking water for at least one minute before consuming it, including before cooking or baking with water, brushing teeth, or washing dishes, until further notice, the City of Jackson announced late Feb. 14.

The City of Jackson issued the city-wide water boil notice on Feb. 14 after discovering above-normal turbidity levels in the City's surface water connections, based on a Jan. 28 water sample. Turbidity measures the clarity of a liquid, which the presence of organic or inorganic materials affects. The higher turbidity, the more cloudy a liquid will be.

The Jackson Free Press asked the mayor why it took the City 16 days to notify residents about the test. "We notified the citizens as soon as the health department notified us that it was a problem that we needed to inform (residents about), so we weren't holding anything back," the mayor said at a Friday press conference. The JFP learned of the turbidity levels from a Nextdoor post Friday evening from someone who had obtained a copy of the notice much earlier in the day. The JFP wrote city officials and communications at 8:55 p.m. Thursday to ask if a boil-water notice was in place that had not gone out to the media and the public, and a city spokeswoman responded with a copy of the same notice posted on Nextdoor earlier. Attempts to reach the City of Jackson water treatment plant were unsuccessful.