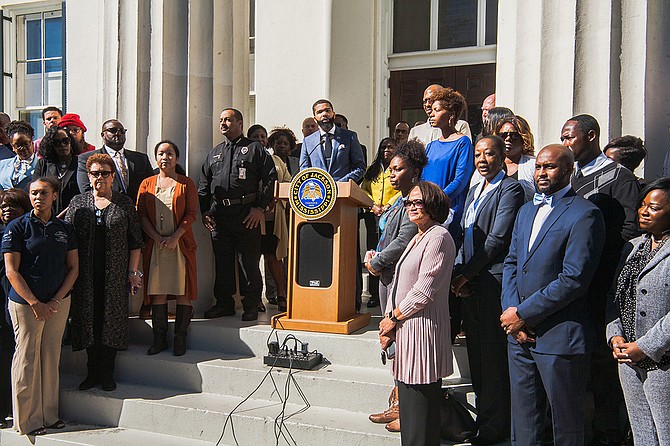 Mayor Chokwe Antar Lumumba discussed crime and cooperatives, and praised his transition team as he reflected on his first 100 days in office at a press conference outside City Hall on Oct. 24, 2017. Photo by Stephen Wilson

JACKSON — Standing on the sunny side of Jackson City Hall, Mayor Chokwe Antar Lumumba reflected on his first 100 days in office this morning, focusing on economic development and crime, with his transition team and other city officials surrounding him.

The mayor addressed his, and his late father's, vision for economic development in Jackson, including the possibility for city-owned cooperative models such as the Green Bay Packers, a publicly owned football team in Wisconsin. Lumumba clarified that he does not want to "herd the majority of (Jackson's) economy into a cooperative model," but rather that he believes the self-investment and cooperative model would demonstrate the value of investing in Jackson.

"The reality is people sometimes see difficulty in investing until you build it first," Lumumba said. "So we're intent on building it first so that people can see the worthwhile investment in supporting our city and developing our city."

Lumumba advocated for building "the most radical city on the planet," explaining that a radical is a person "who identifies a need for change and works towards that."

"If we see a need for change in our community," Lumumba said, "then we should be as radical as the circumstance dictates we should be."

On crime, the mayor wants to bring in a new recruiting class of police officers to protect the streets. Police Chief Lee Vance spoke about the upcoming police academy class that the City has approved.

"We have already started looking for recruits," Vance said. "We're going to do more of a formal roll-out in about a week. But our plan is to hire at least 50 new JPD officers this fiscal year."

The City's website says that JPD has staffing positions for 500 sworn officers, supported by 264 civilian personnel. In an August press conference, the chief said that JPD had 373 officers on payroll, but budgeted for 419, which today he said was 418. Vance, a 27-year veteran of JPD who grew up on Wood Street, said today that this next academy class might be split into two iterations.

But even with the upcoming increase in police numbers, Lumumba maintains the importance of taking a holistic approach to crime, especially in giving young Jacksonians positive things to do. "It's a much easier task telling a young person what to do than telling them what not to do," Lumumba said. "So, it is incumbent upon us to engage them so we're looking for opportunities in which we can do so."

Lumumba also praised his transition team, whom he referred to as a "wonderful bunch." He brought forward Safiya Omari and Akil Bakari, who chair his transition team and were both members of his father's transition effort. The mayor specified that he intends for the team's work to continue for several years, not just months. The group also includes two other current department heads: Chief Administrative Officer Robert Blaine and Planning Director Mukesh Kumar.

"I am confident that we have produced the greatest transition team that the city has seen to date," Lumumba said.

That team, he said, has focused on a data-driven analysis of where Jackson is at a city and how it compares to a cohort of cities similar in size, demographic, geography or having the capital status. "From that information we learned that in many regards, Jackson was performing better than we initially believed ourselves to be," Lumumba said. "And in other regards, we saw room for improvement."

The mayor declined to "go into the weeds" of the data because it would "fill this press conference." However, he credited the work of the city departments with the positive bond rating he said Jackson received recently. On Sept. 15, Moody's Investors Service rated the City of Jackson as "Baa2," which is a medium grade indicating moderate credit risk. But, Moody's also makes the distinction that Jackson is stronger than its rating in the areas of its financial position, tax base, and debt and pension liabilities.

City employee furloughs expired, the mayor announced, punctuating that the more government is cut over time, the more profits decline. In October 2015, the city implemented "furlough Fridays" to fill a $15-million budget deficit for the City's 2015 fiscal-year budget.

Mayor Lumumba will hold a "State of the City" address on Mon. Oct. 30 at 4 p.m. at Thalia Mara Hall.

The member's of Lumumba's transition team are: