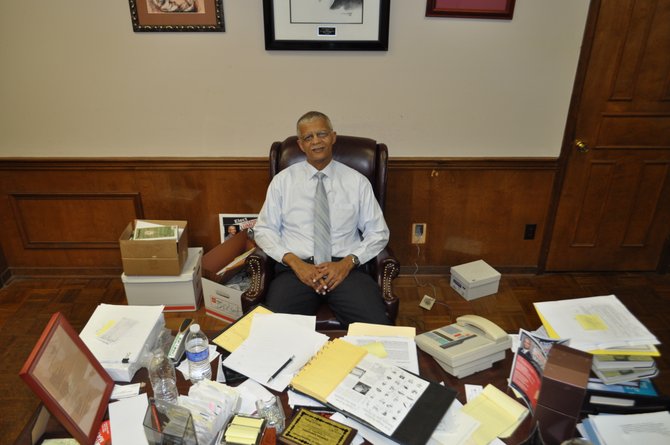 Chokwe Lumumba believes the best way to lift Jackson’s economy is to put money in the pockets of the city’s poor residents. Photo by Trip Burns

During his yearlong campaign, Mayor-elect Chokwe Lumumba did not tout big-box stores, movie theaters, waterfronts or Farish Street as the silver-bullet solution to economic development in the capital city.

"First off, you have to put money into the pockets of the poor. You have to make them not poor," Lumumba told the Jackson Free Press during an April interview. "What that does is that creates a better economy for everybody."

Lumumba's economic philosophy is partly rooted in the cooperative economic principal known as ujamaa--familyhood in Swahili--espoused by Tanzania's first president, Julius Nyere. Nyere, a committed socialist, wrote of ujamaa in 1968: "The doctrine of self-reliance does not mean isolationism. For us, self-reliance is a positive affirmation that for our own development, we shall depend upon our own resources."

As Lumumba prepares to take the reins of the mayor's office, Jackson might be poised for growth. The capital city's 8.6 unemployment rate, while lower than the state's 9.1 percent average, remains above the rate of unemployment nationally. Jackson's population is also trending upward--albeit slowly.

But Lumumba, who rejects what he deems "rank capitalism," isn't calling for a municipal version of the nationalization of Jackson's existing economy but rather for ensuring the local citizens can enjoy the benefits of economic development in the city.

"I'm not about to make a declaration that we're going to seize all the businesses in Jackson and turn them over the people. That's not going to happen," Lumumba said.

"In fact, I don't have the power to do that. But what I am going to do, I'm going to say to businesses that come here and businesses that are here is that we're in Jackson, and 60 percent of your employees need to come from Jackson. I'm not talking about mom-and-pop businesses but businesses with substantial (numbers of) people."

Currently, the city has a goal of 8 to 12 percent African American participation in city contracts. It is unclear whether the mayor can impose quotas on business owners.

Another important component of Lumumba's economic roadmap comes from the Jackson Plan, written by the Malcolm X Grassroots Movement--which Lumumba co-founded--and calling for the development of a "solidarity economy." The Jackson Plan states: "Our conception of Solidarity Economy is inspired by the Mondragon Federation of Cooperative Enterprises based in the Basque region of Spain but also draws from the best practices and experiences of the Solidarity Economy and other alternative economic initiatives already in motion in Latin America and the United States."

Mondragon, which employs 83,869 people and generates 14.8 billion euros (about $19.6 billion) in revenues annually, is comprised of worker-owned cooperatives that includes insurance businesses, manufacturing of appliances, bicycles and office furniture, as well as construction and retail.

Lumumba is hopeful that the city can grow its summer jobs program, which employs about 500 teenagers each year.

"Look, people want to work. That's not the problem. We've got to put people in the position where they can work and get the skills that's necessary," Lumumba said.

"That's my economic transition. As we transition in Jackson, I want to be an influence on transitioning other parts of the state."

Making of a Mayor

Doesn't surprise me one bit. his economic policy is partially rooted in a failed system. Nyere admitted in 1985 that Ujamma had failed. On top of that, he wants to put quota's on who businesses hire?

I no longer need to discuss his past affiliations, because his current ideals are just as ridiculous!

Quotas are, quite simply, wrong. When the advancement of an ideal/project is rooted in race or disproportionate impact (First off, you have to put money into the pockets of the poor. You have to make them not poor," Lumumba told the Jackson Free Press during an April interview. "What that does is that creates a better economy for everybody.) doom is certain. My goodness, has no one read The Fountainhead?

Your comment was at least interesting until you mentioned "The Fountainhead," darryl. Seriously?

As credible an economic theory as ujamaa, espoused by an unabashed socialist. Point being, redistribution for redistribution's sake is wrong, period.

Darryl, I'm guessing you're smart enough to come up with ways. Give it a shot. This isn't the hardest mind teaser ever.

Js, there are a number of reasons ujamaa failed to lift Tanzania out of poverty prior to 1985. Some of them (not nearly all) devolve on Nyere's leadership. Other reasons include factors outside of the control of any political leader within or without Tanzania. And still others came from the well documented collusion of foreign businesses to stay out of Tanzania entirely. You also conveniently leave out the marked successes of ujamaa in the realms of education and life expectancy (which outpaced most other African countries during Nyere's presidency). Ujamaa is also seeing a resurgence in modern Tanzania from a young population disaffected by the slew of corrupt leaders who followed Nyere. The greatest flaw in Nyere's initial push for ujamaa can be identified as an unwillingness to adapt to changing situations and the attempt to introduce it undemocratically (Nyere used a colonial era law to silence opposition). All of this is to say that the story of ujamaa is far more complex than the crude argument that 'Since it failed it's obviously worthless.' As for Mayor Lumumba's embrace of aspects of ujamaa? It might, in the end, be nice to see a politician make decisions based off of an ethic that places social capital on an even keel with financial capital (clearly the city of Mondragon is better off for it). Furthermore Lumumba has shown himself (through his life story) to be both adaptable to changing situations and eminently democratically minded (two qualities Nyere ultimately lacked).