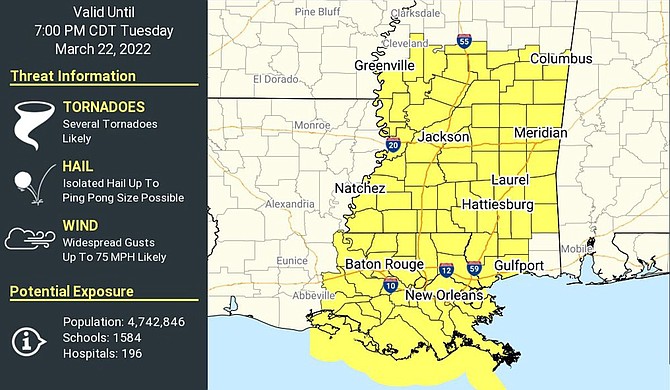 Mayor Chokwe A. Lumumba signed a proclamation of a local weather emergency this morning, as severe storms move eastward into Mississippi. The storms left injuries and destruction in their wake as the front traveled across Texas and Louisiana. Image credit National Weather Service.

In the midst of severe weather threatening Mississippi and the larger South, Jackson Mayor Chokwe A. Lumumba issued a proclamation of a local weather emergency this morning closing vulnerable locations and providing a notice of sandbag availability to help prepare for the storm.

“A storm front is expected to bring in damaging winds and heavy rains throughout the day Tuesday, which could lead to tornadoes, golf ball-sized hail, lightning and flooding, according to the National Weather Service,” the City of Jackson’s statement reads.

“The City and Department of Public Works will continue to monitor the weather and work crews will remain on standby to provide necessary response efforts. Those include the possible closing of viaducts in areas prone to flooding and the opening of necessary emergency shelters. In anticipation of extreme weather, the City has closed all early childhood development and senior centers.

Lumumba encouraged residents to remain cautious and vigilant in their storm preparations.

“Mayor Lumumba urges residents to remain vigilant and media aware,” the statement said. “He also advises residents to identify a safe spot in case of a tornado. Residents are encouraged to prepare a disaster kit with supplies that can last at least 72 hours.”

City-provided sandbags are available for pickup until 4 p.m. this evening. That pickup location is the Maintenance Supply building at 4225-B Michael Avalon Street. Residents may call 601-960-2395 or 601-960-1750 for additional assistance.

“Due to the threat of severe weather, all JPS schools will shift to virtual instruction on Tuesday, March 22, 2022, from 9 a.m. - 3 p.m. for all scholars,” JPS announced. “There will be no in-person learning.”

Extra-curricular activities of all kinds are also canceled due to the inclement weather.

Almost 9,000 outages have been reported so far, as the storm surges across the state. Western portions of the state such as Jefferson and Warren Counties have been the most affected, with upwards of 2,000 outages reported in those two counties alone.

The Mississippi Emergency Management Agency extends critical weather alerts as soon as they are detected. Those alerts are available here.