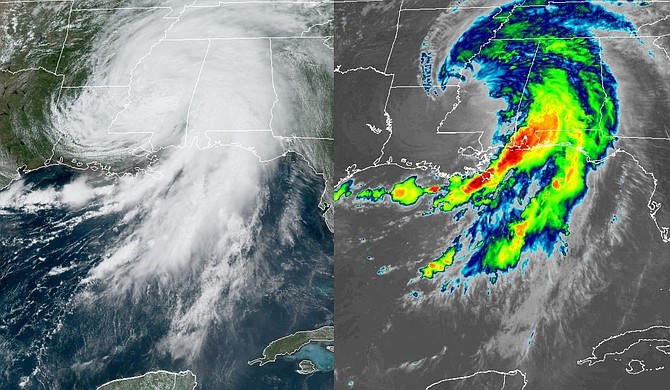 Hurricane Ida barreled into Louisiana on Sunday, leaving a swathe of destruction and causing at least one death before moving into Mississippi, where more than 100,000 residents lost power. Photo courtesy National Oceanic and Atmospheric Administration

Almost 113,000 Mississippians were without power Monday morning as Hurricane Ida wound its way through the state, after causing at least one death in Baton Rouge, La., and sowing damage throughout that state.

Jackson Mayor Chokwe Lumumba declared a state of emergency on Aug. 28 in a press release ahead of the storm.

“Today, City of Jackson Mayor Chokwe Antar Lumumba, issued a proclamation declaring a civil emergency for the entire City of Jackson in anticipation of Hurricane Ida,” the declaration reads. “Rain, high winds, flooding, and potential tornadoes are anticipated throughout the state of Mississippi, including the City of Jackson, beginning Sunday, August 29, 2021, and may continue through Tuesday, August 31, 2021, potentially resulting in dangerous conditions.”

City of Jackson officials are distributing sandbags to help guard against flooding to residents until Tuesday, Aug. 31, at 4225 Michael Avalon Street, Building A, in Jackson. This distribution will continue until 7 p.m. tonight, and resume at 8 a.m. Tuesday until 7 p.m. tomorrow evening. The notice cautions that this schedule is subject to change, depending on weather conditions.

Gov. Tate Reeves issued a state of emergency for Mississippi as well on Aug. 28, and tweeted out additional information this morning.

“As eye of #Ida hits central MS know we are 18-22 hours from it departing our state - stay diligent,” Reeves said via Twitter. “Tornado threat remains for Coast. Heavy rainfall up to 8”. Downed trees across roadways in SW MS. Downed power lines with 130,000+ without power. Stay aware! Be safe! God bless!”

The Mississippi Department of Transportation cautions Mississippi residents to stay at home and avoid road travel until the storm has passed, citing numerous fallen trees and road closures.

“We cannot stress this enough: PLEASE STAY OFF THE ROADS AND STAY HOME,” MDOT said in a statement on Facebook. “Your safety depends on it. There are trees down across the state and debris blocking many roadways. First responders are working to clear the roadways and help all those in need.”

COVID-19 vaccination and testing sites are also closed today due to Hurricane Ida.The Mississippi State Department of Health sent out a notice of closure this morning, noting that all sites for vaccinations and COVID-19 tests remain closed.