EDITOR'S NOTE: Our Journalism Seeks Solutions Over Blame and Partisanship 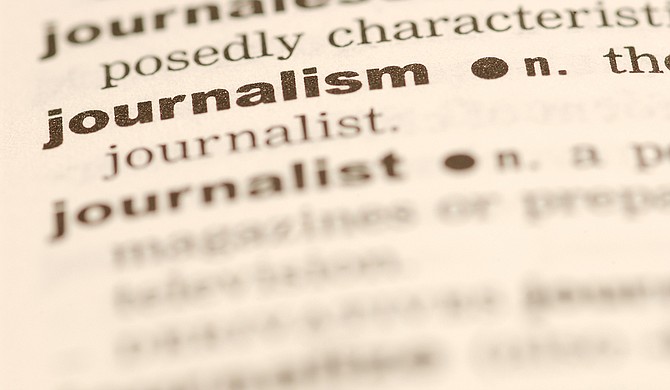 I'm a journalist to find solutions for issues such as youth crime. And that means seeking the various causes first to get there. That is why the journalism in the Jackson Free Press is different. File Photo

"Is youth crime the fault of the child or the parent?" A teacher gave that free-write prompt to young people I worked with in the Mississippi Youth Media Project last spring. Most of them had either witnessed or been a victim of violent crime and had just read a story I had written about violence. Even though my story had delved into myriad causes and potential solutions, the teacher wanted them to pick which of two parties was at fault.

In so doing, she unwittingly encapsulated just about everything that is wrong with journalism in one sentence. The worst reporting just looks for two sides to blame each other. In this case, either the child or the parent must be to blame. The implication is the two parties cannot share the responsibility with little thought that many parties may be complicit to varying levels.

The sentence thus violates a cardinal rule of good reporting—avoid yes-or-no or leading questions. Take TV. Many will-be broadcasters are taught to just go get a good sound bite, or ask someone "how it feels" when they lose a loved one rather than "how can we prevent crime?"—which admittedly is the harder question.

Little results from such journalism, other than ratings or clicks. Maybe the audience gets a warm-and-fuzzy feeling if it's a "positive" story, or feels anger or hopelessness if it's a "tragic" story. Put simply, such blame-seeking, binary questions do not reveal complicated causes, inspire action and certainly do not present possible solutions.

I chose to be a journalist to find solutions for issues such as youth crime. And that means seeking the various causes first to get there.

That is why the journalism in the Jackson Free Press is different. We reject the "both-sides-ism" we're hearing a lot about after the practice helped Donald Trump slip into the White House. In "horse race" political coverage, media outlets tend to take the easiest route: report the dumpster fires and nasty opposition research as they pop up. And divide the story down a fake middle with an equal number of Republicans and Dems staring each other down. That is not the same thing as actually reporting the various positions on an issue and being fair to those criticized, allowing them a chance to respond, which is vital.

Some outlets even count the number of partisans on each side, to the confusion of those of us who reject partisan shtick. If you haven't figured it out, yet, that dog don't hunt—or educate kids or stop Russia from controlling the White House. It's a false paradigm pushed by those obsessed with party politics and politicians. Those who feign "neutrality" and fake "objectivity" sure don't (a) seek and report true causes, (b) know what to do with complicated nuance or those who eschew party devotion or (c) focus pretty much at all on solutions. Why? Because "horse race" journalism is designed to stoke what linguist Deborah Tannen calls the "argument culture." It follows an either-or frame, and it's usually damn useless, except for page views and dividing people into two neat, useless groups that growl at each other.

It's why I'm obsessed with a growing type of reporting called "solutions journalism." I just spent three days at the Solutions Journalism Summit at Robert Redford's beautiful Sundance Resort in Utah ("Think you used enough dynamic there, Butch!?") with about 100 inspiring, passionate journalists from across the U.S. and a few from Europe. I was the only representative from Mississippi, and it was exhilarating to plan collaborations with solutions-focused journalists.   The network's website opens with hints about how this type of journalism is different from the problem-focused reporting we too often see. Per the network, "solutions journalism" is "rigorous reporting on responses to social problems," "a way to spark constructive discourse," "a way to build trust with your audience," "a universe of stories not being told," "part of a higher-quality news product" and "just better journalism."

It is not hero worship of a cool-sounding "solution." In fact, when I revealed a failed local crime initiative ("MACE") where law enforcement diverted a grant that was supposed to include services for at-risk teens to just do police sweeps, I was following a "sojo" best practice to vet alleged solutions. Other local media did breathless reporting when MACE went public—decidedly not rigorous solutions journalism.

Some journalists are a harder sell than I was when it comes to solutions journalism. Throughout the now-30-plus years of my career, I have rejected the he-said-she-said, USA Today-style tradition of splitting stories down a fake middle to keep "both sides" from complaining. I always wanted to go deeper and report, and try to inspire, viable solutions. Truth is too messy and problems too complex to fit neatly into two identical containers, and often what passes as a "side" is just political propaganda.

What I do believe in, and teach and practice here at my newspaper, is digging deep into an issue and reporting what we find regardless of where it happens to bounce on the partisan roulette table. That's how I ended up a guest on a pro-NRA radio show after reporting on a black preacher who armed himself to take on the Klan in the 1960s. It's also why we pursued reporting few others would touch that landed a rather-crazy, gun-toting, alcoholic mayor—who happened to be a black Democrat—in a state and later a federal trial. 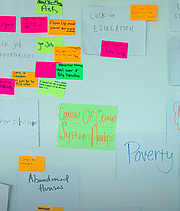 The Mississippi Youth Media Project dug deep for both causes and solutions to youth violence.

That pursuit of truth, regardless of party, led to authorities removing the young men living in his house with him. Thinking back, I might've dug deeper into solutions to keep powerful men from declaring themselves "foster parents" in the first place. Or I could have investigated better ways to interrupt the crime cycle than the snake oil Frank Melton was doling out. (I am now.)

Problem-focused sensationalism is so common that I forgave the teacher's binary crime topic. I decided to build on it, though. I asked the students to do a new free write: "Young people commit crime because ...." They wrote emotional, informed pieces and then read them aloud. I then asked them to write each cause on a sheet of paper for a systems analysis of the dozens of reasons for youth crime on the floor, which they later moved to a wall.

The YMP crime wall then inspired later students to create a powerful long-form story and a 10-minute documentary about the causes, and potential solutions, of youth crime, which appears with the rest of their journalism at jxnpulse.com. They interviewed the mayor, the state FBI leader and former criminals, as well as people engaged in preventing youth crime. The students ignored politics as they told powerful stories with embedded causes and possible solutions.

It was real, rigorous and so much better than two "sides" sniping at each other from one paragraph to another.