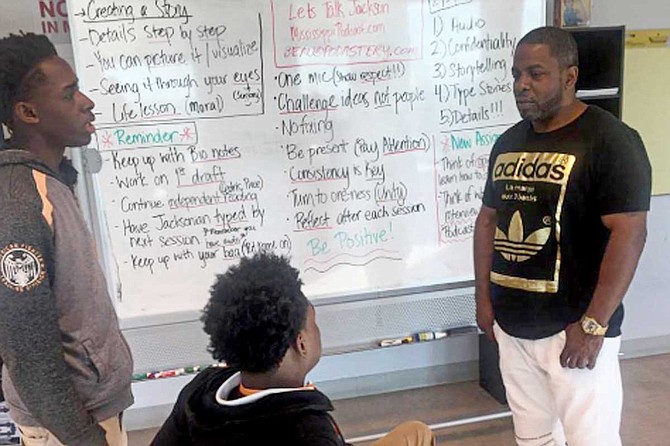 Cedric Willis, who was in prison for 12 years for a murder he didn’t commit, talks to Youth Media Project students Dartavious Archie (left) and Marquavious Harris in spring 2017. The students were part of the Wingfield High School FAME program. Photo by Donna Ladd

The late Cedric Willis is the honoree of a youth-crime forum tonight in Jackson where participants will brainstorm both causes and solutions of violence in the capital city. It is the fourth crime conversation, with participants of various generations gathering in dialogue circles, that the Mississippi Youth Media Project has organized in the last year or so. The student journalists are compiling a long list of potential violence solutions, and asking attendees to pledge to at least one action, as past participants have done. They plan to hold an all-day violence summit in future months to develop a long-term strategy for correcting conditions that lead to violence in the city.

Tonight's crime forum is at Walton Elementary School at 3200 Bailey Avenue from 6 p.m. to 8 p.m. One Voice Mississippi is providing the snacks and drinks.

Willis was a Jackson native who served 12 years in prison for a murder he didn't commit, then was free for 13 years before he was murdered at the corner of Dewitt and Bailey avenues near his home in Jackson. He was 44. Police arrested two men for his murder, Debreco Williams, 33, and Corey Brent, 28, on July 11.

A friend of the Youth Media Project, Willis spoke often with the student journalists about his experiences on the streets of Jackson and inside Parchman prison. He also explained to the students why the story then-Jackson Free Press journalist Brian Johnson did about him in 2006 was so vital to him.

"Take the time to get it right," Cedric would tell the interns and teenagers. "Tell the whole story. It's not your story; it's mine. Get your facts right."

Then he'd talk about Brian showing up and staying for hours or insisting that they go visit the house where Cedric had lived when the cops came, although his mother had long since moved, or asking him on deadline the brand of sneakers he wore then.

Members of Willis' family plan to attend the forum. Attendees will discuss the following questions in small groups with all voices welcome. (Volunteers to help set up at 5 p.m. are also welcome.)

Read about potential solutions for Jackson violence at jfp.ms/preventingviolence.