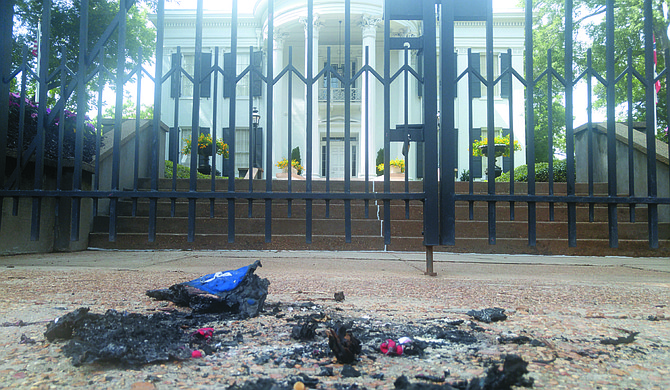 The Mississippi branch of the Poor People's Campaign burned a replica of the Confederate Flag and a Mississippi flag outside the Mississippi Governor's Mansion Monday afternoon. Photo by Marie Weidmayer

JACKSON — The charred remains of a replica Confederate flag and a Mississippi flag lay on the sidewalk outside the Mississippi Governor's Mansion Monday afternoon in protest of white supremacy.

The flag does not represent all the people of Mississippi, and in fact alienates poor people, especially poor black people, Hattiesburg resident AnnaBeth Row told the Jackson Free Press. In Mississippi, white supremacy tells poor white people that they may be poor but at least they are not black and poor, which makes it harder for people to come together, she added.

Around 20 people gathered in protest, and chants of "hate has no home here" echoed through downtown Jackson. The protest came 48 hours after Gov. Phil Bryant, who attended a white supremacist Citizens Council high school in south Jackson, received the Gov. John J. Pettus Heritage Award from the Sons of Confederate Veterans.

Gov. John Jones Pettus was the 23rd governor of Mississippi who presided over Mississippi's secession on Jan. 9, 1861, to join the Confederacy. A Tennessee native, Pettus moved to Mississippi as a child and owned at least two dozen slaves in Rankin County as an adult. Pettus was one of the state's "fire-eater" pro-slavery politicians, who were the South's strongest proponents of secession in order to both maintain slavery in the South and guarantee that it was extended to new western territories. The fire-eaters also wanted to ensure that Mississippi's fugitive slaves would be returned to their owners after apprehension in other states. Pettus argued that Mississippi could only keep slavery a reality if it seceded and joined the Confederacy.

Pettus' brother, Edmund Winston Pettus—a fire-eater slave owner and later a U.S. senator in Alabama—served as a delegate at the Mississippi secession convention his brother convened. Active in the Ku Klux Klan after the Civil War, he is the namesake of the Edmund Winston Pettus Bridge in Selma, the site of major civil-rights protests in the 1960s.

In 1860, one in two families (49 percent) in Mississippi owned at least one slave. In 1857, Mississippi had passed an anti-manumission law to make freeing slaves illegal, as other southern states were doing up until the Civil War.

Pettus called Mississippi legislators together on Nov. 26, 1860, to vote on becoming one of the first six slave states to secede. Lawmakers stated their reason for secession in Mississippi's Declaration of Secession: "Our position is thoroughly identified with the institution of slavery - the greatest material interest of the world. Its labor supplies the product, which constitutes by far the largest and most important portions of commerce of the earth. These products are peculiar to the climate verging on the tropical regions, and by an imperious law of nature, none but the black race can bear exposure to the tropical sun. These products have become necessities of the world, and a blow at slavery is a blow at commerce and civilization."

The Jackson Free Press broke the news in February 2016 that Bryant was continuing the old tradition of declaring "Confederate Heritage Month" in April at the behest of the Sons of Confederate Veterans, a proclamation that was not then routinely listed among others on the governor's website.

"I think it was a very brave action for this group to come out and burn this flag here in front of Governor Phil Bryant's mansion," Row said. "He is not just a proud member of Sons of Confederate Veterans; he also just won one of their awards. He is king white supremacy in Mississippi and this is making a direct statement to him as well as his followers, as well as letting him know, we see you."

Mississippi native Matt Salter said he attended the protest because he is planning to become a teacher in Mississippi and as an educator, he needs to be able to say he participated.

"If you're going to invest in the future of teaching kids, you have to have been involved in the process," Salter told the Jackson Free Press. "You have to have actually participated at least in some small way."

Historic reporting by Donna Ladd. Read more about the Confederacy and slavery in Mississippi at jfp.ms/slavery. Email Marie Weidmayer at [email protected].