A National (and State) Housecleaning? 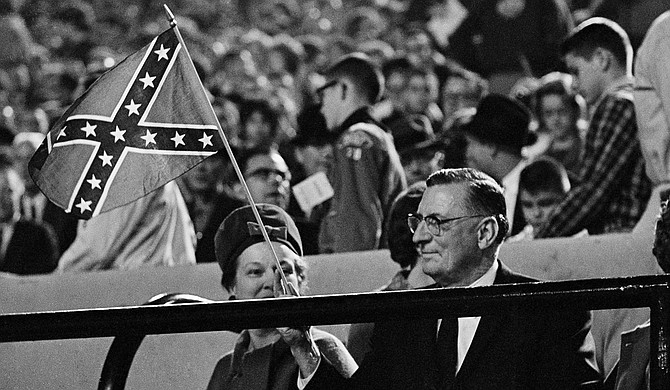 Gov. Ross Barnett was a leading defender of segregation in the 1960s and fought to keep James Meredith out of Ole Miss. Here, he waves a Confederate flag at the Sept, 29, 1962, Ole Miss vs. Kentucky football game to a frenzied crowd waving the flags against integration. Now, a large reservoir near Jackson is named after Barnett. Photo courtesy Associated Press/Jim Bourdier

"The Civil War had nothing to do with slavery."

That's probably the most absurd—and false—claim we've seen in social media over the two weeks since a Confederate flag-loving domestic terrorist allegedly killed nine black people in a Charleston, S.C., church. Due to the fact that a Confederate flag continued to fly high on Capitol grounds there even as the preacher of the church lay in state inside, and all the photos proving the killer's obsession with the flag, the nation has suddenly started paying attention to what the flag represents. That means that even here in Mississippi, some Republicans are saying it may instead belong in a museum.

What's transpired in the last week is a public conversation about the intentions of the war the flag represents—specifically the Confederate "lost cause." After Reconstruction ended and the South returned to self-rule (and Jim Crow), the United Daughters of the Confederacy were founded in 1894 and got busy erecting memorials to Confederate soldiers throughout the South, along with a romantic "lost cause" narrative. In addition, the fans of Nathan Bedford Forrest—a Confederate general who helped lead the early Ku Klux Klan—have busily worked to rewrite his history, erecting statues to him as well as naming parks and counties (including Forrest County, site of Hattiesburg) after him.

This Confederate revisionism helped make the war not about slavery to many, but about federal encroachment of "state's rights." In Mississippi, the lack of accurate history texts and lessons in schools, both public and private, only helped cement the myth of why the South fought the Civil War.

But the Confederates' own words (jfp.ms/slavery), captured in their Declarations of the Causes of Secession and various speeches and official documents, prove that the Civil War was fought over the right to continue slavery, expand it into new states (by federal law) and ensure that free states returned southerners' property—runaway slaves—to them. This, indeed, was the antithesis of "state's rights": The South, which held great sway in Washington for decades, was asserting its desire to see the anti-slavery states bend to the task of enforcing pro-slave provisions they found immoral. Instead, the "state's rights" argument was grafted onto the war much later, as it would support the southern states' assertions for Jim Crow laws and onerous Black Codes and, later, against integration and Civil Rights reforms.

Likewise, Confederates' own words also show that the southern cause was about white supremacy over supposedly inferior black people. Confederacy Vice President Alexander Stephens made this motivation clear in his 1861 "Cornerstone Speech" in Savannah, Ga.: "With us, all of the white race, however high or low, rich or poor, are equal in the eye of the law. Not so with the negro. Subordination is his place."

Here in Mississippi, the official Declaration of Secession explained the state's reason for seceding from the union in blunt terms: "Our position is thoroughly identified with the institution of slavery—the greatest material interest of the world. Its labor supplies the product, which constitutes by far the largest and most important portions of commerce of the earth. These products are peculiar to the climate verging on the tropical regions, and by an imperious law of nature, none but the black race can bear exposure to the tropical sun. These products have become necessities of the world, and a blow at slavery is a blow at commerce and civilization."

It is long overdue, but the nation is talking about slavery now and what the Confederate flag really stands for, what should be renamed and what should come down. It's not an easy conversation, but the first step is knowledge of just what is being celebrated when we venerate the Confederacy.

Also see: Memorials to the Confederacy in Jackson and Mississippi