Rebel Monuments in Jackson and Mississippi 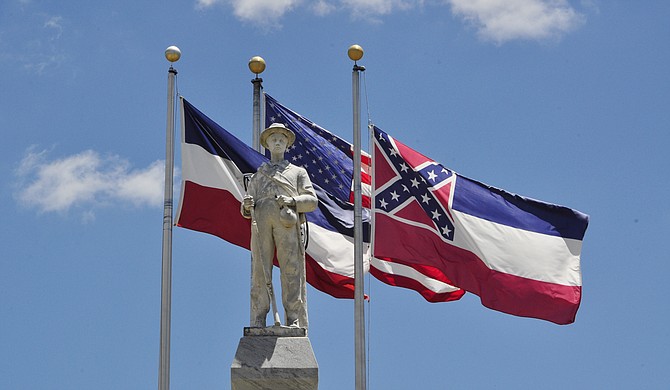 A statue of a Confederate solder stands in the square in downtown Brandon in front of a Mississippi flag containing the controversial Confederate battle symbol. Photo courtesy Trip Burns/File Photo

This is a probably incomplete list of metro-area memorials to the war for white supremacy, compiled at the Mississippi Department of Archives and History. Add others from around the state at jfp.ms/confeds.

Jackson (1891) on Old Capitol grounds in front of Archives Building. An elaborate architectonic piece consisting of a soldier standing in a variant "at rest" posture, leaning on his rifle, atop a very tall obelisk, which rises above a mausoleum-like vault in an exaggerated Gothic styles.

Jackson, Women of the Confederacy Monument, on New Capitol grounds. An elegant bronze sculptural group consisting of two female figures in classical grab attending a wounded soldier, on a high carved stone base. The bronze is identical to the Tennessee monument to the Women of Confederacy in Nashville.

Jackson (1931), in the Confederate area at Greenwood Cemetery. An austere stone tablet on a base, encircled by a hedge.

Raymond (1908), located on Hinds County Courthouse grounds. A bronze soldier standing "at rest" atop a tall sculptured stone pedestal, on a stepped base.

Edwards, vicinity, Gen. Lloyed Tilghman monument on Champion Hill battlefield. A rough granite boulder to which a bronze tablet has been affixed, enclosed within a fence.

Canton, Howcott Monument to Loyal Servants of the Harvey Scouts. An obelisk atop a pedestal on a stepped base.

Canton (1881), Monument to Confederate Dead, in City Cemetery. A broken column atop a pedestal, on a stepped base.

Downtown Brandon, (1907), at the intersection of Government and North streets, in front of the courthouse. A soldier standing "at rest" atop a tall sculptured obelisk-like shaft on a pedestal, on a stepped base.

Forrest County (Hattiesburg) was split off from Perry County in 1908 and named in honor of Nathan B. Forrest, a Confederate general in the American Civil War and a leader of the original Ku Klux Klan.

Ross Barnett Reservoir is named for the segregationist governor who worked to block black-freedom activities, including the enrollment of James Meredith at Ole Miss, which turned into a deadly riot. He is known nationally for presiding over a state bent on armed insurrection against federal civil-rights laws.

Jefferson Davis County is named for Jefferson Davis, president of the Confederate States of America, who lambasted the South's opposition for describing "the institution of slavery as degrading to labor, as intolerant and inhuman" in a 1858 speech to the Mississippi Legislature.

Add others from around the state at jfp.ms/slavery.